St. Louis Alderman Brandon Bosley Arrested, But Does Not Yet Face Charges

In theory, announcing your own arrest on Facebook could be seen as a power move. But in a two-sentence post to Facebook earlier today, Ward 3 Alderman Brandon Bosley announced his own recent run-in with police with a startling assertion: "Discipline your children or they will become victims or suspects."

The St. Louis Metropolitan Police confirmed this afternoon that they did, in fact arrest Bosley, even supplying RFT with a mugshot — but police spokesman Jack Wang declined to answer questions about the time, location and circumstances of Bosley's arrest. He referred those questions to the St. Louis Circuit Attorney's Office.

However, while Wang said that while warrants were indeed presented to the city's top prosecutor, "They were not issued at this time."

In an interview, Bosley read from a prepared statement that acknowledged the arrest, though not its cause. He turned himself in to the police department on Sunday, he said.

"While this is a personal matter, I make no apologies for being an engaged, caring and loving parent," Bosley's statement continued. "Like many parents, our children are the center of our universe, and we work tirelessly every day to make our children safe."

After delivering the prepared statement, the alderman declined to provide further details on incident, including whether it involved one of his children.

Instead, Bosley answered: "There are still children in this city dying because of lack of parenting. What we don't need to have is people who are advocating to save children not doing what's necessary, in their own homes, to save their own children. as a parent, growing up, there are certain traditions that took place in my household that kept me on the straight and narrow. I have to take that into considerations when trying to raise my own children."

So far, the arrest hasn't yielded charges. In response to RFT's request for comment, Circuit Attorney spokeswoman Susan Ryan said only, "The matter has been taken under advisement at this time."

Bosley's Facebook post has gathered comments from former Missouri Representative Bruce Franks (D-St. Louis), who queried, "Discipline as in?" A later comment, written by Ward 21 Alderman John Collins Mohammad — who is dealing with his own legal troubles relating to an arrest for driving on a revoked license — voiced his support for his fellow board member, writing, "I know you and your kids. Your a great dad fam." Bosley has not responded to any of the Facebook comments.

We will update this story if we learn more about the status of the charges and the circumstances of the arrest. 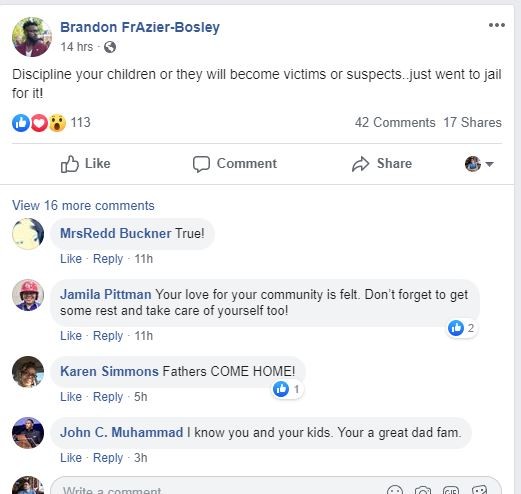 Bosley comes from a storied political family. His father is former Alderman Freeman Bosley Sr., and his mother Lucinda Frazier serves as the ward’s committeewoman. Freeman Bosley Jr., his half-brother, served as St. Louis mayor from 1993 to 1997 and his sister Lakeysha Bosley was elected state representative last November.

Brandon Bosley was elected alderman in April 2017, defeating five other candidates in the Democratic primary. His arrest was first reported in MetroSTL.com, which publishes the Northsider and the Southsider weeklies.

Editor's note: The story was updated after publication to include statements from Alderman Bosley.