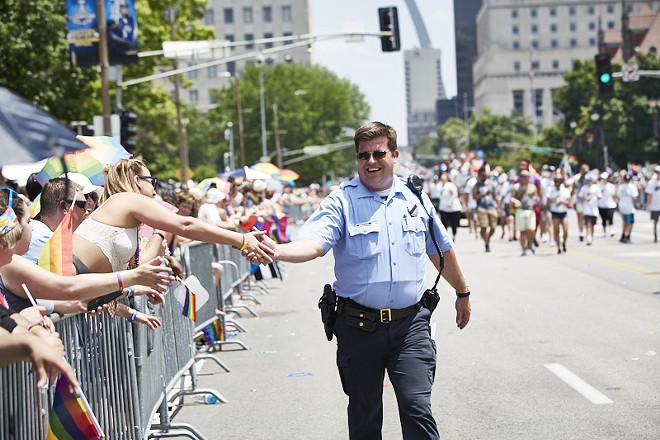 Mayor Lyda Krewson is denying the accusations of a former Pride St. Louis board member, who claims the mayor pressured the organization to allow uniformed officers to march in Sunday's parade.

"I wouldn't do it," Krewson told the Riverfront Times in a phone interview. "I didn't do it."

But Jolene Gosha, who resigned from Pride's board last night, says that's not true. Gosha directed the parade this year, a massive undertaking that takes months of planning and work. This year was extra chaotic following Pride's announcement on June 8 that, in honor of the 50th anniversary of the Stonewall Riots, uniformed officers would not be allowed to march.

The decision was massively controversial, instantly dividing people both within and outside of the LGBTQ community.

On June 17, Gosha attended a frantic meeting of Pride's board. She says Pride President Matt Harper read a text message he'd received earlier that day from Krewson. Gosha didn't record the exact wording, but she says the message relayed by Harper and Dennis Gorg, Pride's compliance director, was that the mayor was threatening to pull their permits and contact their sponsors. Follow-up conversations with the mayor did not yield any better results, board members were told, according to Gosha.

Not being able to host the parade would have caused Pride's financial ruin, Gosha says. It would have had to repay several hundred thousand dollars to sponsors, vendors and participants, all of it already spent to mount the event.

"Ultimately, the only choice we were left with was reverse the decision or go bankrupt," she says.

The decision to exclude uniformed cops from marching (officers would still attend the event for security, and LGTBQ officers could march out of uniform) had been decided without a formal vote, according to Gosha. So, on June 17, she says, the board held two votes: One to formalize its previous decision to drop uniformed officers and the second to rescind it.

Gosha says she and another board member still voted "no" on the reversal, and three others abstained. But the majority voted to invite the uniformed cops back.

The next day, Pride's board held a joint news conference with Krewson and St. Louis Public Safety Director Jimmie Edwards to announce the original ban was being reversed. Asked by the RFT at the news conference if she had ever suggested the parade's permits could be reconsidered if uniformed officers weren't allowed to march, Krewson insisted she had not.

But Gosha dismissed that in Facebook posts last night and this morning. In a comment on Krewson's page, she accused the mayor of "casual blackmail."

The mayor denies she did anything of the kind.

"It's just not an allegation that's true," she says.

Krewson says she did send a text message to Pride officials, urging them to reconsider. But she insists it was a request and a discussion, and absolutely not a threat. She read the text to the RFT: "Is there any possibility you will reverse your decision and allow police uniforms in the parade? We're being bombarded by calls for an executive order, investigations into sponsors and to support our police. This decision is proving very divisive. I hope you will reconsider."

The mayor says that was in no way a threat, and she also notes the text did not mention permits. In referencing calls for an investigation into sponsors, she says she was relaying the comments the city was getting from a social media firestorm.

A longtime participant in the parade, Krewson says she would have continued to work with Pride even if the board didn't reverse its decision. Still, the text was apparently persuasive to the majority of the board. They voted the same day to reverse the ban on uniforms.

Responding to questions from the RFT, Gorg says Pride will release a statement. We'll update the post when we get it.

Pride's reversal also proved controversial. The Metro Trans Umbrella Group, set to be the parade's grand marshal along with the larger trans community, decided last week it would not participate. The organization had welcomed the exclusion of officers. A high percentage of trans people continue to report feeling harassed or ignored by police, even as they find themselves targeted for violent crime.

The original decision to drop uniformed police was seen as not only as an answer to one of MTUG's long-running requests, but larger recognition for a segment of the population that often finds itself pushed to the fringes even within the LGBTQ community.

Gosha says she frequently thought of resigning from Pride after the reversal, but remained in hopes of highlighting and supporting those in the trans community. She says a number of Pride board members were angry with her and retaliated all weekend through a series of small slights, such as withholding the t-shirts for volunteers who worked with her.

She ultimately stayed through the parade, only to announce her resignation last night. She had volunteered with Pride for nine years but says she was disgusted by what happened in the past few weeks.

"I felt like the community as a whole wanted to shit on the trans-expansive community," she says. "And every way they could, they did it."