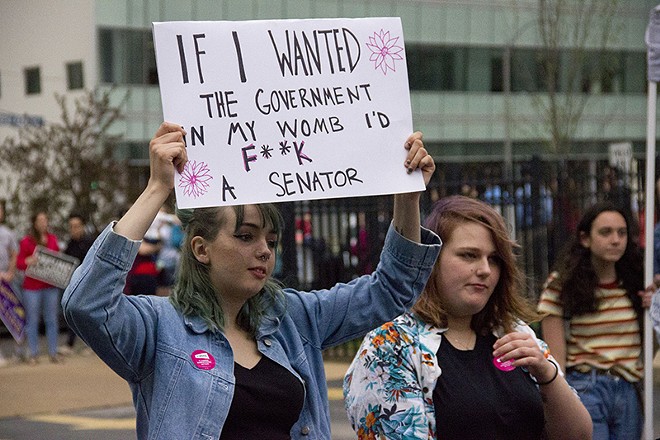 A Missouri state commission has ruled that Planned Parenthood can keep performing abortions while its appeal is pending.

Missouri Administrative Hearing Commissioner Sreenivasa Rao Dandamudi granted Planned Parenthood's motion to stay the case this morning, writing that it "has an active license that shall remain in effect for the pendency" of its case with the commission, as the Post-Dispatch first reported.

The commission hears appeals of bureaucratic actions, such as the state Department of Health and Senior Services (DHSS)'s decision to deny Planned Parenthood's license renewal last week. The next hearing in the appeal is now set for August 1.

After Planned Parenthood took its case against Missouri to the courts, St. Louis Circuit Judge Michael Stelzer had ordered DHSS to make a decision one way or another, leading to last week's license denial. But Stezler had preserved the status quo in the mean time, ruling that the clinic could stay open and continue to perform abortions through today.

Dandamudi's ruling today will maintain that status quo as the Administrative Hearing Commission examines the facts of DHSS's rejection. And even that is not the end of the matter: If the commission rules against Planned Parenthood, its next move will surely be to return to Judge Stelzer for another appeal.

DHSS has claimed that a series of "failed abortions" caught its attention and that it is merely looking out for women. Planned Parenthood has pushed back fiercely on that contention, saying the state has "weaponized" the licensing process.

In a statement, Dr. Colleen McNicholas of Reproductive Health Services of Planned Parenthood of the St. Louis Region said this:

We are relieved to have this last-minute reprieve, which means patients can continue accessing safe, legal abortion at Planned Parenthood in St. Louis for the time being. This has been a week-to-week fight for our patients and every Missourian who needs access to abortion care. There are two things that remain unchanged in Missouri: the uncertainty our patients face, and our will to continue fighting for their right to access safe, legal abortion.

Patients should never have to worry that they may lose access to health care tomorrow because of a politically driven campaign to end abortion access. Yet, here we are, facing this reality week after week because of Gov. Parson’s agenda to ban abortion. It is unjust and cruel, and as the court and now the Administrative Commission Hearing recognize, unlawful. Planned Parenthood will continue responding to these political attacks on reproductive rights and health care with unrelenting vigor. Because abortion is health care and every person deserves the right and freedom to decide when and whether to be pregnant — no matter what.


We welcome tips and feedback. Email the writer at sarah.fenske@riverfronttimes.com