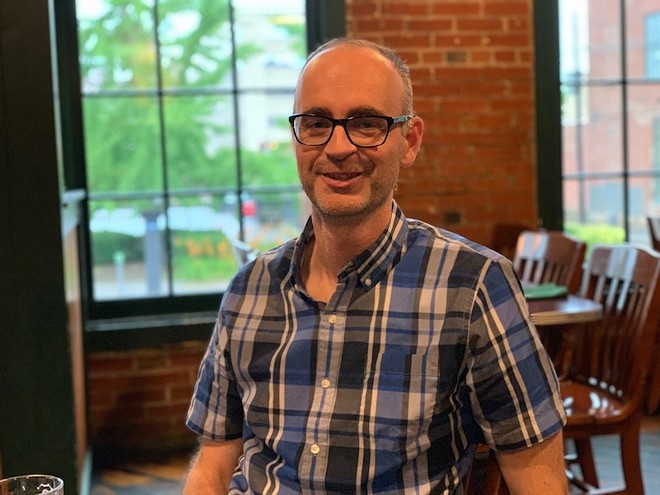 Here's some news: Doyle Murphy will become the RFT's interim editor, effective July 13. Doyle is taking over for me; I'll begin a new job as host/producer of St. Louis on the Air on July 15.

I hired Doyle, and I've been thrilled with the work he's done in his nearly four years here. A Kansas native, he has been a newspaper reporter for fifteen years: at the Greeley Tribune in Colorado, the Times Herald-Record in Newburgh, New York, and the New York Daily News in New York City. At the RFT, he's become a respected presence both inside the office and outside it. He's got a dry wit, total mastery of public records and an elegant way with a phrase (witness this, and this, and so many more). I will miss editing him.

I will also miss so much about the RFT. I came back to this paper in April 2015 after a brief stint as managing editor from 2010 to 2011, and have now spent four years as its editor in chief. I've been incredibly lucky in that tenure — the editorial staff size has remained constant, the size of the print publication has actually increased, and all of my favorite bylines (Danny Wicentowski, Cheryl Baehr, Daniel Hill and Paul Friswold) have continued to raise hell and crack wise. I was also lucky enough to see the hiring of digital editor Jaime Lees and art director Evan Sult — and, earlier this year, the return of founder Ray Hartmann as our columnist. Add in our excellent longtime contributors, including columnists Christian Schaeffer and Robert Hunt, writers Thomas Crone and Mike Fitzgerald and more, and I think in many ways the paper is as good as it's been in a long time. Some weeks, even better than that.

I'll still be here for two more weeks (and two days!), so go ahead, give me a hard time in the comments section. I'll also be helping to begin the process of hiring a new associate editor with a focus on food — so if that's you, please reach out to Doyle or me.

But after July 12, if you catch a typo or we call it "Gravois Road" at a point where it's actually "Gravois Avenue" (guilty, oh so very guilty!) or even if you just hate our "bias journalism," well, Doyle's email is doyle.murphy@riverfronttimes.com. And after that, you can catch me on the air at 90.7 FM.

Sarah Fenske is still the editor in chief of the Riverfront Times, for now. Reach her via email at sarah.fenske@riverfronttimes.com or follow her on Twitter @sarahfenske.