Kashina Harper, Vilified for Livestreaming After Cop's Shooting, Speaks Out 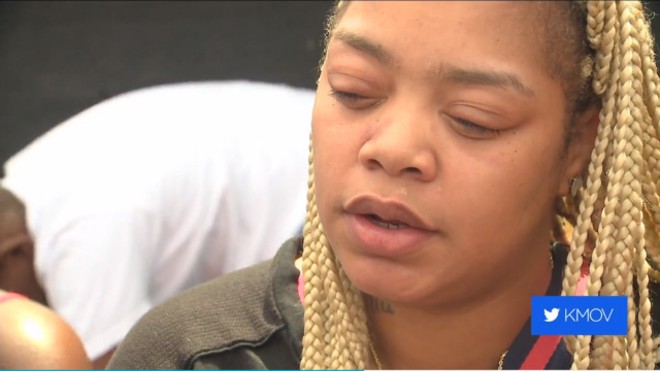 A St. Louis store clerk who livestreamed the aftermath of police officer's shooting says her intentions were good.

Kashina Harper, 34, was working Sunday afternoon at Clay's Wellston Food Market when, police say, a man accused of trying to pass a bad check killed North County Police Cooperative Officer Michael Langsdorf. The officer struggled on the floor with 26-year-old suspect Bonette Meeks before Meeks was able to clock Langsdorf with a pistol, stand up and shoot him in the back of the neck, police say.

Meeks has been charged with multiple felonies, including murder.

But it's Harper who has faced an online firestorm. The clerk turned on Facebook Live after the shooting, filming what would turn out to be two of the last minutes of the veteran officer's life.

A link to the video was later included in a story on the St. Louis Post-Dispatch's website, unleashing a torrent of fury aimed at both the newspaper and Harper.

The Post-Dispatch quickly removed the link and has apologized, saying an editor used bad news judgement in adding the link to a reporter's story.

In a subsequent interview with the paper, a tearful Harper explained that she had rushed to Langsdorf's side and used his radio to call for help. She only turned on her livestream after a customer took over.

"I'm the one who tried to save that man," she told the paper. "I went to his walkie-talkie. I said, 'A police is down. Somebody shot him. 6250 Page. Can you please hurry up?' I was calling for help. I held his hands."

"I hope you get hunted down like the stupid cunt you are!!!! I'll pray for it," wrote one person.

"Kashina Harper - I hope you die a slow, painful death and that someone has the good fortune to film it and post it to social media," wrote another.

Harper has spent the past two days apologizing and trying to explain.

"He's at work and lost his life, and people thought I put on Facebook for attention," she told KMOV.

# ICYMI: Witness explains why she recorded moments after officer was shot, then posted it on Facebook
https://t.co/qck1803M09


She says she didn't know at the time that Langsdorf was going to die, and she had hoped the video would help him in the future case against his attacker. But that's not the way it was initially received. People accused her of callously letting him die and exploiting his death.

The actual video, which has been removed from her page, wasn't that. The gut-wrenching footage showed a customer kneeling next Langsdorf and trying again to use his radio to call for help. Harper could be heard trying to comfort the officer and pleading for help to arrive soon. The stream ended as backup officers arrived.

In a Facebook post this morning, Harper again tried to explain. She described running to Langsdorf's side, putting his radio next to his mouth so he could relay a code to dispatch. She apologized to the officer's family and friends.