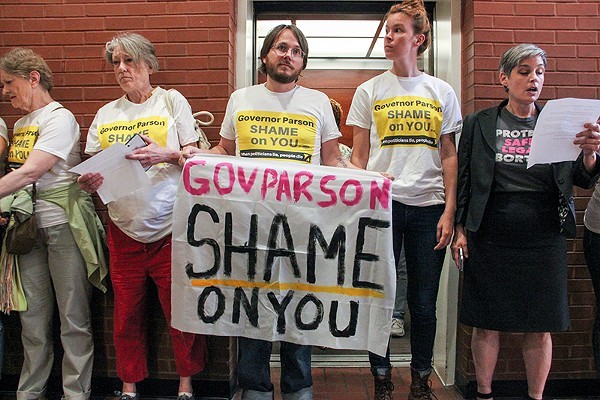 A St. Louis judge ruled today that abortions can continue in Planned Parenthood's clinic in the Central West End — but only until Friday.

The ruling, filed this morning by St. Louis Circuit Court Judge Michael Stelzer, directs Planned Parenthood to take up its case with the state's Administrative Hearing Commission, or the AHC, an agency specifically intended to act as a neutral arbiter in disputes between state agencies and those regulated by them.

According to Stelzer, Planned Parenthood must "exhaust [its] administrative remedies" by first appealing its case to the state bureaucracy designed to investigate disputes over regulations and licenses. Only after the commission considers the case — which, according to a state website, takes place in "a trial-type hearing" — can the case go to the state judicial system.

"The court has no authority to intercede in this matter," Stelzer wrote, himself adding bold to his ruling, "until there has been a final decision by the AHC."

So why is this matter even on the court's agenda? That's because the state effectively delayed the case coming before commission. Last week, after Stelzer forced the Missouri Department of Health and Senior Services to take action one way or another, the agency finally issued a formal denial to Planned Parenthood's renewal application. (Previously, DHSS had attempted to allow the license to simply expire.) Planned Parenthood then sued for an emergency restraining order.

Stelzer granted that restraining order, as well as a subsequent injunction that froze the license's status while the two sides traded legal filings. In the latest order, Stelzer indicated that if the hearing commission rules against Planned Parenthood, the clinic's license will expire this Friday afternoon.

"The terrifying reality is that access is hanging on by a thread with a narrowing timeline," said Dr. Colleen McNicholas, an OB-GYN and abortion provider at the clinic, in a press release following the ruling. "We will continue this fight in the Administrative Hearing Commission, and we won’t stop until every person can access the care they need when and where they need it."

According to the hearing commission's website, the agency "acts as a neutral and independent hearing officer for the state to avoid situations where a state agency acts as investigator, prosecutor, and decision maker." The commission has four commissioners, each evaluating cases independently.

However, while the commission exists to remove the appearance of conflicts of interest, its newest member has a background in pro-life advocacy: Last week, in the midst of the ongoing controversy over the fate of Missouri abortion rights, Governor Mike Parson appointed former Macon County Associate Circuit Judge Philip Prewitt as the fourth commissioner.

In 2015, Prewitt was written up by a state judicial oversight organization for encouraging his Facebook followers to donate to an anti-abortion nonprofit. In an interview with the Associated Press, Prewitt defended his impartiality, saying he doesn't see a conflict between between his duties as commissioner and his anti-abortion advocacy. Still, the story also notes that Prewitt "said he would consider recusing himself if requested by a party in the case."

In a statement to the AP last week, a spokesman for Governor Parson said Prewitt's stance on abortion "was not a factor" in the appointment.