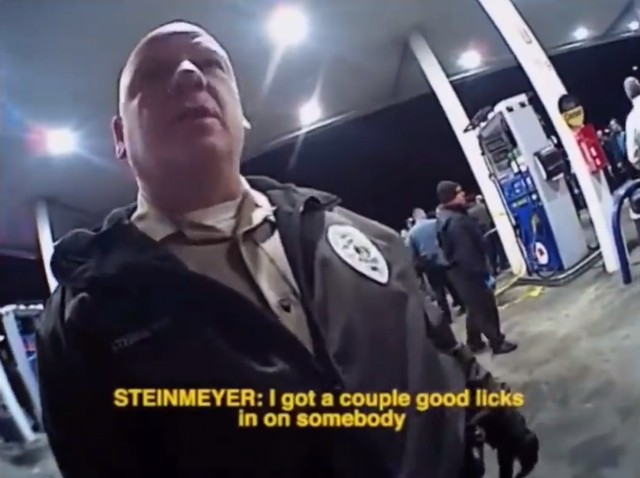 A St. Louis County cop who was caught on video in 2014 bragging about beating protesters has been charged with assault in a ruthless bar fight.

Officer David Steinmeyer, 50, got into a scuffle on June 12 with other patrons at Lehmann's Landing Bar and Grill in Bridgeton, according to court records. When another man tried to break it up, Steinmeyer slammed him into the wall, picked him up and body slammed him on the floor, Bridgeton police say.

The man's skull was fractured in the attack, and he suffered a brain bleed, police say. The confrontation was captured on surveillance video, according to a probable cause statement.

Steinmeyer was charged yesterday with third-degree assault. He posted bond and was released. A spokesman for the St. Louis County Police Department said the officer has been suspended without pay.

In 2014, Steinmeyer was among officers from multiple police departments who clashed with protesters outside of a Mobil gas station in Berkeley. A Berkeley police officer had killed eighteen-year-old Antonio Martin earlier in the day, alleging the teen pointed a gun at him outside the gas station.

Former state Representative Bruce Franks Jr. (D-St. Louis) also went to the scene that day with fellow members of a group called the Peacemakers, hoping to de-escalate tensions between police and protesters. Franks was instead arrested when he bear-hugged a Peacekeeper who was grabbed by police.

Franks later sued officers and forced the release of some damning body-cam footage from the night. The video captures police bragging about macing, kicking and beating protesters following the arrests. That included Steinmeyer.


"I got a couple good licks in on somebody," Steinmeyer says in the video.

As the conversation continues, the veteran officer says, "some guy was fucking kneeling down..." The audio is hard to hear in the middle of the sentence, but captions in the video posted last year by Franks transcribes the rest as "and I fucking kicked him like there was no fucking tomorrow."

After the video was publicly released last year, St. Louis County police said they were conducting an internal investigation of some of their officers' use of force. A spokesman told the RFT today that the investigation had been completed and "discipline was rendered."

The department has declined to say what that discipline entailed. Steinmeyer was initially named in Franks' lawsuit, facing allegations that he climbed onto Franks' back after he was down.

Steinmeyer insisted he was trying to cuff someone else, and it must have been another officer on Franks' back. He was eventually dismissed from the suit.

Correction: This article has been corrected to reflect the fact that St. Louis County police last year did not give a specific number of officers investigated for their actions in the 2014 arrests.