'No Arrests' in St. Louis After Blues Win? Two Arrestees Beg to Differ 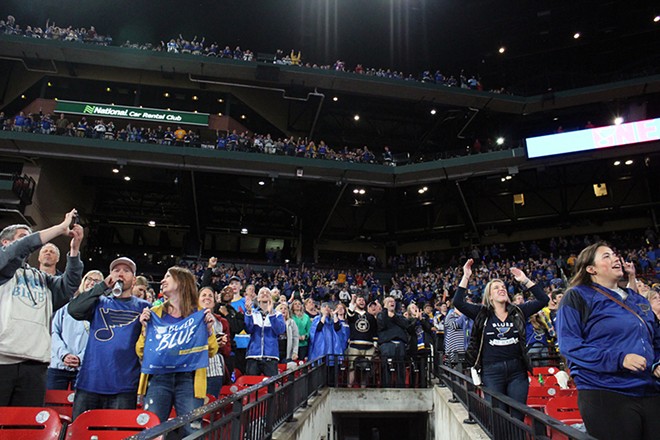 After the St. Louis Blues' Stanley Cup win, the fact that the city didn't (as the Onion had predicted) burn it all down and finally end it became a point of local pride. The police announced that not a single arrest had been necessary in the dizzying aftermath of Game 7. In the words of Fox 2 (KTVI), "Police say there were no arrest reports filed last night for any unruly behavior from Blues fans."

It was a feel-good story. It was also not entirely accurate.

On the same day Fox 2 published the police's statement touting the absence of arrests, Riverfront Times reported on the heroic tale of Blues' fan Justin Poole, who shouted "protect the cup!" as he was arrested near his seat and cited for trespassing at the massive Stanley Cup watch party in Busch Stadium.

And we later learned that, on that same night, police cited a second Blues fan. Andrew Bobbitt had similarly been singled out by a Busch Stadium usher that night and arrested.

Asked about the discrepancy, St. Louis police spokeswoman Evita Caldwell confirmed that both Poole and Bobbitt had been arrested by off-duty officers working as security at Busch Stadium.

"In both incidents," Caldwell wrote, "officers working secondary at Busch Stadium during Game 7 attempted to escort the individuals out of the ballpark due to 'unruly behavior.' However, both individuals refused to leave when asked and were then summonsed and released for trespassing."

When asked if there were other summonses or arrests from the Stanley Cup festivities, Caldwell responded, "This is all I have for June 12," indicating that these two cases represent the total crime activity that night.

That the RFT has somehow identified the only two arrests made amid thousands of drunk and celebrating fans seems ... improbable. But sure, maybe we are that good at our jobs. And maybe St. Louis is just that law-abiding? Either way, the two incidents do show some similarities. 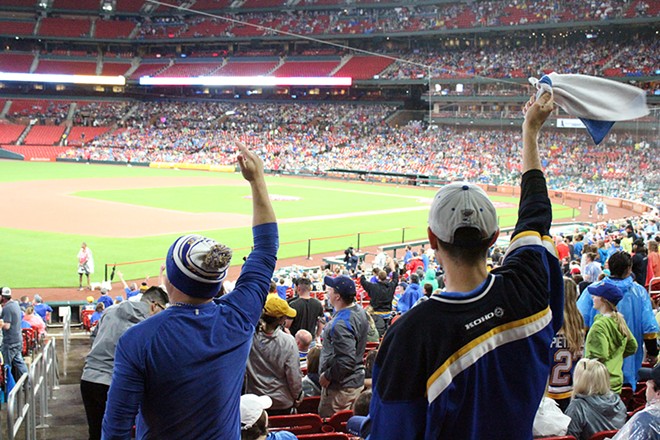 In Poole's case, the fan said his arrest occurred about fifteen minutes after the end of the game. He was celebrating with some gusto when usher told him to leave, which prompted resistance from Poole. He told RFT that the usher directed police to kick him out even though other people remained in the stadium around him.

As for Bobbitt, his citation came during the game's first period. His girlfriend, Emily Schroeder, who attended the game with him, says an usher abruptly targeted the couple for expulsion. She says it was an aggravating, and at times terrifying, experience.

That's because Schroeder has Ehlers-Danlos syndrome, a genetic disorder that, among other things, causes her joints to be easily dislocated by physical contact or movement.

"My disability is invisible, you can't see it just looking at me," says Schroeder.

According to Schroeder, she and her boyfriend were instructed to move to a new section as the rain began to pour down during the beginning of the game. When the weather cleared up, ushers ordered the fans to move back, but Schroeder says the fans were more interested in watching the game than moving quickly. So the usher summoned the cops.

When Schroeder and Bobbitt started to get up, the usher pointed them out to the officers, saying, according to Schroeder, "These two want to talk to the cops." She says she tried to return to her seat, but an officer yelled at the couple and grabbed her arm and said they were being thrown out.

It didn't seem fair to Schroeder. "There was over 300 people who had moved and sat there, we were the only ones who got in trouble," she alleges.

The officers, Schroeder says, didn't want to listen to her explanations about her disability. At one point, she says, a cop punched a cup of soda out of Bobbitt's hand after he'd shouted at an officer trying to grab her.

After Bobbitt's arrest, she asked for a wheelchair to navigate the distance out of the stadium. She says the officers laughed at her.

"A cop was trying to grab my arm and try to walk me, and I was like, 'Please don't touch me, you're going to dislocate my shoulder,'" she says. "If I had a neck-brace or a cane, they would have left me alone. Because they didn't see my disability they thought I was lying."

By the time time Bobbitt was released, the couple had missed the rest of the game. Schroeder says neither she nor Bobbitt, who is eighteen, were drinking or being unruly. She says she doesn't know why the usher or officers were so intent and kicking them out.

"They would not listen to anything," she suggests. "They were more concerned about the Blues game."

For Schroeder, missing most of Game 7 left a sour taste. As for Poole, well, at least he got some viral fame out of it.

For the rest of us, it's unarguably good that St. Louis didn't get put to the torch by sports fans. But don't say there were no arrests. St. Louis may be good, but we're simply not that good.