St. Louis Pride Says Uniformed Cops Are Welcome After All 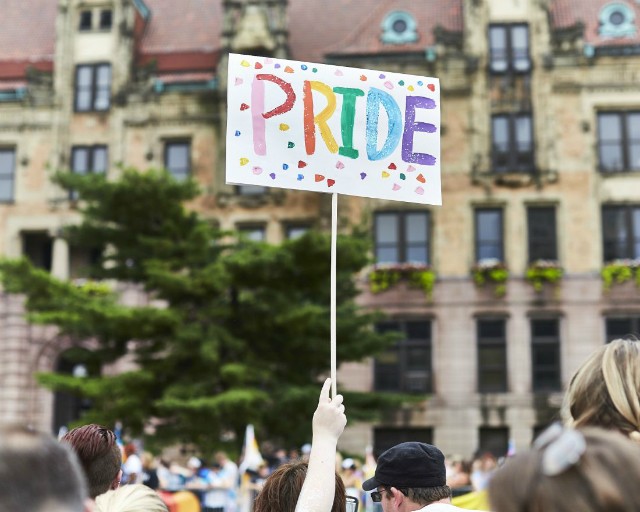 Ten days after announcing that uniformed cops were not welcome to march in the annual Pride Parade, Pride St. Louis has reversed course.

In a joint news conference today with Mayor Lyda Krewson, the board formally announced uniformed officers would be welcome to join the parade this year after all.

"We are dedicated to making sure all LGTBQ community feels safe and respected and are looking forward to building lasting relationships with Mayor Krewson, the city of St. Louis Public Safety and law enforcement," Jordan Braxton, Pride's director of diversity and inclusion, told reporters.

The original decision turned out to be wildly controversial. Krewson and Public Safety Director Jimmie Edwards contacted the board and asked them to reconsider. Edwards says LGBTQ officers had been hurt by the announcement they wouldn't be allowed to march.

"This was an issue, quite frankly, with our officers," Edwards says. "The officers wanted to do this and felt they were being excluded."

Krewson says the city, which approves the permits for the parade, did not pressure Pride's board to make the change, but instead appealed to the idea of an inclusive event.

"We welcome the Pride Parade," she says.

But today's reversal has led to tension with this year's grand marshal. The Metro Trans Umbrella Group is set to lead the June 30 parade with the transgender and non-binary community serving as the marshal.

In a statement, MTUG says its members saw Pride's earlier exclusion of armed, uniformed cops as both an acknowledgement of their concerns about the police and their community's often overlooked presence within the LGBTQ community:


This year, 50 years after the Stonewall riot, we were cautiously optimistic that we would finally be seen by our own community. Earlier this year, the board of Pride St Louis decided to center gender expansive and trans lived experiences by holding us up as grand marshals in honor of 50 years into our movement. When we agreed to take our place as grand marshals, we agreed to make our bodies vulnerable; we put our most marginalized community members at risk once again, especially our siblings of color.

While hesitant, we agreed despite knowing that uniformed, armed police officers who have historically and presently criminalized our bodies would be in the parade. We have strained at best, and violent at worst, relationships with police officers. There has been no indication or effort made to gain an understanding or awareness by the police of who we are and what our community needs from our police officers. We knew that our constituency would be resistant to marching with armed officers however we wanted to work with the Pride Board and Parade team. Once the decision was made to exclude armed, uniformed police officers we finally felt seen, heard, understood and centered. Watching the backlash from white, cisgender gay and lesbian and straight community members, we realize that there is so much more work to be done. More than 50 years into this fight, we are not safe even within our own movement.

So what are we going to do now? We don’t know. For right now, our leadership core is at a loss for words. We are disappointed. We are frightened. And, now quite frankly, we are much more aware of the massive targets on our backs put there by the federal government, our state legislature, and our own community leaders.


Pride organizations across the country have struggled for years with the idea of including or banning uniformed cops from parades. The discussion has become even more prominent this year, the 50th anniversary of the Stonewall riots. The movement-sparking uprising began when New York City cops raided the gay bar and patrons, who were fed up with police abuse, fought back.

The Stonewall Inn was rare for the time in that it had begun allowing in drag queens, and some of those patrons played a key role in the riots.

Many in the trans community, particularly people of color, say they continue to be abused, ridiculed or ignored by police, even as they're targeted for violent crime.

New York City had considered banning uniformed officers in honor of Stonewall, and Sacramento had announced they would not be welcome, only to rescind the ban shortly before the parade.

In St. Louis, MTUG took Pride's decision to celebrate the trans community as the grand marshal and drop uniformed cops as a long-overdue sign of respect.

However, Pride quickly faced a furious backlash, not just from police backers, but from within the metro area's LGBTQ community, particularly older gay men who were active in the civil rights battles after Stonewall and saw the inclusion of police as a sign of progress.

In the last ten days of internet flame wars, critics of decision to block uniformed cops pointed out that a number of LGBTQ officers would be affected. In its original statement, Pride had said those officers and their families could still march, but they would have to leave their uniforms at home.


On the eve of the 50th Anniversary of The Stonewall Riots we admit that we still have an enormous amount of work to do to insure EVERY member of our St. Louis LGBTQIA Community feels respected, honored and included, especially our Transgender members.

As we move forward towards a safer and more inclusive St. Louis, we look forward to working with The Mayor, and The City of St Louis to provide Diversity and Inclusion training, continued conversations, meetings, and working together for a better community.

We concluded after months and weeks of lengthy discussions and debate and also listening to our community, that we will welcome LGBTQIA Police Officers and allies to walk in uniform in the 2019 PrideFest Parade June 30th downtown.

We are dedicated to making sure all of our LGBTQIA community feels safe and respected and are looking forward to building lasting relationships with Mayor Krewson, The City of St. Louis, Public Safety and Law Enforcement.