Missouri's 'Jedi Disposal Act' Would Let You Pull a Darth Vader, Kind Of 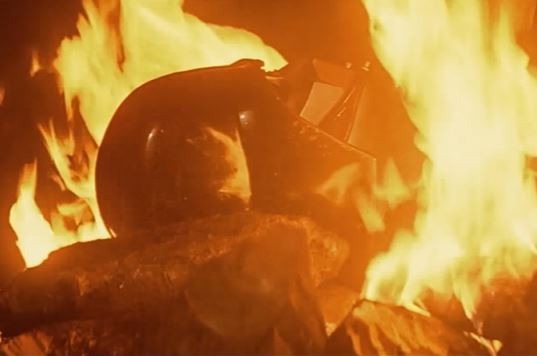 It's a bummer that the Missouri bill nicknamed the "Jedi Disposal Act" does not, as the name suggests, legally recognize the Jedi's right to live on after death as blue ghosts.

Instead, Senate Bill 455, which is awaiting the signature of Missouri Governor Parson, would legalize open-air cremations — that is, burning the deceased on some kind of funeral pyre. As first reported by the Kansas City Star, the nickname stuck because lawmakers couldn't help but think of the Jedi funeral rites displayed after the death of Darth Vader, who is burned on a pyre at the end of Star Wars: Return of the Jedi.

The nickname represents an odd melding of a very specific Star Wars reference with the serious matters of funeral license regulation and a ritual with roots in Native American and Viking cultures.

It would also put Missouri on the funerary map. Presently, the only public open-air cremations performed in America take places in Crestone, Colorado, and are only available to county residents or land owners. A state-wide permitting system appears to be unprecedented, and the bill's sponsor, state Senator Jason Holsman (D-Kansas City), is quoted by the Star suggesting his bill "could end up spurring a cottage industry" for open-air cremation in Missouri.

That industry would serve people who want their funeral done in "in the old way" — a group that includes Holsman, who describes himself as being descended "from a northern Germanic tribe, with Viking ancestry," who burned their dead on boats. (Holsman wants his open-air cremations to stay on land, "just like the Native Americans.")

Unfortunately, the so-called "Jedi Disposal Act" shows Holsman and other lawmakers don't get Star Wars at all. Beyond being, you know, fiction, a "Jedi disposal" by open-air cremation is distinct because, as the film establishes, being a Jedi means getting to participate in the experience of watching your own body burn while you and the other Jedi ghosts hang out and nod knowingly at each other.

(Also, the bill's text does not mention Jedis at all, so it seems like a fair bet that ghostly immortality is off the table.)

As noted by the Star, the Star Wars nickname wasn't the only reference to pop culture cremation attached to the bill's passage. Holsman told the paper that hearings on the bill took place during the final season of Game of Thrones, and the show included a scene showing "the outdoor cremation of all the soldiers who had died." The timing apparently prompted the lawmakers to joke: "If it's good enough for Westeros, it's good enough for Missouri."

Pending the governor's signature, the bill would go into effect in August, though at that point it would be up to the state board of embalmers and funeral directors to come up with rules and regulations for open-air corpse burning. According to the bill, an "outdoor human cremation facility" would be defined as one with the capacity to "reduce remains to bone fragments through heat and evaporation."