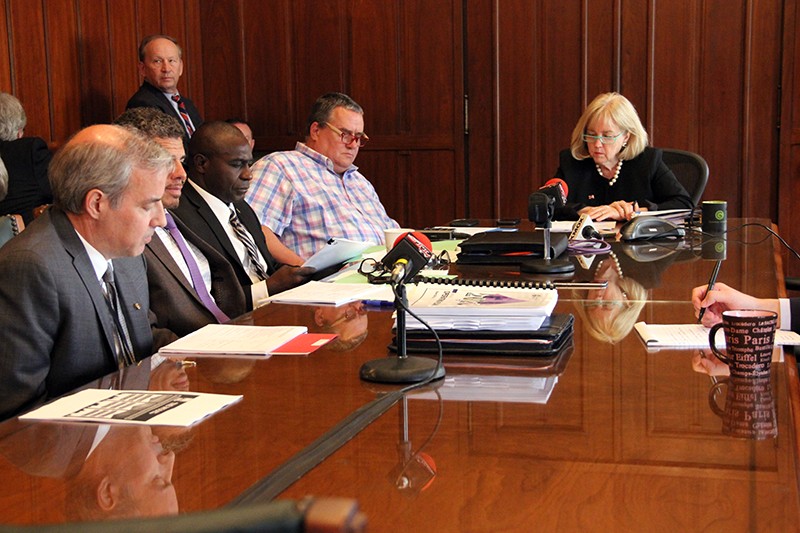 In a Tuesday meeting of St. Louis' most powerful board, Comptroller Darlene Green demonstrated the weight of her office in a striking manner — by not showing up. And in the end, Green proved that she didn't have to show up (or even vote) to get her way.

Behind Green's absence is a rift between her and the other two members of the St. Louis Board of Estimate and Apportionment, or E&A, which must approve all city expenditures. Green spent the April 16 E&A meeting upbraiding those members, Mayor Lyda Krewson and Board of Aldermen President Lewis Reed, over what she called "unacceptable scrutiny" of a bond refinancing package for St. Louis Lambert International Airport. Refinancing $93 million worth of bonds at a lower interest rate is estimated to save the airport around $20 million.

Tuesday's E&A meeting was convened, in part, to approve the bond. But Green refused to attend, and so did her staff and consultants. Her office provided no official explanation. The mayor's office, too, said they were in the dark.

Regardless, the meeting ended with Krewson and Reed grudgingly approving the bond measure. And while Green may have no-showed, her opinion got a big boost two hours before the vote, in the form of a a letter that arrived at City Hall addressed to Krewson.

The two-page letter was from Claudia Aguirre, senior regional leader for airport affairs at Southwest Airlines, and Jennifer Mills Pysher, manager of airport affairs & properties for American Airlines. They urged the city to approve measure as recommended by the comptroller.

"We have been following closely the city of St. Louis' plans to refinance $93 million of series A-1 bonds related to St. Louis Lambert International Airport," the letter began, adding that the process was of "particular interest" Southwest Airlines and American Airlines, "the two largest airlines at the airport."

Lowering the airport's debt payments, the letter stated, would allow those airlines to cut costs, "since any savings obtained would have a direct impact to airlines rates and charges."

After the meeting, Krewson acknowledged that it was the first time she could remember the airlines contacting her directly on a measure under consideration by the Board of E&A.

"It has not happened in my two years here," she said.

The seemingly unprecedented airline communique followed a round of dueling letters between the mayor and comptroller; it started with a May 22 letter to the comptroller's office, in which Krewson complained to Green that the financial details of the bond deal had shifted between what was presented to the Board of E&A and at a later aldermanic committee hearing in May.

The battle of letters picked up again on Monday, when Krewson outlined those complaints in another missive addressed to the entire Board of Aldermen. According to her letter, the comptroller's office had first estimated in April that the interest rate of the bonds would fall between 1.79 percent and 2.8 percent. But in May, the comptroller cited interest rates ranging from 2.7 percent to 3.9 percent. The maturity date had also jumped, from 2034 to 2049.

"These are significant differences," Krewson's letter chided. Still, she added that she would sign Board Bill 13, approving the sale of the bonds, "even though the terms are not nearly as good as previously presented to E&A."

Early that day, Green's office had sent its own letter to the Board of Aldermen. Although the board had voted unanimously in May to pass Board Bill 13, the letter contended that the mayor's insistence on holding an additional hearing on the bill — thus delaying the sale of the bonds — amounted to "blatant and willful negligence" that would cost the city money and cause "hardship and harm" to the airport.

Green concluded the letter by accusing Krewson of stalling the bond sale "to help better the chances for privatization." It's an accusation Green originally lobbed following the contentious E&A meeting in April. At the time, Green claimed that Krewson and Reed were "attempting to make the operations of the airport look less than professional, less than capable, so a privatization in their eyes would make more sense." (Krewson and Reed denied that a desire to lease the airport had factored into their decision to delay the bonds' approval.)

Notably, Green on Monday did not address the "significant differences" Krewson had referenced in her own letter. Prior to Tuesday's E&A hearing, comptroller spokesman Tyson Pruitt would only say, "The comptroller disagrees with the mayor's assessment."

Despite the bickering, Krewson and Reed eventually voted to pass the bond measure, though each remarked that they would have liked to discuss the details further with comptroller's office and its bond consultants. Green's absence made that impossible.

Krewson clearly wasn't happy about it. After the meeting, a reporter asked if she felt misled by the comptroller's office on the bond figures. The mayor replied, "I'm not going to imply that it was intentional, but I know that I’ve not been able to get a response from the comptroller."

Green, meanwhile, has not released any statement on the E&A vote or Krewson's continued complaints.

Instead, Green simply retweeted the letter from Southwest and American Airlines — sending a message, perhaps, that if you try to mess with the comptroller, you'd best be ready to tangle with some heavy hitters.