Dorian Johnson's Lawsuit Against Ferguson Remains on Hold, as Months Pass By 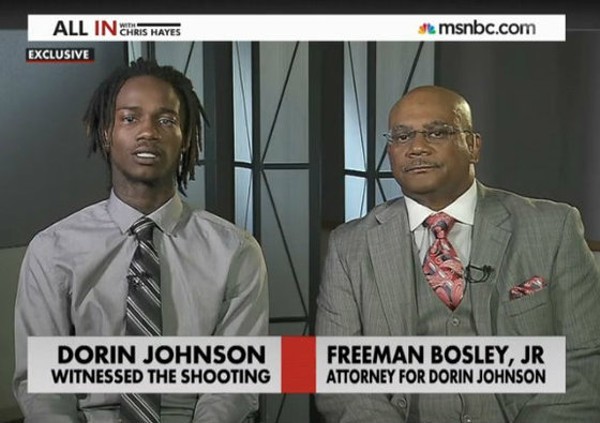 On January 10, 2018, eleven federal judges heard arguments from both the legal team representing Dorian Johnson and the one defending the city of Ferguson and the officer who killed Michael Brown.

But since then, everything has been at a standstill. For seventeen months, Johnson's lawsuit has sat, as members of the Eighth Circuit Court of Appeals apparently continue to deliberate over thorny legal questions arising from the actions of Ferguson officer Darren Wilson on August 9, 2014. Johnson, a key and controversial witness, has sued both Wilson and the city that employed him.

Around noon that August day, Johnson and Brown were walking on Canfield Drive when Wilson stopped them. While Wilson shot Brown to death — sparking protests that would last months — Johnson's lawsuit focuses not on the shooting, but Wilson's decision to stop the two pedestrians in the first place.

First filed in St. Louis County circuit court in 2015, the suit claims that Wilson violated Johnson's right to be free from unreasonable search and seizure. As support, the lawsuit references the U.S. Department of Justice investigation into the Ferguson Police Department, which uncovered rampant discrimination against black suspects and other police abuses.

After being filed more than four years ago, the suit was transferred to federal court, where it has languished at various stages. But this current wait is by far the longest.

Wilson and the other defendants have argued that even if the court believes Johnson's version of events — in which Wilson allegedly used an SUV to block the pair's path while ordering them to "get the fuck out of the street" — it should dismiss the case because what Johnson describes does not amount to an unlawful seizure.

In March 2016, U.S. District Judge Audrey Fleissig called the issue a "close question," and ruled in favor of Johnson, saying the suit could proceed. That led to an appeal, and more than a year later, in July 2017, a three-judge panel from the Eighth Circuit appellate court took up the issue. Two of the three justices sided with Johnson.

In the majority opinion, Appellate Judge Michael Melloy wrote that the court had to look at "the totality of circumstances surrounding the incident," including whether "a reasonable person would have believed he was free to leave."

"It is enough" to support a lawsuit, Melloy wrote, "that Johnson actually stopped when Officer Wilson blocked his path."

But that wasn't the end. The lawyers for Wilson and the other defendants requested a hearing before the full court, not just a three-member panel. Five months later, in January 2018, all eleven members of the Eight Circuit heard the case.

During that hearing, attorney Robert Plunkert, representing Ferguson, argued that Johnson was not actually seized by Wilson. Regardless of the cop's interaction with Brown, the lawyer contended, Johnson could have just walked to the sidewalk and left the situation.

"The only order was to get to the sidewalk,” Plunkert said, as reported by St. Louis Public Radio. "[Johnson] was never told to stop, and the order given wasn’t obeyed."

Since then, of course, well over a year has passed, and the wait for a ruling continues. Reached by phone on Friday, Eighth Circuit clerk Michael Gans told RFT that he had no updates or information on the status of the judges' deliberations, though his answer suggests that the result could feature multiple judges weighing in with dissents.

"Speaking generally, when cases take so long, it's because there are some different viewpoints on the matter," Gans said. "More than one judge may be writing on the case."