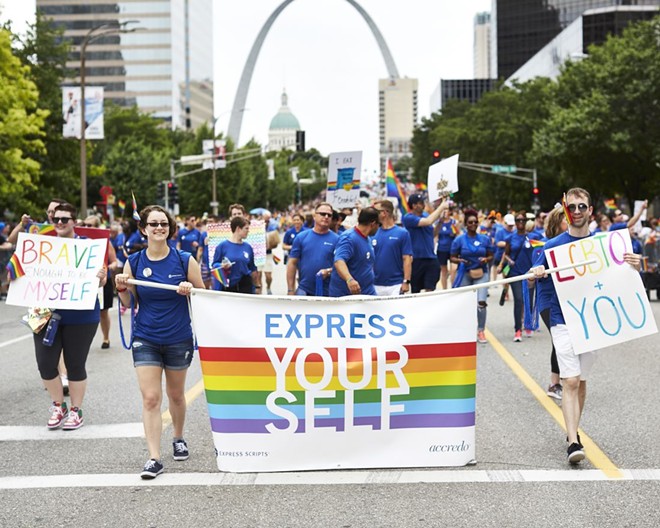 Pride St. Louis already announced plans to move transgender marchers to the front of the parade this year. Now, it's going a step further — kicking out the police.

In a major change in policy, St. Louis Metropolitan Police officers will not be welcome to march in the June 30 procession, Pride revealed today.

The move answers a long-running request from trans community, many of whom cite a painful history of antagonism and indifference from cops.

In a statement, Pride cited the events of the Stonewall Uprising, which has its 50th anniversary this year:

Pride St Louis, Inc. Board of Directors has asked, and they have agreed, that the St Louis Police Department and St. Louis County Police Department will not march in uniform or official entries in this year’s Pride Parade June 30th out of respect to the honoring of Stonewall 50.

Pride St Louis is part of an international organization of Pride organizers (Interpride) which has globally acknowledged the symbolism of this year’s 50th anniversary of the Stonewall riots and not having officers in uniform marching in pride parades.  [InterPride is now disputing this assertion. See the organization's statement below.]

We value our strong and important relationship with all officers and The City of St Louis and St. Louis County.

Pride St Louis welcomes LGBTQIA officers and their families to participate in the parade, however not in uniform.


The landmark uprising began when cops raided the Greenwich Village gay bar, manhandling patrons and arresting more than a dozen.

Six days of riots and protests followed, and pride marches across the nation typically fall on or near the June 28 anniversary. In recent years, trans leaders of the Stonewall riots have begun to be recognized for their revolutionary roles.

"Stonewall was a movement based on police raiding a gay bar and arresting us and brutalizing us," says Sayer Johnson, executive director of the Metro Trans Umbrella Group, adding, "We have a complicated if not fragmented relationship with police."

That has included what many have seen as an antipathy by police tasked with investigating crimes against trans people. In a 2015 survey, the National Center for Transgender Equality found that more than half of respondents reported by mistreated by police, who often misgendered them or assumed they were sex workers. Of those surveyed, just 57 percent said they would feel uncomfortable asking police for help.

In St. Louis, the distrust spiked in August 2017 after Kiwi Herring, a 30-year-old trans woman, was fatally shot by officers. Police originally described Herring as a male suspect and said she slashed a neighbor with a knife and then cut one of the responding officers before she was shot.

Relatives say she and her partner were targeted for bigoted harassment by the neighbor and felt threatened.

"Absolutely that's still fresh in our mind," Johnson says. "We are harassed. We are not tended to properly when we are need in support."

Herring's killing sparked vigils, including one in the Grove that was interrupted when a driver banged into the crowd before speeding away. The driver, Mark Colao, was arrested and later pleaded guilty to careless driving, leaving the scene of an accident and resisting arrest. He was sentenced to a year of unsupervised probation.

Johnson says that excluding police from marching is just part of putting the trans community front and center this year. MTUG and the St. Louis metro transgender and non-binary community were named as the parade's 2019 grand marshal, marking the first time a community, rather than an individual has been so honored.

The distinction comes at a time when hard-won protections for people are under attack at a national level, including bathroom bills and a Trump administration policy limiting the ability of trans soldiers to serve in the military.

Terry Willits, a St. Louis artist and author who will help judge the parade this year, says that trans people are routinely overlooked — or targeted for abuse and violence. Willits, who wrote about the 2019 parade for the RFT, says murders of trans women across the country, along with Herring's death and suicides locally are felt deeply through the community.

The decision of parade organizers regarding police is acknowledgement of their concerns — something that happens too rarely, he says.

"It's a grand gesture in a grand year," Willits says.

Editor's note: We updated this post an hour after publication to include one additional line in Pride's statement.

In addition, we added a statement on June 11 from InterPride, referenced above:

InterPride represents the global pride movement. A movement of over 1,200 prides around the world. We are a membership based organisation and around 300 of those prides are active members.

InterPride is the licsenor of WorldPride and produces an annual world conference. We provide support to Pride organizations regarding local challenges, when possible, including connecting them to mentor organizations. InterPride can not, does not and should not make statements about local issues.

We do make statements regarding the right to assembly for Pride that are operating in restrictive environments - and regarding human rights issues based on sexual orientation, gender identity, gender expression and sex characteristics.

In repetition: InterPride has no stance on police participation in local Pride festivals.