The rain-swollen River Des Peres has taken the Alabama Avenue Bridge. It has taken a wooden shed in someone's backyard. It has taken miles of biking trail. And yet it is still hungry.

Lined with sandbags, the infamously filthy River Des Peres has spent weeks swallowing parts of south St. Louis, gobbling up fences and sidewalks and a stretch of River City Boulevard, which is now entirely river. The River Des Peres Greenway, which in drier times conveys cyclists to the Mississippi, is now an impassable swamp stretching into the distance. Instead of sidewalk, hikers must walk alongside the floodwall and rows of sandbags stacked to oppose the rising waters.

Although the U.S. Army Corps of Engineers colonel announced Monday that "we do not foresee any problems in the urban levee system," the National Weather Services expects the Mississippi River to crest this Friday at 45.3 feet. But the Des Peres has already spent weeks reclaiming territory from the city that tamed it into a concrete-lined creek for human waste. 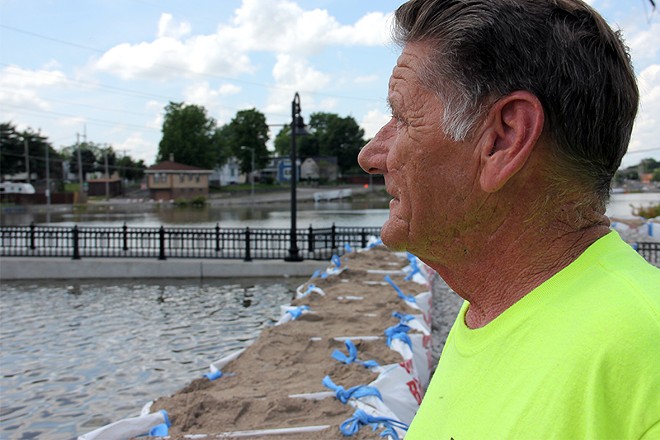 The 9.3 mile river runs from south county into the city, serving as a sanitary sewer and storm drain for more than 100 years. And in its surge, it's swept up trash along the way. Near the banks, the dully colored water spreads archipelagos of Styrofoam cups, plastic liquor bottles and long lost basketballs. Small birds hop between the detritus.

The sight has caused some citizens to call for cleanup efforts. Apparently, years of improvements to the Des Peres have allowed some St. Louisans to forget that it spent a century as an open sewer and repository for industrial waste. For most of its life as an urban river, it stank terribly and flooded frequently.

In a Monday Facebook post, the city's Department of Health found it necessary to remind "residents and volunteer cleanup groups" that the Des Peres floodwater is not safe for human contact, citing "hazardous waste" and the danger of "infections, skin rash, gastrointestinal illness, and tetanus."

Most residents are content with sightseeing, though anxiety is mixed in with the spectacle.

Mike Byrne, who says he's lived in south city for 60 years, now resides in a house just a few blocks from the flood wall built at the Alabama Avenue bridge.
He gestures around the intersection. Cars drive through the water that bubbles out of a manhole cover. When the levee at the nearest pump station downriver broke in 1993, he says, "all this was water."

At the time, he was working at the nearby liquor store. Then came the epic flood of 1993, when the Mississippi crested at 49 feet, and the River Des Peres surged into surrounding neighborhoods, destroying rows of homes and putting eight feet of water into the liquor store.

Even after two decades, the '93 flood remains St. Louis' benchmark for weather disasters. Comparing that flood to this one, Byrn judges that the present deluge still doesn't match it.

But then he walks to the gravel top of the flood wall. Beyond it, water covers the entire surface of the Alabama Avenue bridge — it had been built in 1994 to replace a 65-year-old bridge that was completely submerged in the previous year's floodwaters. Byrn remarks that the new bridge had actually been designed to sit several feet higher than its flood-prone predecessor.

Now, the new and improved Alabama Avenue is once again under water.

Byrn takes some photos with his phone. "Well, you know what," he says, reconsidering his earlier judgement. "I would say we are at probably close to '93. All this water right here? I'm going to say yeah, we're close to it." 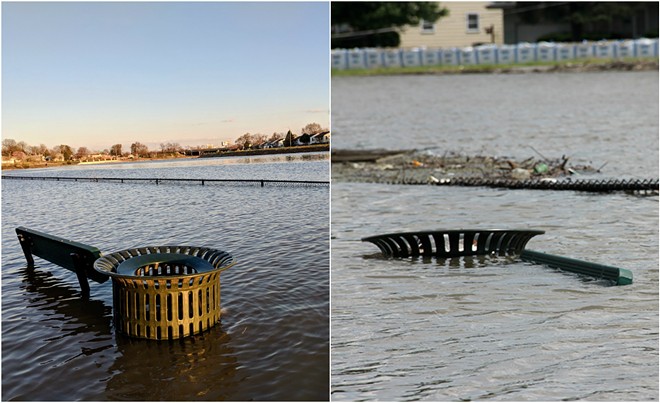