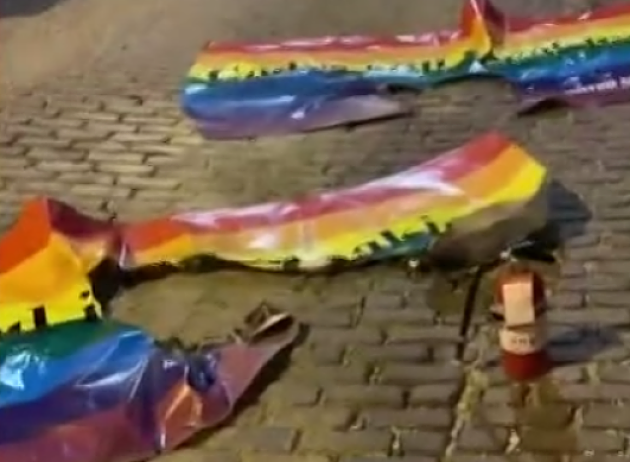 We're only a few days into Pride Month, the June-long celebration of gay rights and achievements commemorating the Stonewall Riots of 1969, and a pair of apparent hate crimes in St. Louis have the city's LGBTQ community on edge.

Two separate incidents have occurred in recent weeks that appear to have been motivated by hatred of gay people. The most recent took place in the Grove, where a pair of rainbow flags were set ablaze behind Rehab Bar & Grill Monday night.

KSDK reports that the bar's owner, Kyle Hanten, came upon the flaming flags around midnight after seeing black smoke billowing in the alley. He was able to put them out with a fire extinguisher, but their mere presence behind a gay bar in a famously gay-friendly part of town is disturbing.

“To some people, they're like, 'Oh it's just a banner on fire,'" Hanten tells KSDK. "It's a message and the intention of what they're trying to do — intimidate us. And ultimately fighting hate with hate doesn't work."

Both of the flags were marked with slogans from United Church of Christ. Police believe one of them was stolen from the church's Kirkwood location, KSDK reports.

That incident comes on the heels of an alarming attempted break-in in Soulard a couple weeks back. KMOV reports that just before midnight on May 24, a Soulard resident who asked not to be identified awoke to the sound of yelling and banging just outside his house. He didn't recognize the man who was responsible for the ruckus — but he does believe he knows what set him off.

"He saw the deck of our house," the homeowner tells KMOV, "which is painted in rainbow flag colors because we support our daughter."

Footage from a surveillance camera outside the home shows the intruder punching a spindle on the deck while shouting homophobic slurs and repeatedly attempting to kick in a door to get inside. When he was unsuccessful in those efforts, the man kicked in the neighbor's door (the neighbor was not home at the time).

According to a summary of the incident from the St. Louis Metropolitan Police Department, the man had been drinking at the nearby Trueman's Sports Bar prior to the incident and became "highly intoxicated." He then headed a few blocks east, crossing from Benton Park into Soulard.

After banging on the door at 13th Street and Sidney, he tried to return to Trueman's. After being involved in a physical altercation outside of the bar, "he fell to the ground where he sustained injuries to his face." From there he was taken to a hospital.

Police identify the suspect only as a 26-year-old male. They say he kicked a car door on his way back to the bar, which prompted the fight.

Police say investigations into both incidents are ongoing. But that's cold comfort for a community that fears they're in the crosshairs.

"We like to think that we're safe here and comfortable, everyone is welcome. It's not as safe as everyone thinks it is," Hanten says. "We're kind of naive in believing this stuff happens other places and it will never happen here."