Earl Webster Cox, a disgraced U.S. airman with a sickening past, was charged today with first-degree murder, kidnapping and sodomy in the 1993 killing of Angie Housman — and he may have had an accomplice.

The 61-year-old convicted child molester abducted the little girl, torturing and raping her before he bound her to a tree and left her to die alone, St. Charles County Prosecuting Attorney Timothy Lohmar told reporters today.

Lohmar added that investigators are hopeful that identifying Cox may turn up new information and possibly an additional suspect.

"We have reason to believe that Earl W. Cox was not the only suspect involved in this case," the prosecuting attorney said at a news conference.

It took more than 25 years to link Cox to the case. In a probable cause statement, St. Charles Lieutenant Ed Copeland wrote that DNA taken from the lining of Housman's Barbie logo underpants matched Cox.

Cox is currently being held in another case in a federal prison in North Carolina.

Housman's naked body was found on November 27, 1993 by a hunter in the August A. Busch wildlife area in St. Charles County. Her head was wrapped, except for her nose, in duct tape. Her hands were handcuffed behind her back and duct tape on her wrists covered deep lacerations. She had another cut on her thigh. She eventually died of hypothermia.

Investigators discovered a portion of her underwear in her mouth and additional pieces in a Dollar General Store bag nearby, Lohmar says. The underwear proved key in the recent DNA analysis.

Lohmar says advancements in the science since the investigation began more than a quarter-century ago made the DNA match possible. Even so, there was an element of luck, he added.

"They were looking for a needle in a haystack without a magnifying glass, but they still found the needle," Lohmar says.

The horror of Housman's killing brought a new hyper vigilance to St. Louis. Terrified parents across the metro area kept a close watch on a generation of children — now in their 30s and 40s — as weeks, months and then years passed without an arrest.

The terror was that of an unknown monster, a secret predator among them. In truth, those fears may have been half right. 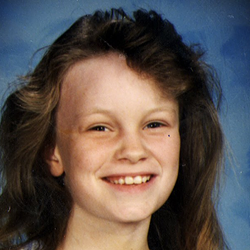 Cox was a predator with a monstrous past, but he was not unknown. The abduction of Housman occurred just eleven months after the admitted pedophile had been released from the military prison at Fort Leavenworth in Kansas.

He had been court martialed, dishonorably discharged from the Air Force and locked up in the early 1980s for sexually abusing four little girls that he was babysitting while stationed overseas in Germany, according to federal court records. He was released after five years of an eight-year sentence, but he was soon in trouble again.

Authorities accused him in 1989 of sexually abusing a pair of young girls that he had taken to the movies and then a park. He was also questioned about touching another child in 1991. The charges were later dismissed, but Cox was found to have violated his parole as a result of the incidents and was sent back to Leavenworth for another year. He was released in December 1992 and returned to the St. Louis area. Public records list his address back then as Wismer Road in St. Ann.

The address is where Cox's parents lived, and it's about a quarter mile from the bus stop where Housman was last seen. Lohmar says investigators believe Cox was actually living in Ferguson, but he notes that Cox's sister lived three houses away from Buder Elementary, where Housman attended school.

Housman's murder has never been forgotten. In recent years, a collection of mothers calling themselves Angie's Angels have pushed to keep the investigation alive, gathering whatever evidence they could and tracking their progress on Facebook.

Lohmar says law enforcement, including some of the original detectives on the case, have convened three task forces over the years and had never given up. He says it is a "hunch" based on some details of the case that make investigators suspect Cox may have had help. He declined to go into specifics but said the fact that Housman was held for a period of time and moved between locations suggests the possibility of an accomplice.

Starting in 1997, Cox began interacting with the group called the Shadowz Brotherhood, court records and news accounts say. The network operated chat rooms and web pages where members shared illicit photographs and videos of kids. It ran on a reward system — the more images users shared, the more parts of the site they could access.

Cox, who had been a computer operator in the Air Force, became an administrator for the Brotherhood, running the "Panty Raiders/Lolita Lovers" group. In 2003, he was caught in an FBI sting after exchanging emails with an agent posing as a fourteen-year-old named "Brenda."

"Using the screen name 'Youngstuff,' Cox told 'Brenda' that he wanted to fuck her and spank her," court records say. "Cox sent 'Brenda' emails encouraging her to leave her home in Virginia and come to Colorado to be his 'sex slave.'"
He sent her $60 for a bus ticket and told her wear a short skirt, red tube top and no bra or panties.

FBI agents arrested him at a restaurant as he waited for the girl to arrive. They then seized his computer, which unearthed the Brotherhood. About 60 people in eleven countries were arrested, according to a 2003 Colorado Springs Gazette story.

Cox was sentenced to ten years in prison for attempting to entice a minor. He was due to be released in 2011, but federal authorities certified him as a "sexually dangerous person" two months before he was to get out of prison. That designation has allowed the government to keep Cox locked up indefinitely.

Psychologist who reviewed his history found that he was mentally ill and was a serious threat to harm more girls in the future.