A 2-Year-Old Peed in a Park; Ferguson Police Arrested Both Parents. Now They're Suing

On June 3, 2014, Walter and Ritania Rice were finishing up an outing at Ferguson's Forestwood Park when their two-year-old announced he had to pee. Seeing no restrooms nearby, Walter Rice helped the boy to an area hidden  between the family van and a bush, and let him urinate.

The boy's four-year-old brother took advantage of the moment, and pulled down his pants to urinate too. Walter Rice quickly pulled his son's pants back up.

He wasn't fast enough for Ferguson Police Officer Eddie Boyd III. Spotting the children, the officer yelled at Walter Rice and told him it was against the law for a child to urinate in public. When Rice explained that he hadn't realized that law applied to children, Boyd grew infuriated. He ended up arresting Walter Rice and having him charged with two counts of parental neglect.

And things only got worse from there.

When Ritania Rice followed Boyd's police car in the couple's van, directing their ten-year-old to film Boyd as he took Walter Rice away, Boyd turned on the children's mother, too — arresting her for a series of traffic violations and yelling that he'd have to call the Department of Social Services to remove the children.

Their grandmother came to pick them up, sparing that nightmare. But Ritania Rice, who'd only driven briefly outside the parking lot while following the police cruiser, was charged with driving on the wrong side of the road, following a vehicle too closely, failing to signal, financial responsibility required, intersection obstructing and interference with an officer. Both parents were hauled off to jail and not released for nine hours. And when Ritania Rice finally got her purse back, she discovered that the Ferguson Police Department "had deleted the video from her unlocked cell phone."

All of those details are from the federal lawsuit the Rices filed against the police department, and Boyd, on Monday. But you don't have to take the suit's word for it. The Rices' story is also commemorated in the U.S. Department of Justice report into policing in Ferguson, cited as an example of Ferguson's penchant for violating First Amendment rights.

Only now, however, are the Rices taking legal action.

Attorney Javad Khazaeli, who is representing the Rices, says the couple was initially too busy fighting the claims in court, and then too shaken up, to even think about a lawsuit. "They were trying to put this behind them," he says.

When they were contacted recently related to a different matter involving Boyd, they began to think about the incident all over again. They ended up reaching out to Khazaeli and his partner, Jim Wyrsch, at Khazaeli Wyrsch LLC. Their suit against the city of Ferguson and Officer Boyd alleges violation of their due process and first amendment rights, as well as negligent infliction of emotional distress.

For years after the incident, the suit says, the couple's younger children nervously reached for their parents upon seeing law enforcement or mall security. And even today, the suit says, "Mr. Rice tears up every time he thinks about his children weeping in the back of that van."

Although the couple didn't know it when their case went to trial, Boyd has a long track record. As a St. Louis Metropolitan Police officer, he was accused of physical abuse in four separate incidents, the suit alleges. In one, the department found he pistol-whipped a twelve-year-old girl and falsified a police report. In another, separate incident, he pistol-whipped a sixteen-year-old.

He later left the department and went to St. Ann, only landing in Ferguson after that. He's mentioned in three incidents in the DOJ report on Ferguson — and "has been accused of at least three other incidents that closely parallel" what he did to the Rices, the lawsuit alleges. Among them: Navy contractor Fred Watson, who filed his own federal lawsuit over Boyd's shocking behavior during a confrontation at, yes, Forestwood Park.

To Khazaeli, Boyd brings to mind the South Park episode where Cartman pretends to be a cop and goes around screaming at people for failing to respect his "authori-tay."

"That episode has been going through my head over and over again," he says. "This is an officer who violates people's constitutional rights because he demands they genuflect to him and respect his authority."

Even with numerous complaints against him, Boyd remains with the Ferguson Police Department. He's actually suing the department, alleging that racial bias has stopped him from being promoted. (Boyd is black.)

But as Khazaeli notes, Boyd wasn't solely responsible for the Rices' torment. "This case made from a police office to a supervisor to a prosecuting attorney to a judge," he says, and no one stopped it from proceeding all the way to two guilty verdicts.

It's almost unbelievable — unless, of course, you're familiar with the pattern and practice of policing in some north county suburbs. Says Khazaeli, "There's not a person who can read the facts of this case and not have eyes jump out of their head — unless they are either corrupt or holding up a system meant to oppress people." 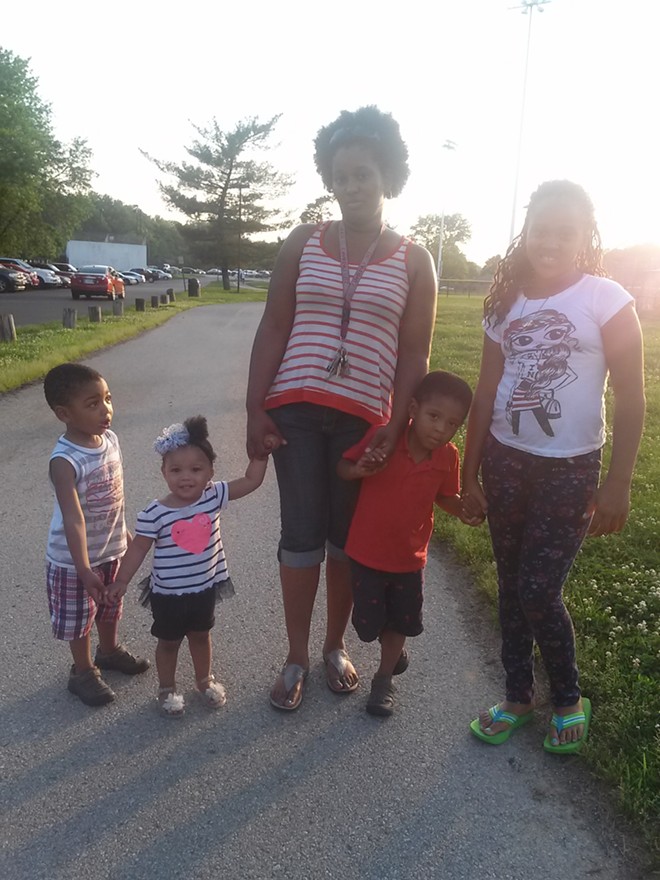 Editor's note: A previous version of this story contained inaccurate information about the two counts on which Judge Brockmeyer convicted Ritania Rice. They were intersection obstruction and interference with an officer, not driving on the wrong side of the road and failing to signal. We regret the error.