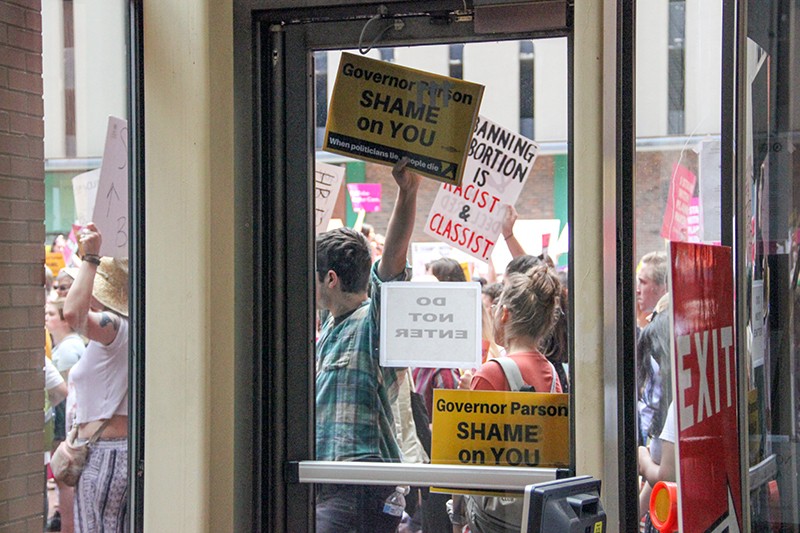 After winning a last-minute reprieve on Friday, Missouri's last remaining abortion provider remains open as Planned Parenthood seeks more time to assemble its case against the state. Abortion rights advocates contend that Missouri is "weaponizing" what should be an impartial regulatory process to renew the abortion license at the Planned Parenthood clinic in the Central West End.

The license had been set to expire last Friday. The Missouri Department of Health and Senior Services, or DHSS, has thus far refused to renew it, citing unspecified "deficiencies." The department is also seeking to force several physicians and doctors-in-training to appear for interviews, though the subject of those interviews is not known.

Last week, St. Louis Circuit Judge Michael Stelzer granted Planned Parenthood's request for a temporary restraining order, thus freezing the issue before the license expired. That reprieve appears likely to continue for now. Jamie Boyer, an attorney for Planned Parenthood, asked the judge at a hearing this morning to provide time for the organization's attorneys to assemble evidence and marshal their witnesses.

The judge today said that, for now, he is only interested in resolving several motions, including those relating to subpoenas targeting doctors who have refused to comply with DHSS requests for interviews.

Lawyers representing four of those doctors appeared in court today. The doctors, who were not named, are not employees of Planned Parenthood, but rather trainees, or "fellows." While DHSS, represented by Missouri Solicitor General John Sauer, argued that those personnel are key to the state's "grave concerns about the quality of medical care" in the clinic, attorney Robert Haar argued that his clients should not be forced to testify in court.

"They have no relevant information in this lawsuit," Haar told the judge, arguing for a motion to quash the state's subpoenas.

There is a key distinction here: In the state's procedure for license renewal, DHSS's request to interview the four doctors was just that, a request. Planned Parenthood previously argued that the organization can't compel the doctors to comply, since those doctors could, hypothetically, face criminal charges or referrals to a state medical board. Those doctors have their own interests to protect, and are acting under advisement of their own legal counsel.

Things are different now that the matter has landed in court. Rejecting a subpoena lands you jail until you comply. Haar argued that the state's subpoenas represent "troubling" attempts "to use the powers of this court to compel these interviews."

In response, Sauer argued that the doctors possess "first-hand knowledge" of what happened during the procedures that underlie the department's "grave concerns." (Again, we don't know exactly what those concerns are.)

"What these doctors know is highly relevant to this case," Sauer said.

There's also a question of the degree to which these doctors were involved in the clinic's operation. Attorney Russell Makepeace, representing two other doctors training at the clinic, told Stelzer that his clients did not have login access to medical records, and that they had spent only twelve days training at Planned Parenthood over a four-year period.

In Makepeace's remarks, he also revealed that Planned Parenthood has cancelled its training programs at the St. Louis clinic.

After the hearing, M'Evie Mead, director of policy and organizing at Planned Parenthood Advocates in Missouri, confirmed that the training had been halted as part of the clinic's attempts to comply with the state's licensing requirements.

"Planned Parenthood bent over backwards to meet some frankly medically unnecessary and inappropriate requests from the state," Mead said. "[Planned Parenthood] said 'OK, you don't want the trainees to be participate in providing high quality healthcare.'' So they'll end that practice for now. They'll fight that another day. But to renew this license, they'll stop it."

As for the next step, Stelzer said during the hearing that he plans to issue judgments on the issue of the doctor subpoenas by the end of the day. We'll update this story when we know more about the next hearing. But for now, the Planned Parenthood clinic in the Central West End remains open for business.

In a ruling issued this afternoon, Judge Stelzer quashed the four subpoenas targeting physicians who had worked at Planned Parenthood. The judge concluded that compelling testimony from the doctors — identified only as a "Staff A," "Staff H," "Staff F" and "Staff G" — would "present an undue burden." The judge also deemed their testimony "irrelevant to the issues now before the court."

Stelzer also granted Planned Parenthood's request for a continuance, but only for one day. The next hearing, in which Planned Parenthood's attorneys will present their full arguments regarding the state's refusal to renew the clinic's abortion license, is now scheduled for 9 a.m. Wednesday.