In a database featuring hundreds of St. Louis police Facebook posts, the city's finest come off as boors and bigots with a particular antipathy toward Muslims and "thugs." The posts have now sparked an internal investigation.

Published Saturday by the Philadelphia-based Plain View Project, the database purports to feature more than 400 Facebook posts from 43 current and former officers. While that's a small percentage of the city's 1,300 sworn officers and more than 400 civilian employees, that's more than a few bad apples. The posts also provide a window to police culture on Facebook, as the majority of the posts appear to be reshares of memes from larger pro-police groups.

In an email this morning, St. Louis Metropolitan Police Department spokeswoman Evita Caldwell says that information contained in the searchable database "has been forwarded to our Internal Affairs Division, which is being reviewed for any violations of our policies." 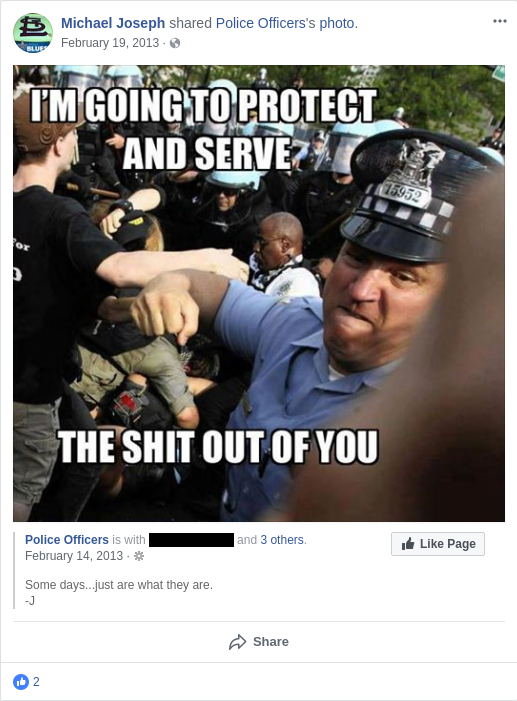 To create the database, the group used department rosters to identify the Facebook profiles belonging to officers. According to the press release, "researchers reviewed each captured post and flagged those posts that, in the Project’s belief, could undermine public trust in policing."

It is worth noting that many of the most flagrantly bigoted posts, including shares of memes defending the Confederacy and white pride, come from a pseudonymous account, "Ron Nighthawk." But the database identifies its owner as officer Ronald E. Hasty, and local journalist Charles Jaco noted other corroborating details in his post about the database on Saturday. The account was responsible for 31 posts flagged for the database. 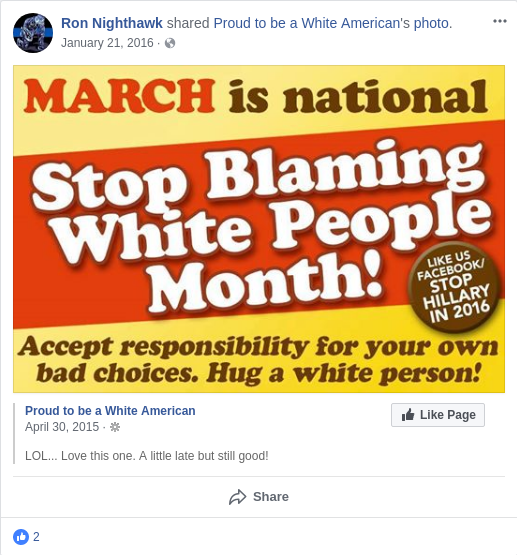 In another post, Nighthawk/Hasty cheered on the "kettling" of protesters in 2017, sharing a post from a redacted author who wrote, "I personally loved seeing this and I don't care if people were roughed up. ... U play u pay."

It's an ironic example, as that particular police action would eventually implode in controversy when it was revealed that officers had giddily texted each other about "beating the hell out of these shitheads" — one of those shitheads, it turned out, being an undercover St. Louis police officer.

Other officers posted without shame under their real names. Officer Thomas Mabrey, for instance, accounts for 74 Facebook posts in the database, charting a broad portfolio of memes, the majority of which mock Muslims — like Barack Obama, of course — and frame Islam as the root of all terrorism.

You can look through the full database of Facebook posts here. The Plain View Project says it took eighteen months to create the database.

"Much as with video recordings of officers' misconduct in their encounters with Black Americans, this graphic evidence of officers' hateful racial beliefs confirms what communities of color have been saying for many years,” Geoffrey Raymond, professor of sociology at the University of California, Santa Barbara, said in the organization's new release. “This evidence, in turn, points to yet another way in which fundamental changes will be required to restore legitimacy to the departments and agencies in which these officers work."