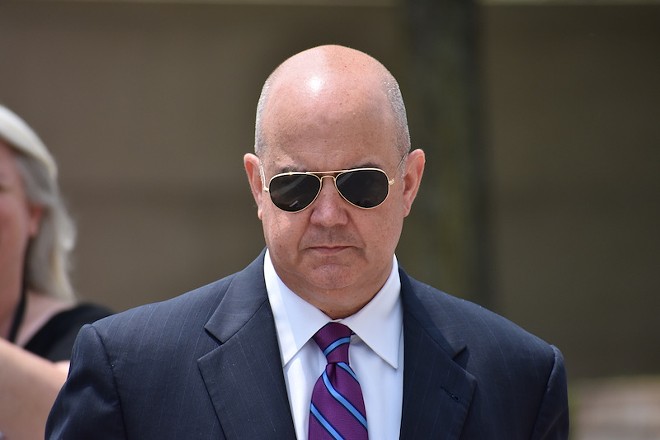 Miller, who had served as Stenger's chief of staff, pleaded guilty this morning to one count of aiding and abetting honest services wire fraud and bribery. The 54-year-old Richmond Heights resident admitted in federal court that he helped his boss steer taxpayer-funded contracts to a lobbying firm that was a major political donor to the former county executive's campaign.

It was Miller's job to convey Stenger's wishes to St. Louis Economic Development Partnership CEO Sheila Sweeney, who had influence over the contract.

Assistant U.S. Attorney Hal Goldsmith told U.S. District Judge Rodney Sippel that prosecutors had hours of secretly recorded meetings and conversations in the case, along with thousands of text messages. Excerpts of the conversations were included in Stenger's indictment. He pleaded guilty to three felonies on May 3.

The recordings in the case include Miller talking with Stenger's policy director Jeff Wagener about the best way to persuade Sweeney to do what they wanted in awarding the lobbying contract.

Sweeney, who pleaded guilty earlier this month to misprision of a felony, had been involved in other schemes to reward political donor John Rallo with contracts. (Rallo was also indicted and has pleaded not guilty.) But she was apparently getting cold feet when it came to renewing the lobbying firm's contract. There was another bidder, and Stenger and his staffers were worried she might give them a fair shot.

“Steve's like, this can't be fucked up, it's going to happen,” Miller told Wagener in a taped conversation. “So, in other words, some message has to be delivered to Sheila. We need to talk to Sheila. I'll do it, but wanted to touch base with you.”

Wagener replied: “Because Steve wants [the lobbying firm] to get it?

Miller told him: “Steve's like, you don't fucking understand, this is how it works. I'm like, yeah, I get it. It's not a problem, we'll take care of it… Steve wants it, let's get it done.”

On November 20, 2018, Miller and Wagener met with Sweeney, along with another top official in Stenger's administration, Thomas Curran, at a Starbucks in Clayton. The three men delivered the message to Sweeney, according to federal prosecutors. And despite whatever misgivings Sweeney might have had, the $149,000 contract for 2019 was awarded to the lobbying firm.

Wagener and Curran have not been charged in the case. The partnership recently canceled the lobbying firm's contract, Goldsmith said.

Once one of the most powerful people in county government, Miller spoke little this morning in court as he appeared alongside his attorney, Larry Hale. Asked about medications he might be taking, he told U.S. District Judge Rodney Sippel that he began taking Lexapro, a medication for depression, two weeks ago.

Goldsmith described the prosecutors' case, and Sippel confirmed again that Miller understood what was happening.

“Mr. Miller, how do you plead guilty to the information,” Sippel asked.

He is scheduled for sentencing at 11 a.m. on September 6.