Defending the Last Abortion Clinic in Missouri, Planned Parenthood Will Try Anything 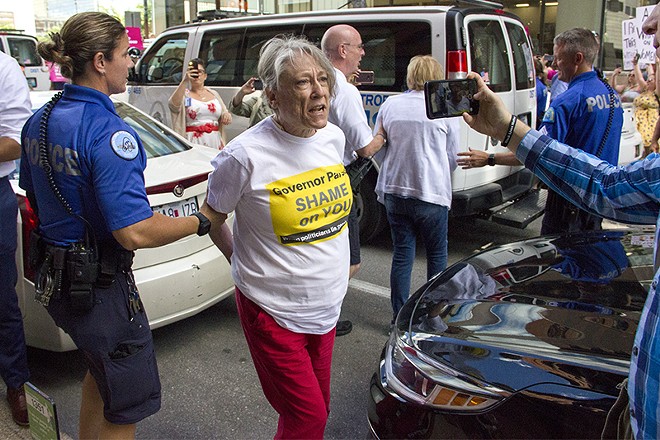 Update 2 p.m.: A St. Louis judge has ruled in favor of Planned Parenthood, granting a restraining order that will allow the clinic to continue to provide abortions. However, the final disposition of the case now hinges on a hearing scheduled for this coming Tuesday. Read more about that order here.

Yesterday, Planned Parenthood decided it had almost nothing to left to lose in Missouri — and it tried a daring maneuver.

While lawyers for the organization appeared before a judge to argue that Missouri has weaponized its licensing process to shut down the state's last abortion clinic, and urging him to intervene, a different sort of action was underway. A few blocks from the courthouse, a group of protesters, including Planned Parenthood board members and a city official, entered the lobby of the Wainwright State Office Building downtown and refused to leave it.

It was a bold move, but also a sign of just how bad things have gotten for an organization that's historically chosen to fight its battles in the courtroom, where the right to an abortion enjoys more than 40 years of legal precedent, all the way back to the 1973 Supreme Court decision in Roe vs. Wade.

For Missouri women, though, those legal rights are no longer so solid. Last week, Missouri Governor Mike Parson signed an eight-week abortion ban without exception for rape or incest, stating that he wanted Missouri to be the "the most pro-life state in the country." Days later, the governor insisted that state officials' unwillingness to renew the license for Planned Parenthood's clinic in the Central West End "is not about the pro life issue at all."

That license is set to expire at close of business today. Lawyers for the state have argued that legal action is premature, but Planned Parenthood has begged a judge to step in and grant a reprieve. If he doesn't, Missouri women would become the first American citizens since Roe vs Wade to live in a state without legal abortion care.

The protesters who shut down the Wainwright building weren't willing to wait around. The action's organizers allowed a Riverfront Times reporter to embed with the group during its preparations for a bold action.

The situation in Missouri is "a crisis point," one protester explained. "We’ve done everything else that can be done. This is what we’re doing now." 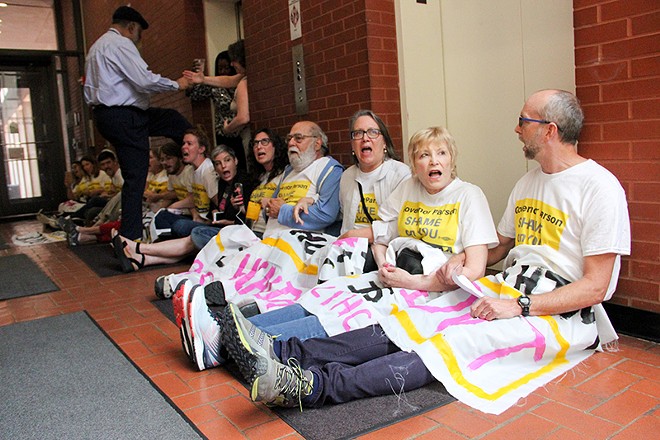 In court Thursday morning, St. Louis Circuit Judge Michael Stelzer made no grand gestures indicating his position, instead directing pointed questions at both the attorneys representing Planned Parenthood and the state's Department of Health and Senior Services, or DHSS.

"How do I step in at this point," he asked the clinic's lawyer, Jamie Boyer, "when no decision has been made?"

Indeed, the issue of the clinic's license is tied up in an administrative tangle. DHSS insists the license holdup is solely the result of the clinic's refusal to make certain physicians available for an investigation into undisclosed "deficiencies."

Technically, though, the clinic has not lost its license yet.

"My ability to interfere before a decision has been made," Stelzer added, "is very limited."

Arguing for Planned Parenthood, Boyer maintained that the court had an obligation to interfere. She argued that DHSS officials are twisting the procedure for license renewal, and that the situation required a temporary restraining order — which would fully settle the issue in court. It would also allow the clinic to continue offering abortions while the matter is being adjudicated.

Central to Planned Parenthood's complaint is the state's demand for interviews with seven physicians. Planned Parenthood argues that five of those individuals are not actually employees of the clinic and had refused the interview request on advice of their own attorneys.

In court, Boyer argued that the legislature "never intended" to allow the state to deny a license on the grounds that a clinic could not produce individuals for interviews. In response, the state's attorney, John Sauer, argued that DHSS was simply responding to "troubling" details uncovered in medical records.

It is Planned Parenthood that's out of line, Sauer said. Even though some of the individuals aren't technically employees, three are physicians that continue to perform medical service at the clinic. Planned Parenthood, he said, has an obligation "to take affirmative steps to induce their cooperation" — steps that include threatening their positions if they don't cooperate.

"In any other situation," Sauer added, "those doctors would be terminated."

Sitting in the courtroom was M’Evie Mead, director of Planned Parenthood Advocates of Missouri, which functions as the organization's state-level political arm. During a post-hearing press conference on the courthouse steps, Mead blasted the state's "goalpost-moving behavior."

She didn't hang around. From the courthouse steps, Mead headed to the Wainwright Building. Two hours later, she was among those arrested. 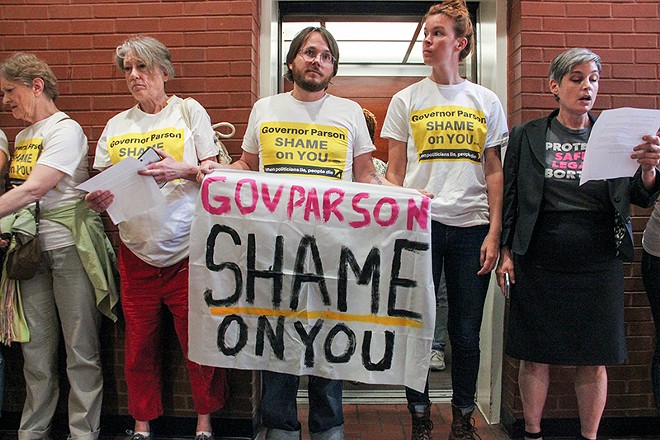 At the Wainwright Building, St. Louis Alderwoman Megan Green led a group of undercover protesters through the security checkpoint. She had reserved the conference room in the lobby, one with large glass windows facing the interior's tiled courtyard.

But her reservation, ostensibly for a "community discussion about health," was a pretense for a staging ground. Around twenty people filed into the conference room, some wearing t-shirts turned inside out to hide their slogans, "Governor Parson SHAME ON YOU."

Green acknowledged that she used her position to assist the protesters get into the building undetected. Only elected officials are allowed to book conference rooms in the Wainwright Building.

It goes to show just how unbalanced the abortion debate has gotten in Missouri. Despite short-lived moments of optimism in 2017, new restrictions encouraged first by Governor Eric Greitens, and then followed by Parson, effectively closed all but one abortion provider in the state.

That wasn't enough for a state whose Republican leaders who have made passing the toughest anti-abortion legislation an annual competition among lawmakers — one that culminated in last week's signing of the controversial eight-week abortion ban, which drew national outrage and even opposition from a top Republican donor.

For patients of Planned Parenthood, the ban elicited terror. Angie Postal, a vice president of education, policy, and community engagement at Planned Parenthood Advocates of Missouri, says she recently got a call from a woman scheduled for an abortion.

"She was asking if she would go to jail if she had an abortion, and that she was trying to get out of an abusive relationship. I could hear this baby the background. She’s like, ‘I have to protect my kid.'"

That woman, Postal argues, isn't being considered by politicians like Parson or DHSS. Sure, that woman could do what many others have done, and travel to Illinois. But what if she can't?

"She’s going to be in an abusive relationship with a man who’s going to put her child that she already has at risk," Postal says. "That’s what Governor Parson is doing. That’s who he’s impacting."

At 12:30 p.m., Green and more than a dozen others revealed their t-shirts and signs. They marched out of the conference room, walked quickly past the confused faces of the security guards, and stood with their backs against the lobby elevators. Then they sat down.

Outside, hundreds of demonstrators filled the courtyard outside the Wainwright Building's front doors, chanting and pressing signs against the large glass windows and doorways. In response, St. Louis metro police arrived to escort employees though the back entrance. Some employees attempted to step over the line of chanting protesters to get to the elevators. Most of them took the stairs, which the protesters left unblocked.

One by one, the protesters read a statement directed at Governor Parson.

"We are part of the overwhelming majority of Missourians who stand with Planned Parenthood and support access to reproductive health care," the statement read. "We will remain here until the license is renewed."

The governor, however, was not at the office he maintains in one of the upper floors of the Wainwright Building. He was being confronted by different protesters in Richmond Heights as he entered a TV studio for an interview.

In the Wainwright Building, police eventually cleared all non-employees and barred anyone without a state ID from entering. Around two hours after the protesters sat down in front of the elevators, they were zip-tied and led to paddy wagons on the street outside.

They were released later that night. In a text message this morning, one of the organizers said sixteen of seventeen protesters were arrested, and all given citations for trespassing, a municipal ordinance violation. (A police spokeswoman said sixteen people were arrested for trespassing; two were released at the scene and fourteen were booked. The reason for the discrepancy was not clear.) Among those arrested were Alderwoman Green and Mead, the Planned Parenthood Advocates director.

The protest did not cause significant disruption, and it certainly didn't attract the sort of violence meted out by St. Louis Police during protests over past police shootings.

But as Missouri approaches the zero-hour for its last abortion clinic, yesterday's action shows that supporters who for decades put their trust in the courts are starting to shift. Even Planned Parenthood, which has long taken a guarded approach to public relations, is taking to the streets and to the government's offices.

Today, Missouri's abortion rights lay in the hands of a single judge. Tomorrow, those rights may very well be gone. To Planned Parenthood and its allies, the next battleground may not be another courtroom.

"I’m angry," said one protester, a Planned Parenthood board member, minutes before taking her place by the elevators. "I'm just angry."