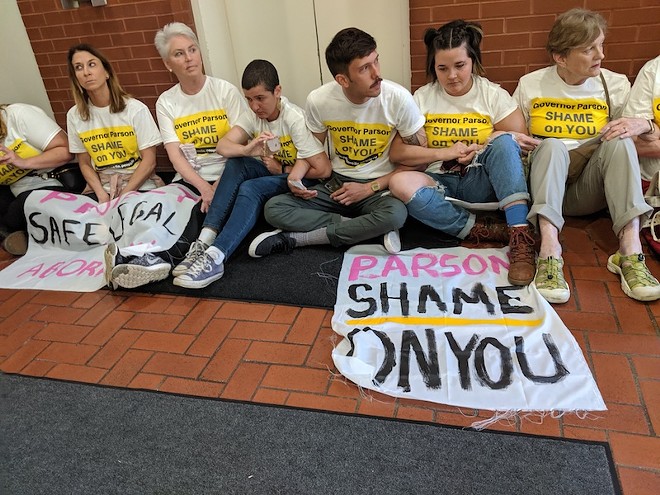 St. Louis Police detained seventeen activists this afternoon who'd vowed to sit in the Wainwright building in downtown St. Louis until a license renewal is granted to the Planned Parenthood clinic in the Central West End.

State officials, including Governor Mike Parson, have offices on site.

The activists blocked elevators on the ground floor before being removed by police around 3 p.m.

"We are part of the overwhelming majority of Missourians who stand with Planned Parenthood and support access to reproductive health care," the statement read. "We will remain here until the license is renewed."

The Central West End clinic, the only one in Missouri performing abortion, will see its license expire tomorrow unless the state Department of Health and Senior Services takes action. Dr. Leana Wen, CEO of Planned Parenthood, has accused the state of weaponizing the licensing process.

Planned Parenthood was in court this morning urging a judge to intervene and issue a temporary restraining order that would allow it to continue to operate, even if the state continues to stall on license renewal. The judge has yet to issue a ruling.

But the activists weren't content to sit and wait. In the noon hour, they staged inside the Wainwright building, even as a large number remained outside holding protest signs. The activists indoors spread out in a coordinated action and, by 1 p.m., had blocked the first-floor lobby elevator.

The action was organized in part by Planned Parenthood Advocates, the political arm of the organization, but other local activists appear to be playing a role. Among the protesters on site is St. Louis Alderwoman Megan Ellyia Green, no stranger to anti-police protests in the city.

Around 1:30 p.m., police ordered the activists to leave. They refused. Around 2:45 p.m., police began making arrests.

A total of seventeen activists were ultimately arrested, including M'Evie Mead, director of policy and organizing at Planned Parenthood Advocates in Missouri, and Alderwoman Green. They were taken to paddy wagons outside the building.

And with that, the elevators were cleared and the sit-in ended, roughly three hours after it began.

Correction: A previous version of this story referred incorrectly to the activists' activity inside the Wainwright building. They blocked the first-floor lobby, not three floors. We regret the error.