Judge Orders the Offsets to Be Permanently Closed to the Public 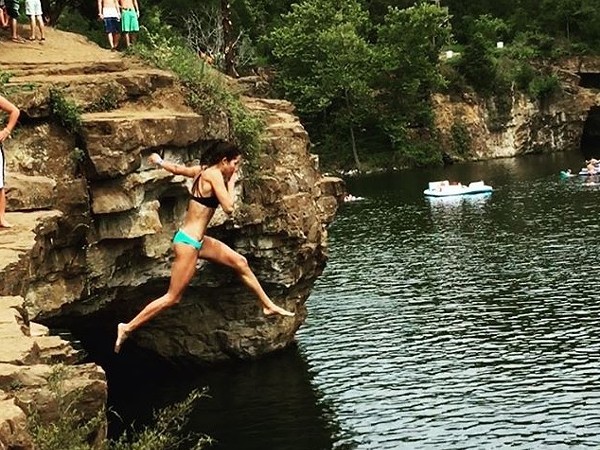 Declaring the site a public nuisance, a judge has ordered the popular Missouri swimming hole known as the Offsets permanently closed to the public unless a series of major changes are made to its operation.

The site, previously known as Paradise Cove, is a five-acre lake in a former lead mine. It's located about thirteen miles south of Farmington, and was a popular recreation area for daredevil St. Louis residents who enjoyed jumping from its 40-foot cliffs.

But in a blistering ruling issued yesterday, Madison County Circuit Judge Wendy L. Wexler Horn blasts the owners of the old quarry for charging admission to the site but doing little to ensure the safety of those who jumped and swam there, or even make sure they were sober while doing so. The result, Horn concludes, was a dangerous situation that resulted in nine deaths over owners Gary and Rebecca Hensons' 30 years in operation.

The ruling came in response to a lawsuit initiated by the Missouri Attorney General's Office last July after two people died at the site.

In a Facebook post Monday, which appears to have since been deleted (but was noted by news outlets), the Hensons said they didn't have the money to fight the AG's Office. "The government should not be able to dictate nor demonize a privately owned business/swimming hole," they wrote. However, because the judge's order was not final at that point, it wasn't clear whether the decision to close was their choice, and whether they might revisit it at some point. (The Facebook post mentioned a GoFundMe to pay for attorneys.)

Yesterday's ruling shows the couple had little, if any, choice in the matter.

In the thirteen-page decision, Judge Horn makes it clear that the site cannot reopen without significant changes. She outlines thirteen steps the Hensons would have to take, from requiring life jackets to hiring lifeguards and posting signage outlining the risks and fencing off or repairing sinkholes.

Despite the series of deaths, the judge notes the Hensons had no liability insurance and no safety personnel.

"Defendants only informal plan is to call 911 and wait for help to arrive," the judge wrote. "However, given the time it takes for first responders to arrive and reach the Offsets swimming area, by the time they reach the Offsets swimming area, there is insufficient time to respond to a struggling swimmer in order to prevent a drowning, a serious physical injury or a death."

Added the judge, "Defendants also allow guests to bring limitless amounts of alcohol onto the property."

And now the party is officially over. In a statement, Attorney General Eric Schmitt praised the closure.

"It was incredibly important to me to ensure that swimmers were kept off the water at The Offsets for Memorial Day until proper safety measures are implemented,” Schmitt said. “As Attorney General, my duty is to protect all six million Missourians, and ensuring that people can safely enjoy summer festivities falls under that duty. It’s my hope that The Offsets will implement the necessary safety features and ensure that their patrons are able to safely enjoy themselves.”