A new report from the Show Me Institute suggests St. Louis is spending more per resident than other cities of its size — but it may not be for the reasons you think.

According to the conservative think tank's just-released analysis, St. Louis actually spends less on administration and less on public services than some of the seven comparison cities. But when it comes to public safety expenditures? Ours are through the roof.

Those findings echo the FBI data showing the St. Louis Metropolitan Police Department has more employees per capita than any city departments other than Washington, D.C., or New York City. It may seem like the Wild West out there, with residents fending for themselves as bullets fly, but it's not for a lack of spending.

Indeed, the Show Me Institute's analysis shows that public safety spending continues to rise, even as the city's population drops. In 2017, it found, St. Louis spent $1,207 per resident, compared to just $787 in Kansas City, $580 in Louisville and $543 in Indianapolis.

Denver was the closest, with $905 per resident in public safety costs, but that's still a ways off. 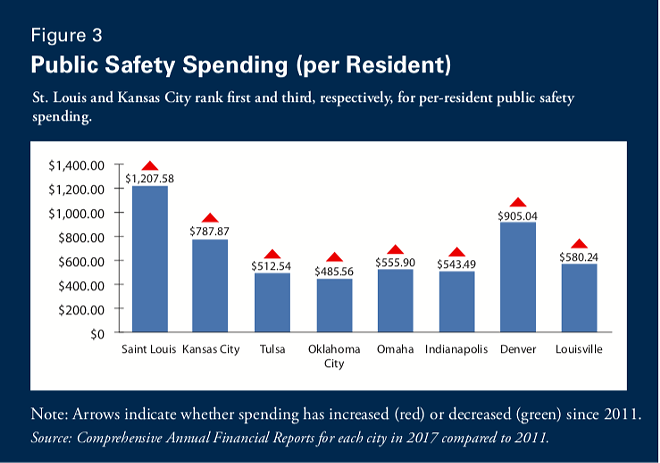 Tsapelas, an analyst at the think tank, notes that spending could be higher because St. Louis has its own sheriff's department rather than relying on a county to provide those functions. And, he says, circuit court expenditures count toward our total for the same reason.

But even those things don't fully account for how high the city's totals are; the circuit court costs, for example, comprise just 11 percent of the public safety total. Lop them off, and we still come in higher than Denver. And that's even though St. Louis officers have by far the smallest footprint to patrol.

Another area where St. Louis leads the pack, in altogether dubious ways? Spending on our debt service. We're spending $369 annually per resident just to make payments on our debt. That's higher than any of the comparison cities (and doesn't, for the record, include airport debt).

We've financed a number of large projects, from Scottrade Center renovations to the Rams stadium (sigh), and now we're stuck with the payments.

Tsapelas worked on the report as a sequel to a 2013 Show Me Institute analysis. He's interested in how some of the cities have changed over time, and stresses that anyone wanting to get to the bottom of any given chart — say, why does St. Louis spend so much on public safety — would need to dig deeper. (The 2013 report did not break down spending by subject area.)

"For me, it's less about any one specific graph and more that when you look across them, you get a general grasp of how these cities are doing," he says. "Denver is really growing. They're changing the ways they collect money and spend money. St. Louis, they're continuing to decline, and they're not really changing the way they're doing things. And Kansas City, whether they're growing or not, they're not necessarily behaving that way."

He adds, "The comparisons do shed some light, or maybe reveal some areas that bear deeper explanation."