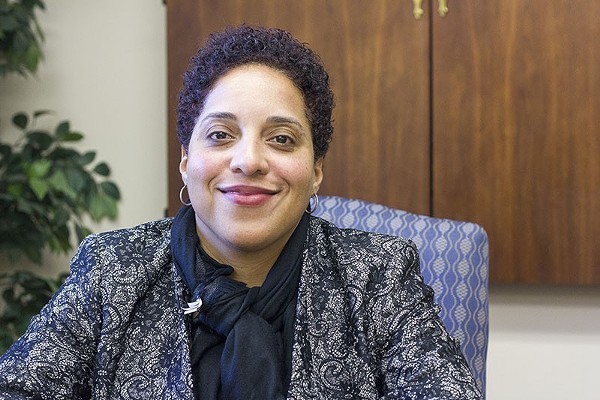 A white paralegal is suing St. Louis Circuit Attorney Kim Gardner, alleging she was fired because of her race.

Nancy Woods worked for more than 27 years in the prosecutor's office before Gardner took office in 2017. She claims in a federal civil rights lawsuit filed today that the new circuit attorney and her top lieutenants targeted white employees, firing several and driving out others.

In January 2018, a year into Gardner's term, Woods says she was summoned to a meeting with the circuit attorney's chief of staff, Michael Warrick, along with Eula Simmons, the office's chief clerk and Woods' boss. Woods claims the two grilled her, repeatedly asking if there was anything she wanted to tell them until she was in tears.

When she began to cry, they backed off, telling her all the attorneys had good things to say about her, the suit says. They reportedly told Woods, who worked the child support unit, that she would be moved to another office.

It was the first of three meetings, the suit says. In a second with Warrick and Simmons, Woods claims she was told she was rude and not a team player.

Steele, who has since gone to work for the St. Louis Prosecuting Attorney, told Woods she wasn't a team player and that it was her last day, the suit says. When Woods refused to resign, she was fired and escorted out by armed investigators who worked for the prosecutor's office, according to the suit.

Steele, Warrick and Simmons, all of whom are black, are named as defendants in the suit.

Circuit Attorney's spokeswoman Susan Ryan told the RFT in an email: "The Circuit Attorney’s Office has not been served in this lawsuit. Given this, it is premature and improper to comment on this matter."

The RFT wrote in September 2018 about the turbulence and turnover in the office after Gardner took over for longtime Circuit Attorney Jennifer Joyce. Former and current prosecutors told us Gardner walled herself off from staff during her first months in office, and multiple former prosecutors claimed that she and her top advisors seemed hostile to the attorneys and staff.

However, their interpretation of Gardner's motives were mixed. Several said the new leadership targeted white staff, but others told the RFT she seemed to be more interested in purging the office of anyone she suspected of being loyal to Joyce, which included black prosecutors.

Woods alleges in her suit that race was an early undercurrent of firings and bad treatment. At a staff meeting, Steele told white employees, "You people might think we're stupid because we are poor and black, but we're not," the suit alleges.

The suit also alleges age discrimination. At the time of her firing, Woods was 64, and she was replaced by a much younger, black employee, she says.

The suit seeks an unspecified dollar amount for lost wages as well as compensation for pain and anguish and a punitive reward.