A sex offender who stole a patrol car from a Jefferson County Sheriff's deputy has pleaded guilty to a federal felony.

Timothy Hopkins, 43, was originally stopped in June 2018 for skipping out on his bill at a gas station, authorities say. The sheriff's deputy ran his name and discovered he was wanted on a warrant out of St. Charles County for failing to register as a sex offender.

Hopkins, of O'Fallon, Missouri, had been convicted in 1993 of sodomizing a fourteen-year-old boy. And when he was stopped last year in Jefferson County, he quickly decided he wasn't waiting around to go to jail.

Prosecutors for the U.S. Attorney's Office say the handcuffed ex-con managed to slip his hands from his back to his front, climb behind the wheel of the patrol car and drive off.

Over the next three hours, he led officers from multiple agencies on a frenzied manhunt. He later admitted he stopped at the Richwoods home of James Martin and persuaded him to cut off the handcuffs. In return, he let Martin help himself to a twelve-gauge shotgun, AR-15, badge, flashlight and a multi-tool from the patrol car.

Martin later handed off the AR-15 to a 30-year-old ex-con named Richard O'Hara. 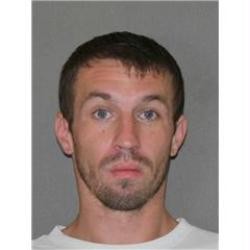 Soon, Hopkins was off again. He crossed into Washington County and was still on the run when law enforcement finally caught up with him on a dead-end street. Cornered, he put the patrol car in reverse and wheeled through fields and woodland trails. He eventually crashed into a ditch and bolted out of the window.

He was only caught after he tripped and fell, authorities say.

He, Martin and O'Hara, who had taken the AR-15, were all indicted on federal charges. Martin pleaded guilty in March to possession of a stolen firearm and is set to be sentenced on June 27.

Hopkins and O'Hara both pleaded guilty on Friday to being a felon in possession of a weapon. They face a maximum of ten years in prison.

Jefferson County Sheriff David Marshak said in a statement his deputies have undergone training since the incident to make sure nothing similar happens again.