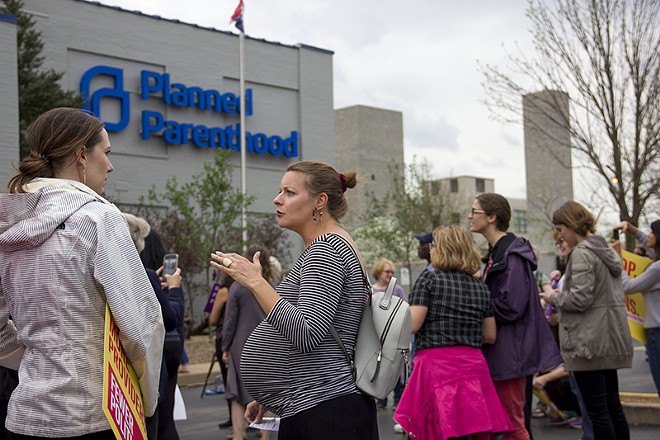 Four a.m. is generally a bad time for making decisions, but it was at that hour this morning that the Missouri Senate passed a bill to restrict abortions to eight weeks, when a "fetal heartbeat" can be detected — and to criminally charge doctors who break that law with a felony carrying a maximum sentence of fifteen years in prison.

The vote reflects the race to the bottom for abortion access rights among states including Indiana, Ohio, Georgia and Alabama, whose governor signed a law this week that flatly bans abortion in all situations except medical emergencies. Alabama's governor admitted that the law is unenforceable; she hopes bring the issue to the U.S. Supreme Court (and new member Brett Kavanaugh) for yet another attempt to undo the rights conferred by the decision in Roe vs. Wade.

Now, Missouri appears to be angling for a piece of that U.S. Supreme Court action as well.

Missouri's bill doesn't go as far as Alabama's, and it's also distinct from the draconian measure passed in Georgia, which seeks to charge women who travel out of state for abortion with conspiracy to commit murder. In contrast, the bill the Missouri Senate approved last night includes language stating that a woman who obtains an illegal abortion "shall not be prosecuted for a conspiracy."

But even though the Missouri bill technically allows abortions, the window if so small it might as well be a blanket ban. The eight-week limit is based on the detection of what the bill defines as a "fetal heartbeat." But a heartbeat can be detected in many cases before many women even know they're pregnant.

According to state data, that restriction would essentially ban abortion in Missouri. In 2017, for instance, Missouri recorded 3,903 abortions, and more than 57 percent took place after nine weeks. It's actually not clear just how many abortions took place prior to eight weeks, since the available online records don't go that far back. The records only indicate that 1,673 abortions were performed at "under" nine weeks.

According to the text of the bill passed this morning, only a medical emergency would allow a woman to obtain an abortion after an ultrasound has detected a brainwave or heartbeat. (There are no exceptions for rape or incest.) It's worth noting that, at six weeks, an embryo is not viable and that its "heartbeat" represents an electrical pulse jolting a clump of tissue no bigger than a quarter.

"Politicians are putting the health and lives of Missouri women at risk in their race to make our state the one that overturns Roe v. Wade at the Supreme Court," said M’Evie Mead, director of policy and organizing for Planned Parenthood Advocates in Missouri, in a press release this morning.

"These bans on safe, legal abortion will have real costs — expensive legal costs and human costs for the women and families who need reproductive health care."

Meanwhile, Missouri Governor Mike Parson seems all but certain to sign the law once it reaches his desk, though before that happens Senate's version will have to gain approval in the House. On Wednesday prior to the vote, he championed the bil, posting on Facebook, "It's time to make Missouri the most Pro-Life state in the country!"

Later that afternoon, still hours before the all-night session that resulted in a 24-10 victory for the Senate's Republican super-majority, Parson held a press conference that including remarks from the bill's sponsor, state Representative Nick Schroer (R-O'Fallon), as well as House Speaker Elijah Haahr (R-Springfield).

Haahr contended that the bill was not, in fact, a legal strategy solely aimed at giving Missouri a chance to overturn Roe vs. Wade. It was taking a stand "for the innocent" and "infirm."

Haahr, though, hasn't always displayed such a conscientious attitude around the issue of reproduction. Hours after the press conference, a Twitter account named "Fake Elijah Haahr" posted photos appearing to show a younger version of the House speaker dressed in a lab coat costume stitched with the name "Dr. Seymour Bush, MD Gynecologist."

He wants to put the strictest laws on abortion in Missouri.

Those photos were widely circulated last night. Haahr has yet to address them on social media.


Editor's note: A previous version of this story contained inaccurate information about the final version of the bill approved by the Missouri House and Senate. It bans abortion at eight weeks, not when a fetal heartbeat is detected. The "heartbeat" provision was removed by the Senate on May 16. We regret the error.