In social media posts brought to light last week, David Heyen suggested it was a problem to have Muslims in Congress and claimed that countries without Muslim residents suffer no terrorism. But despite calls for his resignation and a contentious meeting Tuesday, Heyen refuses to resign: He remains chairman of the board of trustees at Lewis and Clark Community College.

The seven-member board doesn't have the authority to remove its own members. Instead, the board voted on a motion to request Heyen remove himself as chairman — and it couldn't muster the votes for even that polite entreaty. A vote on the motion last night failed after Heyen cast the tie-breaking vote against it, prompting a wave of hisses and booes from the dozens of protesters in the audience.

If Heyen was contrite, he didn't show it. And he apparently couldn't even be bothered to write a new defense for himself. Instead, he read the same statement he gave to KSDK last week in its coverage of the controversy, claiming that he is "relatively new to social media."

"I did share some posts in order to generate conversation about various topics on my personal Facebook page," Heyen acknowledged in the statement. Then he pushed back on calls for his resignation, blasting the "small faction of people who are not happy that I have asked tough questions."

That "small faction" was, in fact, in attendance — more than 50 protesters, despite the meeting's location in Godfrey, Illinois, about a 45-minute drive from St. Louis. Also in attendance was the local reporter, Cory Davenport of the Riverbender, who supplied the community college on May 1 with screenshots from its board chairman's private Facebook page.

According to the screenshots uncovered by Davenport, Heyen's idea of "tough questions" includes memes from pages called "Sons of U S A" and "Legal Immigrants for America." One meme shared by Heyen asserted, "Muhammad owned many slaves. Robert E. Lee was against slavery. So why are we tearing down statues of instead of mosques?"

Another meme featured a photo of an old cowboy wearing a duster and carrying a rifle against an American flag background. The caption states, "Does it worry anybody that we have three devout Muslims in Congress who have unlimited access to our TOP SECRET DOCUMENTS?"

The memes are, in the way of the internet, laughably wrong — Iceland and Japan have Muslim residents; Robert E. Lee owned slaves and fought a war for a country built to defend it; and that old bigoted cowboy doesn't know shit about Congress or top secret documents.

Still, Heyen, who joined the board in 2017 and was recently elected to a two-year term as chairman, contended during the meeting that he was the victim of an effort to distract the college from pressing financial issues.

"We refuse to be distracted," Heyen said in the conclusion of his statement.

Heyen enjoyed assistance from fellow board members in his efforts to shift the subject. Vice chairman Julie Johnson offered a plea to other board members: "Do you really know who David Heyen is?"

Johnson continued, praising Heyen for his work for the college. She asked that voting members "talk to his grandchildren who adore him."

After she finished, an audience member shouted back, "What about Muslim grandchildren?"

Another board member, Charles Hanfelder, said Heyen had done "nothing wrong," and that he thought it "just absolutely, nearly, criminal that there are people who are trying to damage his personality and his personal self." 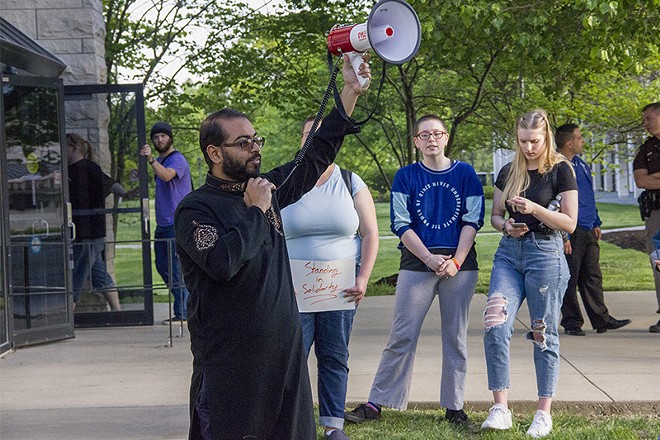 Listening in the crowd was Faizan Syed, the director of the Missouri chapter of the Council on American–Islamic Relations. Before the meeting, he'd joined the dozens of protesters outside the auditorium to deliver his own message — that anti-Muslim memes and messages aren't "conversation." They aren't excusable.

And, Syed notes during an interview, people who have been exposed for sharing racist messages never seem to want to apologize.

"What kind of conversation is [Heyen] trying to start? That our community would be better without Muslims?" Syed says. "That's the real conversation."

The examples aren't hard to find. Syed points out that a mosque in Connecticut was burned just this weekend in an apparent act of arson. In his speeches and outreach for CAIR, Syed — whose efforts were the subject of an RFT cover story in May 2017 — often describes his experience working to rebuild Joplin after a tornado devastated the city in 2011. Two years later, a self-described "crazy as shit" Iraq war veteran burned down the Joplin Islamic Center.

By now, Syed is used to the reaction of those accused of spouting anti-Islam messages: the reflexive victimhood, the counter-charge that, in fact, it is Muslims and their supporters who are trying to destroy a blameless college official's reputation.

The conversation Syed is worried about, though, isn't the one happening inside a college board meeting, but the one that happens in the mind of someone troubled enough to burn down a mosque. What would that person make of Heyen's defiance, or his suggestion that it makes more sense to tear down mosques than Confederate monuments?

"Maybe for them it's just a joke," Syed says, "but there are real, serious consequences that are happening to people in the real world."