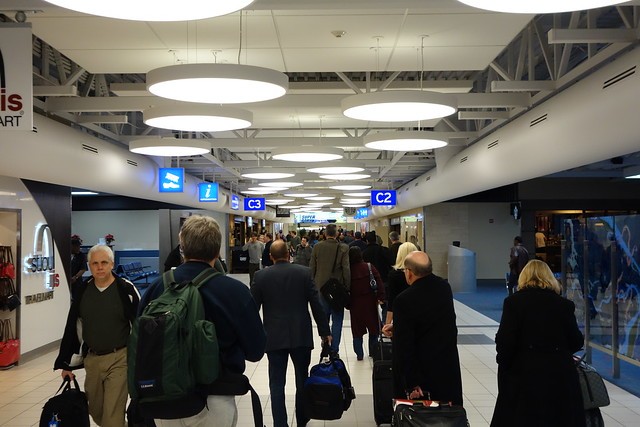 The consultants exploring privatization of St. Louis Lambert International Airport were scheduled to speak at a neighborhood meeting on Wednesday, May 8. They'd been invited by Alderwoman Cara Spencer. And the day before, one reached out to Spencer to confirm.

"I will be in attendance at the meeting on May 8th along with a few colleagues representing Fly 314," Douglas Petty emailed. "Please confirm location and time frame set aside to engage your constituents. This is follow-up number 2. There will need to be a confirmation by the end of today or we will make ourselves available on another date."

Spencer wrote back with the address and time, in just twelve minutes. But then Petty wrote her again a few hours later — this time to pull the plug.

"After conferring with the rest of my team, we will not be able to accommodate tomorrow’s meeting," he wrote. "Flight schedules and cost make 24 hour notice cost prohibitive."

It wasn't just the rapid about-face that made the exchange odd. It was also the suggestion that travel would be necessary.

Spencer had originally contacted the consultants exploring airport privatization in St. Louis through their designated Fly 314 website a few weeks before, asking someone speak at the meeting. She hadn't asked for a particular person or named an area of expertise. It never occurred to her that someone would be coming from out of town. As she fired back in an email to Petty, "I’m shocked that Fly 314, an organization with 41 people listed as advisors, many of whom are local, does not have a single person in the 314 area code."

As Spencer suggested in her tart reply, Fly 314 has many people on its payroll. After the city signed off last June on hiring consultants to explore leasing its airport to a private company, those consultants scaled up, and quickly.

The Rex Sinquefield-affiliated lobbying group Grow Missouri leads the team. In the first quarter of 2019 alone, its contractors racked up more than $2.39 million in invoices, records show. And that doesn't even include Grow Missouri's work, just the companies and firms invoicing it.

None of that is costing the taxpayer — yet. Unless a lease is approved by the city, Sinquefield pays the bills; if the airport is leased, the payments get rolled into whatever deal is approved.

But while the efforts are not costing us, it's also notable how little they're engaging us. Yes, Fly 314 has a nice, professionally designed website, and its own "transparency portal," which has documents in volume. (If you know where to look, you can find the contractors' payments cited above.) There's also a city working group, set up to supervise the consultants; it holds regular meetings that are open to the public.

But looking at its minutes, it seems clear that the working group does its real business behind closed doors, in executive session. And rather than meet the citizens where they are — like, say, the 20th ward neighborhood meeting, which ended up drawing approximately 65 residents — Fly 314 has focused on informational meetings in local libraries, meetings where you'd have to monitor the Fly 314 website even to be aware they were happening.

And as for engaging the people most interested in what they're working on, the St. Louis Not for Sale group pushing for a public vote on an airport lease, Fly 314 seems determined not to be caught in the same room.

In the working group's April 25 meeting, Fly 314's LeJuan Strickland explained that they'd been invited to speak at the Democratic Central Committee. Chairman Michael Butler (who is also the city's recorder of deeds) had invited both Fly 314 and the St. Louis Not for Sale group to present their perspectives.

Fly 314 decided not to participate.

"My thoughts on it is that we don't attend a panel where it's pro/con," Strickland explained to other members of the working group. "We're not at that point yet for pro/con, because there's really nothing to be pro/con ... we can come and give a brief update of where we are and the timeline, same thing we've been doing to other community groups, if we're OK with that." Fly 314 ended up skipping the meeting entirely. (he Democratic Central Committee voted to oppose privatization plans.) To date, it has yet to appear at any forum where St. Louis Not for Sale is also a guest.

The Fly 314 group knows its meetings haven't been generating much interest. Later in the same working group meeting, Strickland discussed the consultants' decision to stop recording their public presentations.

"We haven't been taping every meeting," he says, "because the attendance has been so low, and the questions are the same. .... We may get two, three people at some of these meetings."

Josie Grillas, a St. Louis Not for Sale member who caught a library meeting on March 28, says it was distinctly underwhelming. Three other members of the public attended alongside her, and the others indicated they had gotten fliers on their door just that afternoon, for a meeting that started at 6 p.m.

"It's just so blatant that they don't care about reaching out to the public," she says.

Asked if a desire to avoid pro/con debates was why he'd canceled Fly 314's participation in the Ward 20 meeting, Petty said it was not. (Communications manager for the airport working group, he declined a phone call, but answered a few questions over email.)

"The allusion being implied does not apply to me," he wrote. "We are looking forward to meeting with Alderwoman Spencer and the 20th ward constituents when we are extended a reschedule date."

But Spencer, who herself has been critical of privatization efforts, sounds skeptical on that prospect. "I think we should be having discussions with the general public, and welcome that," she says. "Clearly, that's not what Fly 314 is doing."