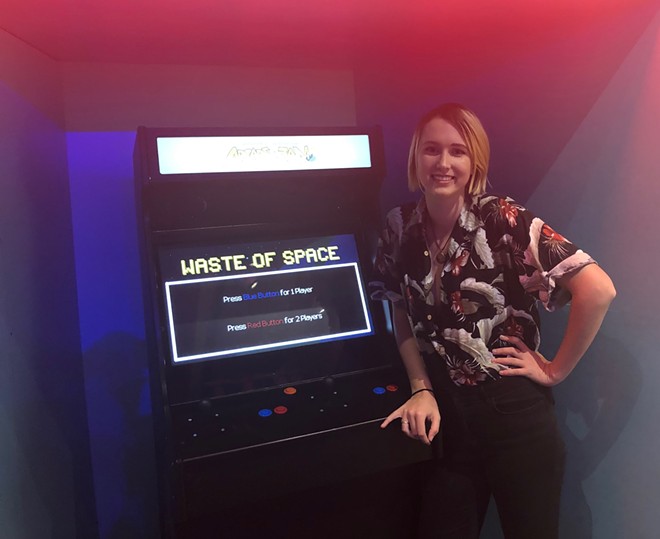 More than a dozen students and a (now former) adjunct professor say Webster University's "Games and Games Design" program is facing a breakdown over its lead faculty member, Joshua Yates, who was the subject of a Title IX complaint from a female student in 2018.

That student, Tamsen Reed, graduated just last weekend, earning a bachelor's degree after majoring in game design. She provided her original Title IX complaint to Riverfront Times, which alleges that Yates was "bragging to other students that [Reed] was coming on to him."

Reed says other students told her about Yates' inappropriate comments. Her complaint included screengrabs of their reports, which included Yates asking them if Reed was the type of student who would have sex with a professor for a good grade.

Yet even though Reed complained to the university in May 2018, providing documentation and lining up witnesses, she says it failed to act.

Last Thursday, days before Webster's commencement ceremony, Reed and her supporters released a packet of statements covering more than 60 pages of complaints about Yates. Tweeting out a link to the material, Reed wrote that she had chosen to go public "in the spirit of the #RiotWalkout," referencing a mass employee protest at Los Angeles-based Riot Games last week over allegations of a workplace abuses and enforced arbitration.

In the spirit of the #RiotWalkout, I think it's time to speak about my experience with the #WebsterUniversity game design program. @websterpres, I hope you're listening.


The next day, Webster adjunct assistant professor and St. Louis video game maker Rob Santos announced that he was resigning in support of students like Reed. He publicly blasted the "predatory academic misconduct in the #gamedev program."

I am resigning from @websteru to join students/faculty in protesting sexual harassment and predatory academic misconduct in the #gamedev program. Please share our stories which can be found at https://t.co/uKAA1o0VCx @websterpres these students deserved better. It’s not too late. pic.twitter.com/VjQdXKvBU8


Title IX complaints use as their base a 1972 federal civil rights law prohibiting sex discrimination in education programs receiving federal funding. Title IX implementation is a highly fraught subject for universities. Schools in Missouri and across the country have been blasted not only by victims — who often encounter a lack of transparency and accountability from officials — but also those accused of violations, who must defend themselves in a system that doesn't provide the due process rights of regular criminal courts.

But while many Title IX complaints focus on student-to-student interaction, Reed's is directed at the professor running the department she just graduated from — and the inappropriate conversations he had about her with other students.

In one text exchange included in Reed's complaint, a student told Reed that her professor's interest in her had been "a topic of discussion for a few weeks," and that Yates had asked the class if Reed was "trying to flirt" with him.

In a second text exchange, a different student told Reed that Yates had "built up an extremely stupid idea that you were possibly trying to seduce him," and that the professor had presented the in-class discussions about her as a "form of defense" just in case she later filed a Title IX complaint against him.

After filing the complaint, Reed was taken out of her class with Yates and placed in another class with a different professor, Santos, who is now joining her protest. Beyond taking that action, though, Reed says Webster's Title IX office has stopped responding to her emails requesting updates on its investigation.

Yates, Reed says in an interview, "skeeved me out from the beginning." As a result, she says, the two "had very limited contact" outside the classroom. She says there was no attempted seduction between them.

Instead, Reed says she learned of her professor's fascination with her from students taking his other classes. During one particularly uncomfortable moment, she says she was on a first date with one of Yates' interns when the young man remarked, "Oh, you're the one that Yates was bragging about coming onto him.'"

A Michigan native, Reed says that she enrolled in Webster's video game design program after meeting a school representative at a local college fair. Admission, she adds, came with "a good scholarship," and despite the non-traditional major, it prompted her to make the move to St. Louis.

Launched in 2014, video-game design is a relatively new major at Webster. A degree in the field offers no guarantee for employment in an industry where such degrees remain rare, and where game developers expect prospective employees to posses specific technical skills and a serious portfolio.

It's also an industry with a longstanding sexism problem.

"I was aware of what it meant to be a woman joining the industry," Reed says now. "I braced myself for the impact of being undervalued and being sexually harassed, but I didn't think it would be so soon. I expected to at least join the industry before it happened."

The public complaints from Reed and thirteen other students go beyond Yates' alleged statements about Reed. In written statements, multiple students describe Yates broadly as an incompetent game designer and uninterested educator who refused to teach the skills required to complete his assignments.

One student, Patrick Rausch, concluded his letter with a plea to Webster: "Please start giving a damn about the game majors. Stop giving us false hope for new hardware, facilities, and people who know what they are doing. We deserve a quality education too."

Reached by email, Yates declined to comment on Reed's Title IX complaint, writing, "Those proceedings are confidential and I will not breach the confidentiality of any party, nor address any questions pertaining to those proceedings." He referred questions about his teaching performance to Webster.

In addition to Santos, Lisa Brunette, a visiting assistant professor who worked alongside Yates in the video game design program from 2017 to 2018, has thrown her support behind the student protest. Brunette's statement described a "toxic culture" at Webster that gave cover to Yates' incompetence.

Santos, who resigned Friday, wrote that he became alarmed after encountering students taking Yates' classes and realizing they were "seniors in a games design program who have never coded before."

And for those students who did have game design skills, Yates purportedly had other plans. Among the students complaining are those who worked at Yates' company, Accordion Games. An anonymous Webster student gave Tamsen a redacted contract that includes clauses for non-competition and non-disparagement, and a provision requiring the student employee to devote "substantially all of his business time" to company work.

In an email, Yates says that "Accordion Games was registered with the University and authorized to provide for-credit internship opportunities for students." He adds, "No students were ever requested to sign a contract at any time as part of the internship program."

Rausch, the Webster student who wrote about wanting Webster to "give a damn" about the game design program, tells a different story. When Rausch sought work as Yates' student intern, he claims the professor "insisted I sign [a contract] on several occasions," saying, "He did in fact ask me to come by and sign paperwork in his office which I did not, because I knew it was a shitshow."

Reed provided RFT with text messages from two other students she said had been Yates' interns. Both wrote that they signed contracts with Accordion Games.

It wasn't just the contracts that raised concerns for students. As a professor, Santos says he monitored Yates' student employees; he claims that none were ever paid and that Yates repackaged student work as his own.

In his emailed response to RFT, Yates did confirm that the company's game GloGo began as a student project. Yates writes, however, that he published the game at the behest of the student creator, and that while he has offered the creator compensation "from the few sales that the game made... they have refused to accept their royalty payments at this time."

In response to RFT's request for comment, Webster University spokesman Patrick Giblin responded Tuesday evening by addressing only the most general details of the controversy, writing, "Webster University is committed to providing a safe and productive learning environment free from unlawful discrimination of any kind."

As for Reed's allegations of sexual harassment, Giblin notes that the school is bound by confidentiality laws and cannot comment on the Title IX process. He says, "The University takes the recent allegations regarding its Title IX procedures very seriously and has engaged an independent investigator to examine the merit of these claims."

Although Giblin did not address Yates' teaching performance, the statement implied the school recognizes the array of complaints raised against Yates.

"The University is investigating all related allegations," Giblin wrote, and added that Webster "will continue to maintain its strong commitment to providing an educational environment that fosters open and individualized learning experiences for all its students."

Editor's note: A previous version of this story referred incorrectly to Patrick Rausch's involvement with Joshua Yates' internship. Rausch looked into it, but did not ultimately sign on as an intern. We regret the error.