The stepson of a murdered Missouri Ku Klux Klan leader has been found guilty of involuntary manslaughter in the 2017 killing.

Paul Jinkerson Jr. had been charged along with his mother, Malissa Ancona, with first-degree murder in the shooting death of Frank Ancona Jr., but jurors ultimately settled on the lesser charge.

The case against the stepson became more complicated last month when his mother pleaded guilty to shooting her husband in the couple's bedroom — and insisted her son never fired a shot.

The shooting had been the subject of a Riverfront Times cover story in March 2017.

Malissa Ancona has told shifting stories about what happened, originally accusing her son of murdering her husband. But after changing her story, she testified for the defense during her son's two-day trial, the Park Hills Daily Journal reported. Jinkerson testified in his own defense as well.

Along with Malissa Ancona's in-person testimony, jurors listened to recordings of a series of interviews Malissa did with a detective. Her accounts varied wildly, sometimes claiming a second, unnamed man carried out the killing with her son. Jurors also read text messages in which the mother and son appeared to be coordinating their story in the aftermath of the shooting.

Frank Ancona was the Imperial Wizard of the Traditionalist Knights of the Ku Klux Klan, a tiny chapter he ran out of his ramshackle house in the St. Francois County town of Leadwood. He and his wife had a contentious relationship, in part because she had turned their home into an off-the-books animal rescue, relatives and acquaintances previously told the RFT.

The doomed klansman suspected she was trying to poison his food, possibly so he would fall asleep and drive off the road during his overnight courier job, he confided in text messages to his wife's estranged daughter.

Malissa Ancona ultimately took a more direct approach, blasting him in the head. Jinkerson admitted during the trial he had helped his mother clean up the crime scene but claimed his involvement ended there, the Journal reported. 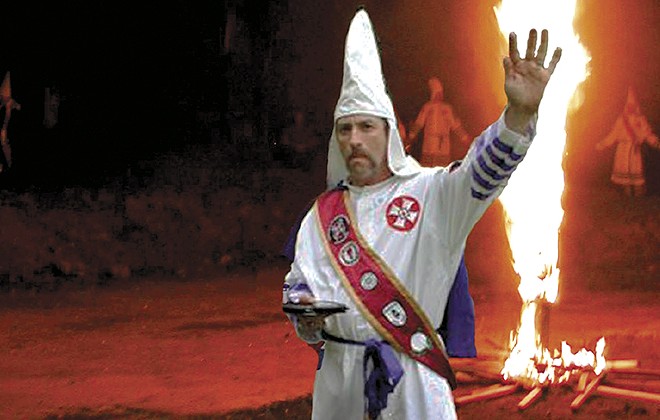 Investigators, however, have long believed Frank Ancona was shot with a shotgun as well as a handgun. St. Francois County Sheriff Detective Matt Wampler testified during Jinkerson's trial that in his interviews with Malissa Ancona it became clear she had no idea how to work a shotgun, the Journal reported. Both weapons were eventually recovered after she told authorities where they had been dumped.

Jurors deliberated through Tuesday night before delivering their verdict at 1 a.m. on Wednesday. Along with involuntary manslaughter, Jinkerson was found guilty of armed criminal action, abandonment of a corpse and tampering with evidence.

He is scheduled for sentencing on July 19.