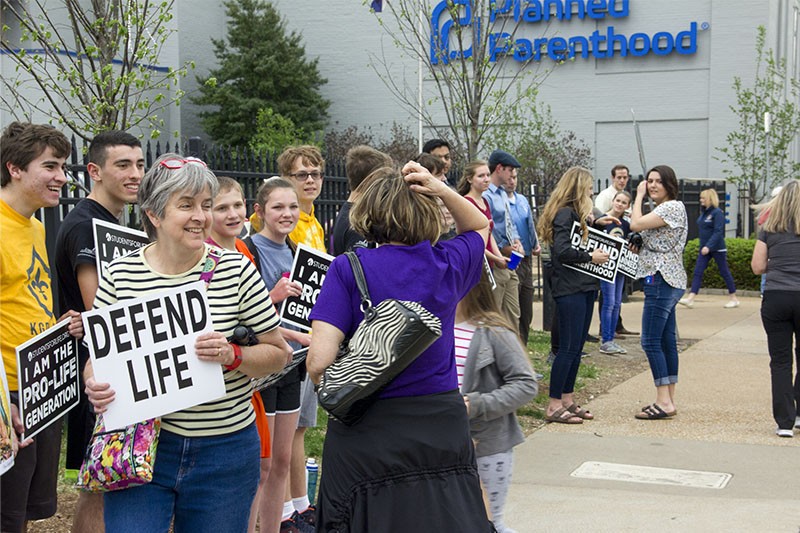 This morning, the local storytelling platform Humans of St. Louis began publishing a series of portraits and interviews with abortion rights advocates — with the first featuring a woman who volunteers at the Planned Parenthood clinic in the Central West End, escorting patients past protesters.

On Saturday, however, it was two such protesters who were given the feature treatment by the site — sparking backlash from some of the page's nearly 100,000-strong fanbase. Comments on the Facebook posts featuring the two protesters now total more than 800 each, with fierce arguments breaking out in reply threads.

In a Facebook post Sunday, Humans of St. Louis apologized for the "lack of context" in two weekend posts featuring pro-life protesters, and in one case "for not adding more information to let viewers know where the photo was taken."

The first photo in question, depicting an unnamed young woman wearing a yellow vest outside the Planned Parenthood clinic, was presented in the project's usual style, which meant that it lacked details about the location or the circumstances around the photo being taken.

The woman pictured explained that her mother had originally sought to have her aborted, and now she wanted to become an ultrasound technician "so I can enable women to see images of their baby."

Some commenters expressed confusion — was this woman in an high-visibility vest a protester or a clinic worker? But many knew exactly where she was coming from, and what her presence meant for patients simply trying to enter the clinic. One commenter charged that the page had chosen to highlight a woman trying to share misinformation to shame other women considering abortion.

Another commenter wrote, "A lot of us feel like you took a side today."

Indeed, while the photo and the accompanying quotation didn't delve into it, there's a long history of conflict between pro-life protesters and abortion clinics. Patients of the Planned Parenthood in the Central West End report regularly enduring verbal harassment from the crowds of protesters who attempt to intercept cars pulling into the parking lot. Clinics and doctors have faced threats to their lives, and livelihoods.

That context, the site's critics charge, was also missing in a second Humans of St. Louis post from Saturday, presenting a protester who credited his girlfriend for getting him active in the pro-life movement.

This time, the protester's quotation conveyed his attitude toward sex and reproduction: "There is no justifiable reason to have sex outside of a lifetime commitment of marriage."

The post, too, attracted immediate push-back in the comment section. Why, some commenters asked, was Humans of St. Louis highlighting the views of a man trying to stop people from obtaining legal healthcare? Why give a platform to someone who believes his religious beliefs should dictate zero access to condoms or contraception?

And where was the merit in broadcasting the views of people who already shout their positions at women simply trying to enter the clinic?

We have them shouted at us when we try to get free health care at Planned Parenthood.

We have them hissed at us by protestors when they follow us out of the clinic safe zone.

We have them written on signs.


In Human of St. Louis' response posted Sunday, the answer came as a long explanation of how the page approaches subjects — as street photographers and storytellers, not as a platform for endorsing viewpoints. (The project, while inspired by the original photoblog phenomenon Humans of New York, is not associated formally with it.)

"It was pointed out that the first story we shared yesterday of the woman was misleading and lacked context," the statement acknowledged. It went on to explain that, on the day the young woman was photographed, its photographer did not go inside Planned Parenthood "because this is mostly an outdoor street project."

The statement continued, "Why didn’t we have stories ready in the line up of the 'other' side? Because we try to rely on the organic nature of running into people as opposed to setting up interviews. Subjects who agree to be interviewed choose what they want to talk about from answering open-ended questions."

Part of the issue, the statement explained, was that Humans of St. Louis had not planned the two Saturday posts as part of some larger package of content around abortion, but rather as subjects framed in the page's established aesthetic — a slice of life contained in an attractively composed photo and interview excerpt.

"The intention wasn’t to do an entire series on abortion," the statement noted. "However, we’re certainly supportive of sharing those viewpoints too and think that it is appropriate – especially as a means of sensitivity on an immensely personal issue – to include stories from people who are pro-choice."

That's what is happening now, with the first such counter subject published this morning. The woman in today's post, who volunteers to escort patients into clinics in both Missouri and Illinois, is presented alongside lengthy quotes that detail her own abortion story and experiences with protesters.

She is quoted saying that protesters in the Central West End often assume the stance of "benevolence and kindness," whereas those protesting the Hope Clinic for Women in Granite City, Illinois, shout at women and call them murderers.

"In St. Louis," the escort explains, "it might take a minute [for patients] to realize what they’re trying to do and who they’re affiliated with because their tone is so different."

"But," she adds, "both groups protesting are the same people."

On Saturday, some fans the photo project — even ones stating that they are unequivocally pro-choice —- had defended Humans of St. Louis' practice of letting its subjects speak without offering judgment (or additional context). But far more of its audience seemed pleased by today's attempt to aggressively seek out the counterbalance the site generally avoids. "Thank you for being there for another human being," one person wrote in response to the clinic escort's story. "I agree in letting people make their own choices period!"