In Knock Down the House, Cori Bush Wins Hearts, But Not Enough Votes 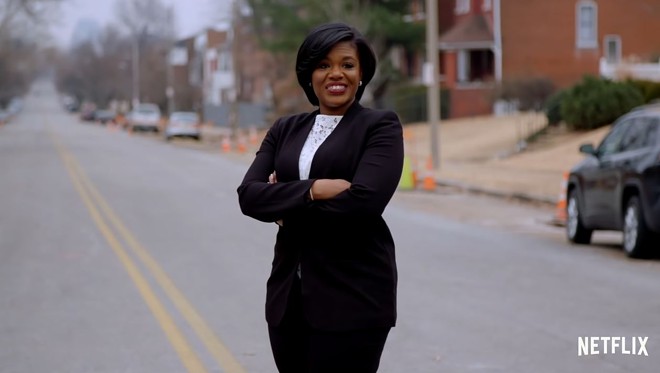 The widely hyped documentary Knock Down The House hit Netflix yesterday, bringing viewers the rousing story of the election of U.S. Representative Alexandria Ocasio-Cortez (D-New York) — but it also gives the world glimpses of St. Louis' own Cori Bush.

Like Ocasio-Cortez, Bush had been recruited by the Bernie Sanders-inspired activists of Justice Democrats and Brand New Congress, which sought to organize a slate of working-class candidates who could back policies like Medicare for all, free college tuition and criminal justice reform.

During her campaign, Bush spoke often about her own life reflecting the people she hoped to represent. That life is present in comparatively few scenes in Knock Down The House. Still, it capably presents the uphill political fight she faced in challenging U.S. Representative Lacy Clay (D-St. Louis) in Missouri's first congressional district.

Between Lacy Clay and his father, Bill Clay, the district has been represented by the same last name since 1969. Bush sought to change that, but it meant challenging a Democratic candidate with vast name recognition and generations of voter support.

At one point in the movie, Bush is shown canvassing a neighborhood and talking to a older man, who points out that Clay's long tenure is itself a value.

"The whole point is you get seniority in that place up there, it does count," he tells Bush.

She has an immediate answer:

"Yeah, but who does it count for? Does it definitely count for us, do we feel the seniority?"

It's one of the strongest moments in a film that lingers only momentarily on candidates not named Alexandria Ocasio-Cortez. Which makes sense, since then-28-year-old Ocasio-Cortez is only candidate featured in the documentary to win her race, toppling longtime incumbent Joe Crowley in the Democratic primary.

As the film progresses, the movie's focus narrows, following Ocasio-Cortez beat for beat as momentum swells around her charisma and confident dismantling of her opponent's establishment politicking. Come election day, the documentary's three other principal subjects — Bush in St. Louis, Amy Vilela in Nevada and Paula Jean Swearengin in West Virginia — fall short.

In her last scenes in the film, Bush is shown on election night, August 7, making a concession speech. She wipes away tears. Then the movie transitions back to Ocasio-Cortez for a climactic debate with her establishment opponent and, soon after, a jubilant scene of victory.

Now Bush is aiming to challenged Lacy Clay in 2020. It's still a long shot, but Knock Down The House shows that nothing is truly impossible in politics. Who's to say a political dynasty can't be unseated by an activist who insists on knocking on the door?

It remains to be seen if St. Louis is ready to let her in. But for now, looking back at 2018, at least we can watch a different ending play out on Netflix.