A Ladue police officer has been arrested for shooting a shoplifting suspect last week outside of a Schnucks grocery store.

Officer Julia Crews, 37, was charged today in St. Louis County with second-degree assault, a felony. Prosecutors and her attorney agree that she shouted a warning that she would tase the fleeing 33-year-old woman, but then pulled out her pistol instead of her stun gun. The wounded woman remains in the hospital but is expected to survive.

St. Louis County Police said the Ladue officer, who has been on the force for thirteen years, responded to reports of a shoplifting and disturbance involving two suspects. She stopped one of the suspects, a 33-year-old woman, moments after she ran out of the store. The woman told the officer she had suffered some kind of injury.

In a statement after the shooting, Schnucks said the woman was one of two shoplifters who tried to steal a shopping cart full of stuff after paying for only a couple of items.

The woman's companion is said to have run away immediately when employees stopped them at the door, but the 33-year-old stayed and gathered several stolen items, along with balloons she had paid for, before fleeing. On her way, she tripped. When another employee, who hadn't seen what happened, tried to help her up, she allegedly smacked him and kept going.

That's about the time the Ladue officer, Crews, came onto the scene. Noble says she spoke to the woman and called an ambulance. But when Crews went to arrest her, the officer managed to get only one cuff on the alleged shoplifter before the woman scuffled with her and scrambled away.

At that point, Noble says, Crews had every right to use her Taser. Instead, the officer mistakenly drew her gun and fired in the heat of the moment, he says.

"She feels terrible," Noble said of the officer. "She's devastated."

Relatives of the woman, who was listed by her initials in court documents, spoke to reporters at the courthouse shortly after Bell announced the charge.

He and other family members say the shooting should never have happened and that the officer was too aggressive, even if she only intended to tase her. But they trust Bell and county prosecutors.

Karen Carter, the woman's mother, says she is praying for her daughter's recovery. "I just want her to get better," she said.

Bell says that he had a newly formed committee, comprising two current and one former judge, review the case before he filed the assault charge. All members of the committee agreed with charging Crews, he said.

In the future, Bell plans to form a standalone unit in the prosecutor's office that will investigate officer-involved shootings and report only to him. That appears to deviate from Bell's campaign pledge to bring in special prosecutors for those types of cases, but he insisted it was consistent with his intent to submit police shootings to an independent review.

Bell praised St. Louis County police for their investigation of the shooting.

In the days that followed, county police said they were reviewing surveillance video from the suburban shopping center. They also distributed images of a second woman and a man, whom they wanted to question. Police say both people accompanied the 33-year-old to Schnucks that afternoon, but neither had been charged with a crime.

The shoplifting allegations are still under investigation, Bell says. 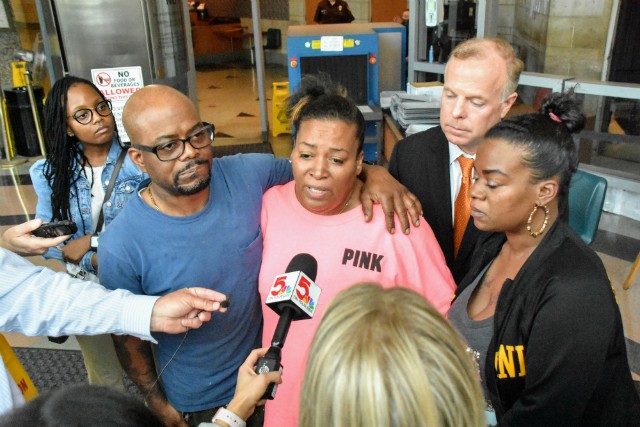