County Executive Steve Stenger has been indicted on three counts of honest services bribery and mail fraud. He has resigned his office.

The St. Louis county executive, a Democrat, faces charges in federal court alleging that he used his official position to enrich himself, by soliciting campaign contributions in exchange for "favorable official action." He then allegedly "took steps to hide, conceal and cover up his illegal conduct and actions, including making false public statements," according to a press release from the U.S. Department of Justice.

Stenger appeared at 1 p.m. at the federal courthouse today for an arraignment, where he pleaded not guilty and was released on his own recognizance. In a letter sent this morning, Stenger said his resignation was "in the best interest of our county and my family."

"The past four years have been some of the most fulfilling years of my professional career," he wrote.

The federal charges focus on Stenger's interactions with John Rallo and his company Cardinal Insurance, which sought contracts with St. Louis County for insurance services in 2015 and 2016. Prosecutors also allege that Stenger "took official action" to get Rallo and Cardinal a consulting contract through the St. Louis Port Authority, for which he did no work, and also helped Rallo and his company Wellston Holdings LLC get options to purchase two properties owned by the county's Land Clearance for Redevelopment Authority.

Finally, the indictment alleges that Stenger took official action to get an unnamed company a state lobbying contract with the St. Louis Economic Development Partnership. That company, which is presumably cooperating with the federal investigation, obtained the contract "in exchange for campaign donations and fundraising activities," according to the U.S. Department of Justice's press release.

Previously county councilman, Stenger took office as county executive in 2015 and was reelected last November after a closely fought race in the Democratic primary against Mark Mantovani. A "draft Mantovani" campaign began to surface in recent weeks.

Assistant U.S. Attorney Hal Goldsmith told reporters that Stenger had been the subject of an extensive undercover investigation that began in early 2018 and continued through the primary and general elections.

It is Department of Justice policy not to "impact, adversely impact or have any impact" on elections, Goldsmith said, and investigators took steps to keep that from happening even as they worked to gather large amounts of information. The case involves "thousands" of text messages and emails, recorded meetings, court-ordered call tracking and cooperating witnesses. In court, Goldsmith described the materials as "voluminous." 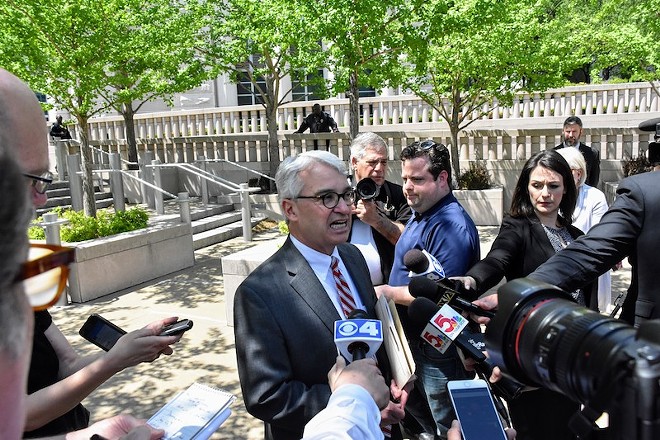 The indictment alleges that Stenger's corruption dates back to before he was even elected county executive. It details a dinner meeting with Rallo on October 23, 2014, at Sam's Steakhouse, in which Rallo complained that he was "tired of giving money to politicians and not getting anything in return."

"Stenger made statements to assure Rallo that, if elected County Executive, he would work to help Rallo get St. Louis County contracts," the indictment says.

In addition to ponying up a $5,000 contribution, the indictment says, Rallo paid for Stenger's dinner that evening. Rallo soon became a member of Stenger's "trustee" program, and along with other members of Wellston Holdings LLC, donated $50,000 to the politician.

After his election, the indictment says, Stenger visited Rallo and asked him to recruit more donors. Rallo asked for Stenger's help getting the employee voluntary benefits insurance contract, then held by another company — something that would net Rallo a $50,000 annual commission. Stenger, the indictment says, began to actively work to steer that work to Rallo.

But when that failed, and county staff went with the incumbent provider, Stenger began to work to get Rallo a consulting contract with the St. Louis Economic Development Partnership to "provide marketing to address the negative publicity leftover from the Ferguson unrest," per the indictment, even though Rallo had no experience in marketing. Rallo told Stenger over drinks at the Ritz-Carlton that getting the contract would "make up for the 'insurance mishap.'"

"Stenger told Rallo that Sheila Sweeney would do what Stenger told her to do," the indictment says.

In a meeting, Sweeney asked Rallo what size contract he wanted. He suggested $350,000. He was told it had to be $100,000 or less to push through without board approval.

The partnership issued a request for proposals. And even though Rallo's proposal was just a page and a half — and even though companies with actual marketing experience also submitted proposals — Rallo's company was given the contract, with Sweeney recommending its selection to the Port Authority board. The amount was set for $100,000 for the first six months, with a second six-month term at the same option.

Adding insult to injury, Sweeney later tacked on another $30,000 to the marketing contract, with this sum earmarked for a Stenger supporter identified only as "JC."

"JC was a close associate of a public official who had helped Stenger get out the vote in the November 2014 County Executive election, and Stenger's direction to hire JC or give JC a contract was payback for that," the indictment says.

"Rallo and Cardinal Consulting did no actual work under the Consulting Agreement," the indictment states flatly. As for JC, he or she "never did any actual work" on the contract either. (At one point, the report Rallo submitted of the work he'd done "was so obviously fake," the indictment says, Sweeney had to advise him to submit a less obviously fake one. She wrote, "The last two read exactly the same and that's not good!")

Under the county charter, Stenger's replacement will be chosen by the seven-member county council. By law, it must be a Democrat since the elected office holder came from that party. The replacement would hold the job until a new election is held in November 2020.

Stenger had originally been chosen to run the combined city-county government envisioned by Better Together, with language that kept him in office even if he was removed from the county executive position. But Better Together's backers changed that provision after facing fierce pushback. Now, should Better Together win approval from state voters, whoever is serving as county executive at the time would join with St. Louis city Mayor Lyda Krewson as transition mayors until voters choose a new leader.

Stenger will have to undergo monitoring by federal agents, remain in Missouri's Eastern District and abstain from drinking as part of the terms of his release.

He left court, accompanied by defense attorney Scott Rosenblum, without saying commenting to about two dozen reporters and photographers who attended the arraignment.

In brief remarks, Rosenblum told reporters Stenger had been in contact with the U.S. Attorney's Office for "quite a while" before the indictment was unsealed.

"Today was not a surprise," he said.

He and Stenger then walked a block to Rosenblum's Bentley SUV, declining to answer further questions before driving away.

Editor's note: This story has been updated with more information from Stenger's court appearance. RFT staff writer Doyle Murphy contributed to the story.