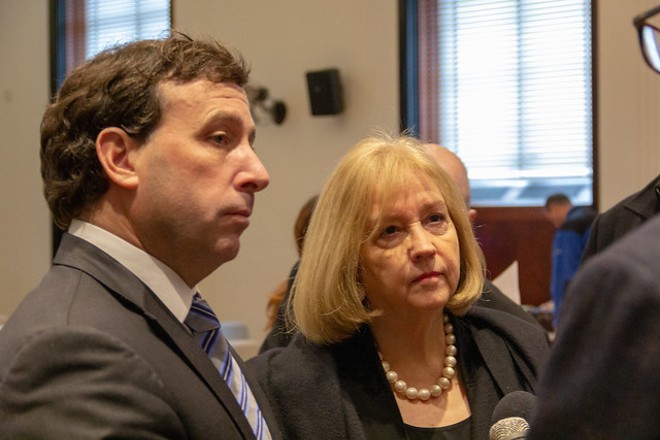 In a bizarre turn of events, it turns out that the St. Louis County Council in February repealed the part of the county code that outlines the path to selecting a replacement for the county executive — and they never adopted language spelling out a new process.

That means the code is officially silent on the matter of how to replace Steve Stenger, who was indicted earlier today.

According to a source familiar with the council's actions, Stenger's absence at meetings earlier this year was making it difficult to fill vacancies as they occurred. So the council officially repealed the language outlining the replacement process on February 22. That leaves them with a code that never deals with how to replace the top executive now that he's been indicted.

(The online Municode library, which serves as a repository for county ordinances and codes, isn't updated in real time — which is why that version of the code is missing this latest update.)

An updated version of the original story follows ....

The St. Louis County Council has suggested that it has no choice but to act tonight to fill the vacancy created by the resignation of County Executive Steve Stenger, whose indictment became public earlier today.

And the part of the county codes suggesting otherwise has been repealed.

The code had outlined a much slower process than the council appears ready to use.

Only at that point, the code stated, should nominations be taken.

Earlier today, the council said it was being forced to act to "ensure continuity of government," dropping plans to wait 'til tomorrow in favor of holding a replacement election tonight. (That's less than 24 hours notice, but hey, how can we possibly get by without a county executive for even one day??? Never mind that Stenger hasn't been coming to meetings for months.)

Here is my statement about tonight’s meeting. We must do everything by the book - no matter what. pic.twitter.com/36weYW6LGm


Up until February, the St. Louis County codes ordered a slower process. Per Section 104.03 (which, again, has since been repealed):

At such next regular meeting, the Chairman, upon reaching the item in the order of business, shall call for nominations for such office or position. Any member of the Council may nominate a person to fill the position or office by stating: "I wish to place in nomination for the position (or office) of _______ the following named person _______." A motion that the nominations are closed shall not be in order at said first regular meeting following the meeting at which the Chairman notifies the Council of the vacancy.

The County Clerk shall place the names of the persons nominated on the order of business for the next succeeding regular meeting, which shall not be less than two (2) weeks following the meeting at which the Chairman notified the Council of the vacancy.

At said next regular meeting, two (2) weeks following the meeting at which the Chairman notifies the Council of the vacancy, the Chairman shall ask if there are further nominations or additional nominations, which shall be made in the same manner as set forth hereinabove. After a reasonable time has elapsed and it appears to the Chairman that there are no further nominations, the Council shall proceed with the election to fill the vacant position or office or may, by majority vote of those present, postpone the election to some later date, which date shall be specified in the motion to postpone the election; provided, however, that said election shall not be postponed for more than two (2) weeks.

What is undisputed: the County Council is tasked with choosing the replacement, and it needs to be a Democrat (since that was Stenger's party).

The rest is timing — and in this one, timing could be everything.

Editor's note: We updated this post about an hour after publishing to explain a major change that was made to the county code in February. Because that repeal was made without new language being added, the code is now silent on how to replace top-level positions.