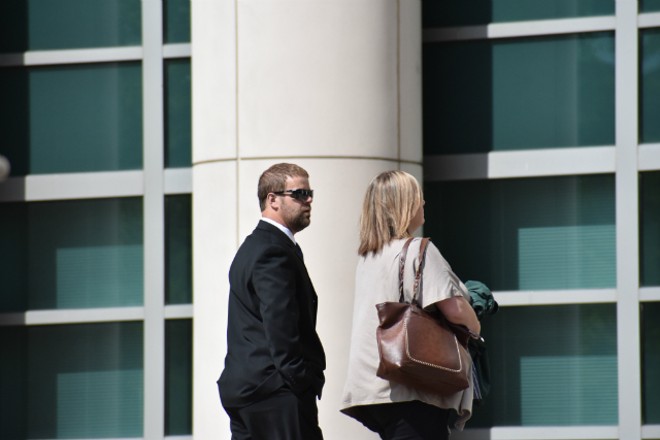 An ex-sheriff in Missouri's Bootheel was sentenced today in federal court to six months in prison, plus four months house arrest, on charges he illegally, routinely tracked phones without a warrant.

Cory Hutcheson, the 35-year-old former sheriff of Mississippi County, appeared this morning in federal court in St. Louis. He pleaded guilty in November 2018 to one count each of identity theft and wire fraud.

Federal prosecutors who handled the case for the U.S. Attorney's Office told the judge in a court filing that the case was "simply one example of his penchant for lawless behavior during his tenure as a law enforcement officer."

He had originally faced 28 charges in a federal indictment related to illegally tracking cell phones of state troopers and a Mississippi County judge.

"Cory Hutcheson is the worst kind of person who could have ever been a law enforcement officer," said Missouri State Highway Patrol Sgt. Jeff Johnson, who testified at this morning's hearing.

He called Hutcheson unethical and a liar, who instead of admitting he had done wrong, tried to "smear the reputation" of legitimate law enforcement officers.

"Twenty six — in one day," Holcomb said, adding that Hutcheson broke rules that every other law enforcement agent has to follow. "This is what separates us, law enforcement, from the criminals."

Federal prosecutors say Hutcheson abused a service called Securus that can give law enforcement officers the GPS coordinates of cell phones, but requires them to have legal permission, such as a search warrant.

Beginning in 2014, when Hutcheson was a deputy, he applied for thousands of searches and illegally accessed hundreds of people's information, prosecutors say. To get around Securus' requirements, he uploaded fake documents that he notarized himself, warrants that had nothing to do with his target and sometimes even random documents.

"Further, the defendant had the audacity to upload entirely irrelevant documents including his health insurance policy, his auto insurance policy, and pages selected from Sheriff training manuals," prosecutors wrote.

This continued for years, even after he was visited by FBI agents, who were suspicious of his searches.

Hutcheson's plea required him to resign from office, which he did in November 2018. The deal also helped him out with the eighteen charges, including robbery, filed against him in state court by the Missouri Attorney General. All those charges, except a misdemeanor for breaking laws governing notaries, are being dismissed as part of his guilty plea.

A pregnant inmate's baby was stillborn in 2014 while Hutcheson was the supervisor of the Mississippi County Detention Center. His staff ignored the inmate's pleas for medical help for four days, according to a suit filed by the American Civil Liberties Union. Hutcheson finally allowed the woman, Tara Rhodes, to be shipped off to a state prison on the fifth day. By the time she arrived and was seen by a doctor, the doomed baby's blackened foot was protruding from the woman, the suit alleges.

In 2015, a young mother named Somer Nunnally died of an overdose on the floor of the jail. Her family sued — and later settled for $270,000 — citing video that showed jail staffers laughing and mocking Nunnally during the final hours of her life.

Hutcheson was already under investigation by the FBI for the phone tracing at the time, a probe that would lead to state and federal charges in the coming years. Agents seized his computer in 2014, the former sheriff previously told the RFT. Ex-sheriff Keith Moore told us that he had been informed by the FBI that Hutcheson was illegally surveilling phones, including Moore's.

Moore said he spoke to Hutcheson, but ultimately didn't have enough to fire him because there were no criminal charges at the time. He did ultimately terminate the crooked young deputy, after Hutcheson's loyalists walked out of the jail, ostensibly to protest dangerous conditions.

Hutcheson had already announced plans to run against Moore for sheriff and claimed his firing was political retribution. Moore says Hutcheson "terminated himself" when the jail was left unattended.

The election that followed was predictably nasty, and Hutcheson came out on top by promising to get tough on drug dealers who plagued the rural county.

He took office in January 2017. In his first four months in the job, Hutcheson and his deputies made nearly 90 drug arrests, publicly taunting dealers and addicts on Facebook and in an endless stream of news stories. 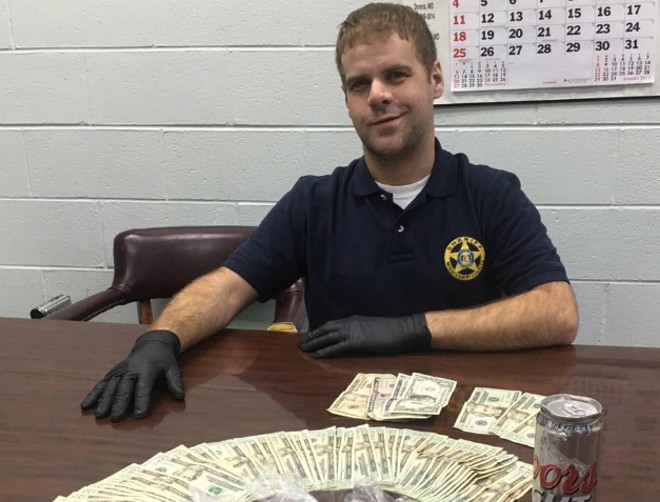 "The defendant's conduct has resulted in dismissal of dozens of cases brought based on information he obtained illegally in an abuse of many suspects' constitutional right," prosecutors wrote.

In April 2017, Hutcheson was arrested by state police. Fifteen of the eighteen state charges were related to tracking phones. The other three were for allegedly strong-arming a pair of elderly hairdressers who were in the midst of a dispute with one of their former employees — Hutcheson's sister-in-law.

The salon owners — two sisters in the mid- to upper-70s — believed the 23-year-old had stolen their appointment book on her way out the door and were holding her paycheck until it was returned. Hutcheson was accused of handcuffing the older of the two sisters and forcibly taking the check. The woman suffered a heart attack following the confrontation.

Hutcheson then filed charges of kidnapping against the elderly salon owner. Then-Attorney General Josh Hawley charged the sheriff with robbery, assault and filing a false declaration.

Those charges were dismissed as a part of the plea agreement in the federal case. In a statement following his plea in 2018, Hutcheson maintained he wasn't guilty of robbing or roughing up the salon owner. He characterized the phone tracking, which federal prosecutors say went on for more than two years, as a lapse in judgement.

Following his arrest in the state case, Hutcheson's peace officer's license was suspended, but he continued to serve as sheriff. His role was supposed to be purely administrative at that point, but the family of a mentally ill man claims he played a key role in the man's death.

See also: Tory Sanders Made a Wrong Turn into Missouri. He Never Made It Out

Tory Sanders had landed in Mississippi jail after getting lost and turning himself in, believing he had a warrant in his home state of Tennessee. Over the following hours, he clashed with jail staff and was tased repeatedly. In a lawsuit, his family alleges Hutcheson ultimately led a team of jailers and other law enforcement into Sanders' cell, tackling and beating him, leading to Sanders' death.

Former Attorney General Josh Hawley investigated the death but ultimately concluded there was not enough evidence to charge the sheriff or anyone else with murder.

In court this morning, defense attorney Scott Rosenblum described Hutcheson as a "good man" who successfully battled the scourge of drugs in his home county.

Rosenblum asked U.S. District Judge John Ross to sentence Hutcheson to probation so that he could stay with his daughter and wife, who has been left reeling by the death of child shortly after childbirth followed by a string of miscarriages.

"His family's very existence depends on that," Rosenblum told the judge.

He claimed Hutcheson's role in the jail deaths was minimal at best and attacked the credibility of the two highway patrol sergeants who testified against the former sheriff during the hearing.

Rosenblum claimed text messages proved Johnson had asked him to trace a phone for him. Holcomb's number was in the cell phone of a drug suspect, and the master sergeant checked in to see what was going on after that suspect's information was run through a criminal database, Rosenblum said.

"To me, when you come up here and make righteous statements you better have your house in order," Rosenblum said.

Assistant U.S. Attorney Gwendolyn Carroll reacted sharply to those comments, insisting Johnson had assumed Hutcheson would make a lawful search in an investigation and that Holcomb was properly following up on a confidential informant.

"These officers' houses are in order," Carroll said.

She said the tragedies of Hutcheson family life are significant but pointed out that he had significant resources, including a large number of relatives who attended the hearing. And she undercut his crusade against drug dealers.

"It is easy to affect arrests, to affect prosecutions when you're ignoring the constitution," she said.

Hutcheson apologized to the troopers and his family in a short statement.

As for Judge Ross, he said that while there were "some bad things happening in Mississippi County" it wasn't clear how much of the responsible for the jail deaths should fall on Hutcheson.

He said it also seemed like the former sheriff was an important part of his family. But he said that any public official who abuses their position needed to face "significant" consequences, which includes prison time in Hutcheson's case.

He ultimately settled on a sentence below the recommended guidelines of ten to sixteen months in prison. Along with the six months in prison and four months of home confinement, he ordered Hutcheson to undergo three years post-release supervision.