A 900-Pound Adam Wainwright Is Heading to China. St. Louis Just Got a Look 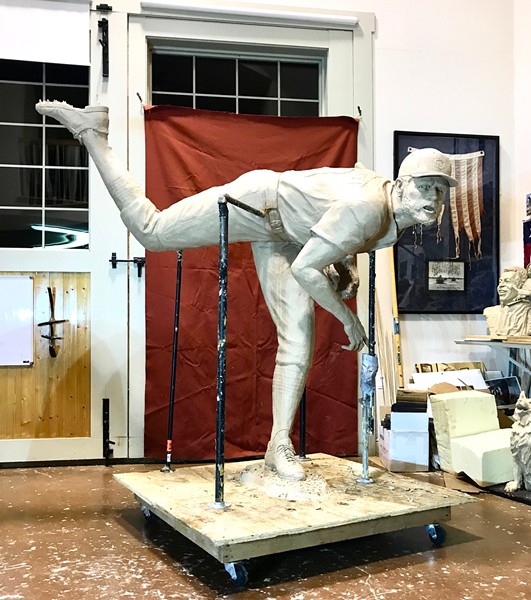 Over the weekend visitors from Nanjing, China, got to see the statue of Adam Wainwright headed to their city, as well as the one of the batter who will stay  in St. Louis and try to hit Waino’s pitch.

As the RFT first wrote about last year, as part of the 40th anniversary of the sister-city relationship between St. Louis and Nanjing, artist Harry Weber was commissioned to sculpt two statues: one of Wainwright, set to be installed outside the Youth Olympic Stadium in Nanjing; the other of a Nanjing batter, which will stay here in St. Louis.

This past weekend a delegation from Nanjing that included the city’s Vice Mayor Yang Xuepeng was in town to celebrate the anniversary. Members met with Lyda Krewson, visited the Arch and gifted the Missouri Botanical Garden a pair of bronze Ming chairs. At a Missouri Athletic Club luncheon they mingled with St. Louisans, and there the crowd got a look at photos of the Wainwright statue in clay form as well as photos of the Nanjing batter.

“Baseball is an American thing. And more specifically a St. Louis thing,” said Neal Perryman, board chairman of the St. Louis-Nanjing Sister City Committee. He said he hoped kids in Nanjing would walk by the statue, be curious about it, and end up learning more about the country and the city where it came from.

The Nanjing batter will wear the number 40 on the back of his jersey with Nanjing written across the front. 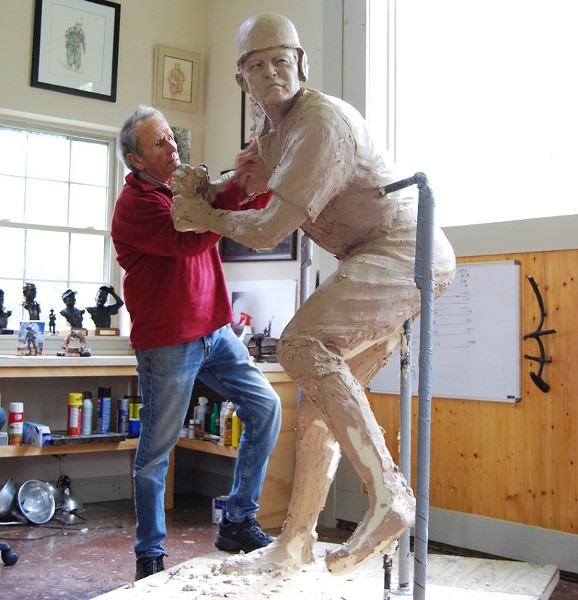 Liu Gang, a Nanjing University graduate student now attending UMSL’s IMBA program, took part in the weekend’s festivities. The two statues, he said, make for “a really good symbol. Across the world the two players are playing together. It represents the connection between the two cities.”

Harry Weber is the sculptor behind the Lewis and Clark statues on the riverfront and the bull in front of the Stifel Nicholas building downtown, as well as installations across the world.

“The Wainwright follow-through is beautiful,” Weber said. “It’s like a ballet step. At this point in his pitch the ball would be about halfway to the plate. The Nanjing hitter is in his stance, cocked and ready. They will be separated by over 7,000 miles but it’s as if they are just 60 feet apart."

Installing two statues 7,000 miles apart was the brain child of Tim Hermann, CEO and board chairman of construction outfit Collins and Hermann. He’s a native St. Louisan who now spends much of his time in China.

Molds have already been made from the original clay sculpture made by Weber, and wax impressions from those molds have been sent to As Astra foundry in Lawrence Kansas for casting. The resulting pieces of bronze will be welded back together by VMD Sculpting in St. Louis, forming a version of the Cardinals pitcher that is about 900 pounds, 110 percent life size and seven feet from toe to head. The Nanjing batter will be of comparable size, though Weber still has six to eight weeks of sculpting it before it will be ready to be cast.

The bronze Wainwright will be installed in Nanjing in time for an official unveiling ceremony in October, which will coincide with a visit to Nanjing by delegation of St. Louisans. The Nanjing batter will be installed late this year or early 2020, either be outside Busch Stadium or in Ballpark Village.