Loop Trolley Gives Up, Gets a Tow Back Home 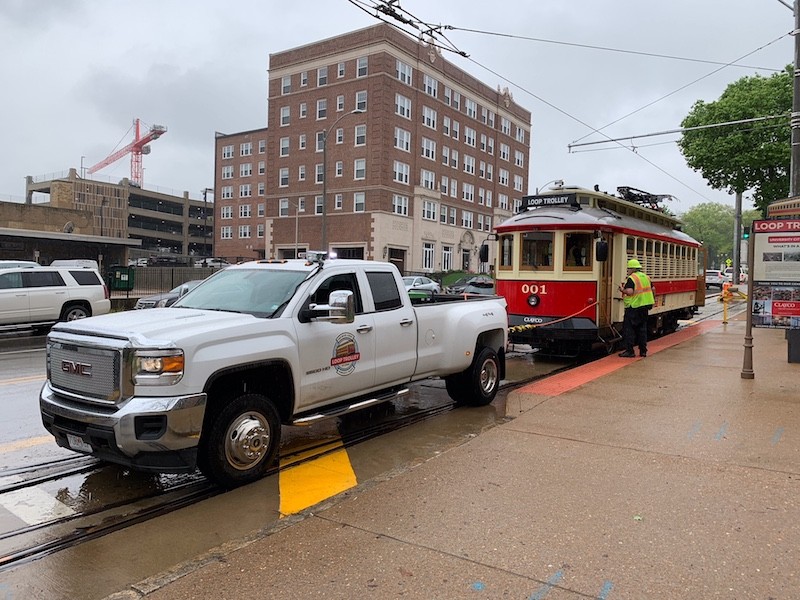 The Loop trolley stalled out today during the lunch hour Thursday — requiring a tow back to headquarters.

The hapless choo choo apparently quit around 12:20 p.m. Onlookers sent us photos of the clunker being towed from the west end of the Delmar Loop, across from Commerce Bank.

Loop Trolley Co. Executive Director Kevin Barbeau said the trolley had suffered a "temporary issue" and would be looked at back at its maintenance shed on Delmar. Until then, the Loop Trolley Co. is dropping back to single car service for the day.

The streetcars aren't as old-timey as they look; they were actually built in the 1990s in Portland and later converted for the Loop Trolley Co.'s use. Still, they've been plagued by issues since service first began in November, beginning with the delay of the official opening after a freak snowstorm and continuing through a series of accidents involving cars both parked and un-, largely on a particularly tight stretch of Delmar near the Pageant.

Those mishaps have forced the Trolley Co. to cut back on service while repairs can be made, which will again be the case today. A third trolley car arrived earlier this year, but it's still in the process of testing, Barbeau said.

Barbeau said prospective riders should check out the trolley's website for further updates.