Dennis J. Wilson, known to many from his prolific byline of DJ Wilson, died Saturday. His passing from the complications of a long battle with brain cancer came just days after his 67th birthday.

Wilson was a staff writer at the Riverfront Times from 1995 to 2002, serving as a reporter at large and metro columnist. While he could write on almost any topic, his knack was in unknotting the arcane aspects of our region’s civic culture, often tweaking those in the power class with his wry humor and love of the underdog.

The RFT gig brought him back to his native St. Louis after reporting stints in Waynesville, Missouri; Houma, Louisiana; and Houston, Texas. He and his wife Cole arrived in town with four children, a number that would quickly double. Those eight kids would become adults as part of a huge cast of extended family members, including a growing batch of oft-loving, sometimes-squabbling cousins, nephews, nieces, in-laws, couch crashers and family members by choice.

A friend count for Wilson would be impossible to calculate. On the list were people who’d been in his life since grade school. Several of his closest friends were made at Bishop DuBourg High School in the late 1960s. Other friendships were established at his various writing outposts. He met folks in bars, courthouses, gymnasiums, libraries ... or by simply running into them on the street, with Wilson bringing to life the old adage of someone able to carry on a conversation with a fencepost.

This ability served him well as a reporter and interviewer. Even if he zinged a source in print one week, it wouldn’t be odd for Wilson to tip a lukewarm cup of Bud Select with the same person at a fish fry the next. For years after his RFT stint, he wrote about politics for St. Louis Magazine, even while serving in a communications position for the East-West Gateway Council of Governments, a role that gave him a unique insider-outsider perspective. He explored many of the same topics on the KDHX radio show-turned-podcast Collateral Damage, a program he was dedicated to, continuing to record throughout his illness. The program allowed him to meander through his unique thicket of interests; guests always knew they were in for a broadcast experience different than most.

A storyteller as much as anything, Wilson honed his material through repetition, talking through his best material with gusto, whether it was the 92nd or 256th retelling, often to the same audience. The topics were many and varied, though his subjects most frequently ran to family, sports, politics and St. Louis generally. His mind was best displayed at the annual St. Frances Cabrini Academy Trivia Night, where he emceed the action and gave some of his gags (Q: “What’s the capital of Djibouti?” A: “Djibouti”) a yearly airing.

He was also a collector of things. Documents were among his most beloved possessions. His cubes and offices were a testimony to the power of paper, with boxes and folders and teetering stacks that were semi-legendary for their, let’s call it, comprehensiveness. He’d root through these collections and generally could find exactly the source material he’d been hunting for; though he met his deadlines, they were usually last-second filings, slowed by good, long conversations in the hallway. 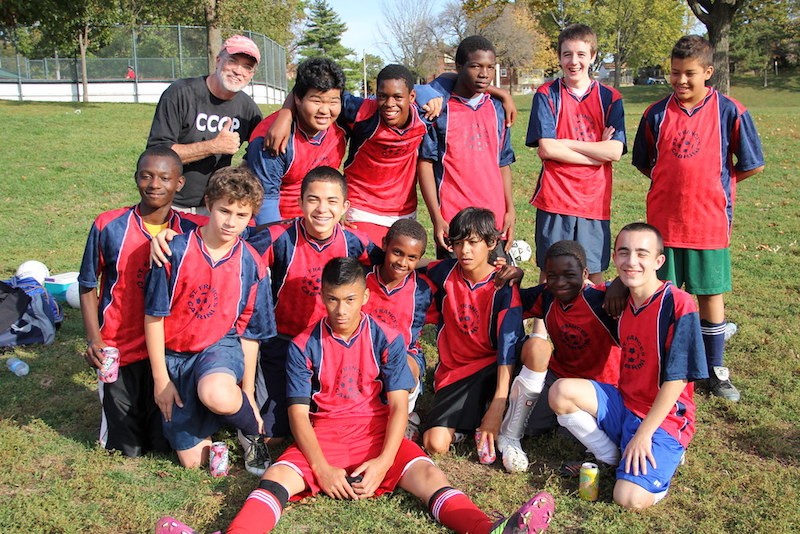 Coaching was a common topic. As his children/grandchildren aged through the CYC youth sports system, Wilson was a constant presence as both official and unofficial coach (and he was generous with opinions regardless). His mentoring of kids wasn’t limited to game time. Over many sports seasons, a familiar sight at south city QuikTrips was DJ Wilson in a weathered Volvo station wagon, a rambunctious, multi-hued batch of soda-greedy children tumbling out of every door, including the trunk. Some of these kids, arriving in St. Louis from around the world, would become de facto family members, their presence a constant at the Wilson family’s three-story home on Arsenal.

For well over a decade, he hosted Wednesday Night Basketball there. Some people made memorable cameos and never returned. Others were weekly attendees, joining Wilson’s children and childhood friends in games that brought together the full spectrum of humanity, with judges, politicians, workers at nearby restaurants, academics and a slew of journalists sharing the court. Players of all ages, heights, skills, ethnicities, genders and sexualities hooped with abandon on that three-car parking pad. In between games, Wilson would be courtside, listening to KMOX, constantly adjusting his knee brace, shelling peanuts and humble-bragging about the latest beer deal he’d scored at Globe Drug. The scene was funny and profane, and probably too loud for his neighbors.

As a human being, DJ Wilson was more of a puzzle than some, if not most. He was the smartest guy in the room (like: literally, he was) and big-hearted, too. Cantankerous and caring, a hopeful cynic. Giving of his time and last penny, but able to spear you with his round-the-clock texting habit; woe be you if your favorite team lost a big game, as you’d be gifted that acerbic, 3 a.m. zinger from DJ Wilson! And he was patterned, no doubt stubborn in certain ways.

Which brings us back to basketball.

His patented move started near the wood fencing at his home court’s right corner. With a high leg-kick, he’d drive baseline to the basket. From here, one of two things would happen. Option A: he’d sizzle a hard pass through a forest of arms (and skulls) into the hands of a startled teammate. Option B: he’d continue his drive, flipping up a li’l dipsy-do of a scoop shot, mixing in the occasional half-hook. Everyone on that compressed court saw those drives coming, but this stubborn baller persisted. And he still made his share of shots.

At some point around 1 a.m., the night-owl host would finally bid adieu to the last visitor with one of his trademark phrases: “hail and farewell,” he’d say, the message usually repeated back to him. “Hail and farewell, D.”