It was something new for Darlene Green, the usually stoic St. Louis city comptroller. She wanted everyone in the room to know it.

"This is a first, I want that on the record," Green declared to Tuesday's meeting of the Board of Estimate and Apportionment, often abbreviated as E&A. The board's three voting members — Green, Mayor Lyda Krewson and Board of Aldermen President Lewis Reed — spent twenty minutes in a rolling argument over an airport bond issue.

Green, who was pushing for the issuance, says it could save the city $20 million. And she later angrily charged that Krewson and Reed were holding it up at the behest of consultants pushing for airport privatization. (The two denied that.)

That the bond issuance could save the city millions was undisputed, even by Reed, who bickered with Green both over scheduling (he wanted to delay the vote) and his supposed desire to personally read the 106-page bill.

The proposal seeks to refund bonds issued in 2009, while also issuing new bonds valued around $24 million. But to get the $20 million savings touted by Green and her financial advisors, the city would need to finalize the deal by July 1.

The proposal has been in the works for months. Green pointedly noted to Krewson and Reed that their offices had bombarded her staff with questions. And yet, on the day the comptroller expected the measure to pass, Reed and Krewson slammed on the brakes.

Reed protested, responding that the bill was already locked into an aldermanic schedule, and that a week's delay at the Board of E&A wouldn't prevent it from passing.

"I have not had a chance to look at this 100-page bill," Reed at one point, but then added, "I think it is a great idea and I want to support it."

Reed didn't raise any questions about the actual details of the bond measure during the meeting. Krewson, meanwhile, lobbed questions at one of Green's financial advisers as he summarized the financing package.

Critical to the deal, explained Ramon Ortega of Siebert Cisneros Shank & Co., is that the refinancing of the bonds be done before the "call date" — that is, the date where a bond can be refunded before it reaches maturity. That allows the bond issuer, in this case St. Louis, to refinance at a lower rate.

"The issue with issuing a refund after July 1, is it becomes a diminishing asset," Ortega warned. "You actually lose savings because you’re losing the market that you could have pulled the trigger on."

But when Krewson interjected to ask about the difference in interest rates — "So the new payment will be more than the payment we’re making now?" — the answer, an emphatic "No," came from both Ortega and from St. Louis airport director Rhonda Hamm-Niebruegge, who was seated behind him.

That didn't seem to happen. Instead, the matter circled between the mayor's struggle to understand the details, Reed's insistence that delaying the E&A vote wouldn't harm the proposal, and Green's insistence that, yes, it absolutely would. 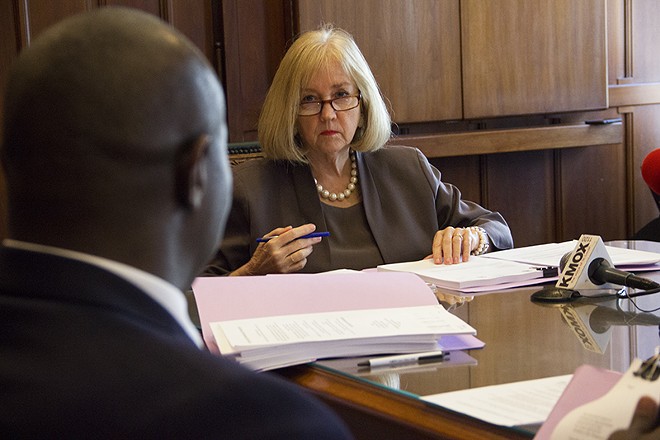 "You are saying there is no way you’re going to approve this today," Green said. "I hear you. But the level of scrutiny that you've shown is unacceptable to me. You need to hear that loud and clear today. And you need to hear it from me."

Green's frustration wasn't only focused on Reed's demands for a delay, or that basic details about the proposal were apparently misunderstood by the mayor and her staff. It was about Green's role as the city's chief financial officer.

"I need you to understand that the power of the comptroller’s office to do this financing is there, and we have come prepared," Green said. "The [city] charter has given me charter responsibilities, that you’ve decided to remove. Do what you want. I’m done."

After about 25 minutes, the board voted 2-1 to delay the vote Two hours later, the comptroller's office released a scathing press release, accusing both the Mayor and Board President of blocking the measure, "despite the obvious advantages to pursuing refunding."

"It is fiscally irresponsible for Krewson and Reed to attempt to derail a financial transaction that will produce a savings in excess of $20 million dollars,” Green said in the press release.

I was stunned today that Mayor Krewson and Board President Reed would block a vote to save St. Louis Lambert Airport in excess of $20 million. It's fiscally irresponsible. https://t.co/F1lAP9tiPc


It's not the first time the issue of the airport has riven the Board of E&A. At a meeting last May, Krewson was left sputtering when Reed abruptly derailed a vote to approve hiring consultants tasked with exploring the unprecedented option of leasing operations at St. Louis Lambert International Airport.

Green has been a staunch critic of privatization efforts. Last year, when Reed flipped his position, approving the privatization consultants — coincidentally, after a number of Reed's campaign contributors were added to the rolls — the comptroller voted no and again found herself on the lonely side of a 2-1 vote.

More recently, in February, Green criticized the lack of public vote on the privatization issue, calling it "arrogance."

Even in Tuesday's contested bond measure, the issue of airport privatization lurked just beneath the surface. That's because Green's office and its financial advisers are planning for every possible scenario, including that Lambert will be leased to a private entity in the near future.

According to executive summary produced by Siebert Cisneros Shank, the proposed bond package includes a provision that would allow the city to pay off, or "defease," the 2019 bond if the airport is privatized.

In remarks to the mayor, the firm's analyst Ortega explained that if the city did decide to lease the airport, "should they need to pull the trigger on this transaction to defease the bonds, it will be minimal or no cost to the city, or a similar cost to leaving the bonds outstanding."

That's an important point for any entity considering privatization. If someone does make Lambert the largest privately run airport in U.S., the purchase price wouldn't simply drop into the city's general revenue fund, but would first be used to pay of the airport's approximately $600 million in debt, which includes the cost of defeasing the millions wrapped up in various airport bond measures.

What Ortega described was an attempt to cover multiple positions at once, making sure neither outcome — privatization or status quo — would leave the airport in worse shape than it is presently.

"To the city," Ortega continued, the possibilities "should be somewhat neutral, while also balancing doing what’s best for the airport, and locking in those savings in a favorable market environment."

If you've made it this far, it shouldn't be surprising that anyone, even Krewson and Reed, had trouble following the financial details. But those details, Green insisted, were the product of her office's expertise and the help of professional consultants like Ortega.

The intrusion onto the turf of the comptroller's office clearly incensed Green. During the meeting, she said Krewson and Reed trying to intercede because they didn't understand the details amounted to an attempt to "belittle the power" of her office.

After the meeting, Green directly accused the two officials of tanking the bond proposal to make the airport a more attractive candidate for privatization.

"They are attempting to make the operations of the airport look less than professional, less than capable, so a privatization in their eyes would make more sense,” Green told the St. Louis Post-Dispatch after the meeting. "It is unconscionable."

And to activists who oppose airport privatization — in part because the entire process, including the city's consultants, is being underwritten by libertarian billionaire financier Rex Sinquefield — Tuesday's atypical standoff was yet another example of how that the game is stacked.

"How far will they go to force privatization of our airport?" queried the activist group Not For Sale STL in a Facebook post Tuesday afternoon. The comptroller's post was also shared by 15th Ward Alderwoman Megan Green, who recently opposed Reed for reelection on a platform that vowed to stop the airport from going private.

In her own Facebook post, Alderwoman Green suggested that the E&A meeting revealed the real tactics of the privatization conspiracy: weaken the airport's financial position, thus making it easier to sell.

Or in other words: "Starve the beast, force privatization."