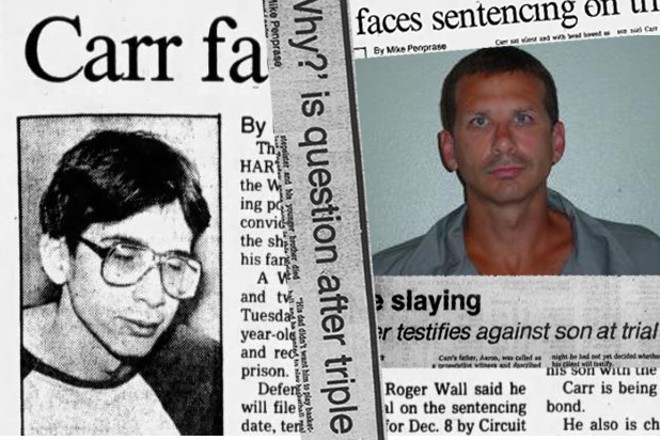 A convicted murderer who spent his entire adult life in Missouri prisons has been granted parole and a release date next year. For Jason Carr, 52, that means leaving prison 36 years after a Wright County jury found him guilty of killing his brother, stepmother and stepsister in 1983.

The parole board's decision comes after more than six years of work by Carr's team of public defenders, who based their arguments on a U.S. Supreme Court case that forbade courts from giving juveniles mandatory life sentences without the possibility of parole.

"It's been an emotional rollercoaster," Carr says by phone from the Southeast Correctional Center in Charleston, Missouri. "It's hard to explain. You go from, pretty much you’re gonna be in prison for the rest of your life, to there being hope."

That hope first sprung in 2012, when the U.S. Supreme Court ruled in Miller v Alabama that even juveniles convicted of the worst crimes had constitutional protection against cruel and unusual punishment. It was an historic moment for the country's highest court, which finally acknowledged that a juvenile's still-developing brain functions differently than an adult's. Youthful criminals, the court stated, deserve to have their age and childhood circumstances evaluated as part of their sentence — not simply left to die in prison without ever getting the opportunity to face a parole board.

Citing Miller, the Missouri Supreme Court ruled in 2017 that Carr's rights had indeed been violated. Writing for the 5-1 majority, Justice Patricia Breckenridge noted that Carr "was sentenced without the jury or the judge considering the mitigating factors of his youth, the attendant characteristics of youth, the circumstances of the offense, or his potential for rehabilitation."

Instead, Carr's fate was determined by the mandatory sentencing laws on the books in 1983. His jury took just 50 minutes to find the teenager guilty of three counts of capital murder, a charge that carried only two possible sentences: the death penalty, or life without the possibility of parole for at least 50 years.

Carr's crimes horrified the tiny Missouri town of Hartville, which is about 60 miles east of Springfield. However, prosecutors in Wright County declined to seek the death penalty against the teen.

At trial, the defense's case turned on Carr's relationship to his father, a devout Jehovah's Witness who reportedly prohibited his son from playing basketball or dating outside the family's faith. According to a summary of the case contained in the Missouri Supreme Court decision, Carr and his father had attended a worship service on March 14, 1983, during which the father "rebuked and ridiculed" his son for "failing to recite a Biblical passage."

The teen had also intended to kill his father, but the rifle misfired. After Carr's father wrestled the weapon away from his son, the boy reportedly admitted, "I killed them all."

At trial, Carr's public defender did not attempt to argue his client's innocence. After a judge rejected an insanity defense, Carr's attorney asked the jury to spare his client from execution. However, the only alternative sentence was little better. It meant Carr would have to serve 50 years in prison before becoming eligible for parole.

"I wish this had never happened. I wish that I would have died before it happened," he responds.

Death would have also saved him from life in prison; Carr recalls being shipped immediately to the "supermax" facility in Jefferson City, "the worst part of the prison right from the get-go."

"It was really violent when I first went to prison," he adds. "For young guys, it was really bad."

Even after the U.S. Supreme Court's 2012 decision in Miller, it still took years for Carr to get a definitive ruling. In 2016, the Missouri Attorney General's Office argued that Miller did not apply, since Carr's original sentence came with the possibility for parole, albeit a very distant one, in 2033.

By that later date, however, Carr would be 67 years old, "the functional equivalent of life without parole," his lawyers argued. When the Missouri Supreme Court sided with Carr in 2017, it ordered Wright County to convene a new jury for a sentencing hearing, which would provide Carr the constitutional protection that he'd been denied as a teenager.

However, that sentencing hearing never happened.

"We were able to work out a disposition with the prosecutor's office in advance," explains public defender David Kenyon.

Still, given a hearing, Carr would have had plenty of mitigating information to present, Kenyon adds.

"The info that we would had presented would have been really, really persuasive to a jury," Kenyon says. "We had stacks of people, prison workers who were going to come in and talk about, basically, that the Jason they know isn't a killer. We had a warden who was willing to testify that [Carr] is the first inmate where he could honestly say that if he was released from prison and moved next door to him, he wouldn’t have a concern in the world."

Instead, under the deal arranged with prosecutors, Carr pleaded guilty all over again last September — this time, however, instead of three concurrent life sentences for capital murder, he pleaded guilty to three counts of murder in the second degree. The new charges meant new parole math: Under the 1983 criminal statutes, second-degree murder carried a 50-year sentence with the possibility of parole. Carr's 30-plus years in prison suddenly made him eligible for a parole hearing.

In January, Carr got that hearing, and a few weeks later the board returned its decision: release. In an email, Missouri Department of Corrections spokesman Gary Brix confirmed that Carr is scheduled to leave prison on March 10, 2020.

"I was just kind of numb," Carr says, recalling the moment after getting news of the board's decision. "Everybody was congratulating me. It just felt really weird, to be honest. It’s like, it’s not real. You don’t expect to get out."

There are still hurdles remaining before Carr can rejoin society. He's currently enrolled in a reentry program, and he's meeting with both an occupational therapist and a reentry caseworker affiliated with Saint Louis University. But that preparation only goes so far. He worries about what kind of world will greet him after 36 years away. He's never used the internet or a cell phone.

He already has some plans, though.

"It might sound corny, but I’d like to grow a garden, a real garden," he says. "I’d like to sleep in a bed big enough for me, and to eat real food."