The 'St. Louis-Style' Bagel Slice Is Now Our National Shame 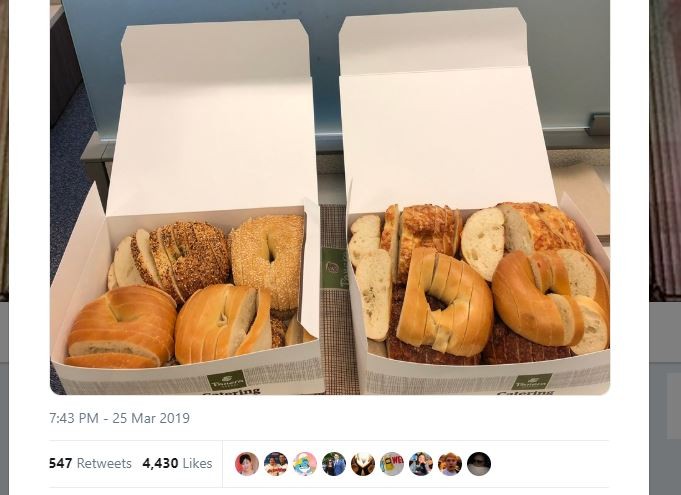 It's all over. St. Louis' charade as a city on the rise has been exposed as fraud by the revelation that Saint Louis Bread Company slices its bagels like bread loaves, in defiance of God's will and all that is decent.

Our ongoing national shame was exposed by a Tweet, of course — Alek Krautmann, whose Facebook page lists him as a Webster Groves native, posted a photo Monday morning with the caption, "Today I introduced my coworkers to the St Louis secret of ordering bagels bread sliced. It was a hit!"

Today I introduced my coworkers to the St Louis secret of ordering bagels bread sliced. It was a hit! pic.twitter.com/XNGbljtpYz


It was not a hit. Rather, the collective minds of America came together and lost their bagel-loving shit.

I believe this is a Class A felony in New York City. And if its not, it should be. https://t.co/ngbbPFvnya

You come to me, and you say: "Don Corleone, slice my bagel." But you don't ask with respect. You don't offer friendship. You don't even think to call me Godfather. Instead, you come into my house on the day my daughter is to be married, and you ask me to murder this bagel.

I work in a bakery that makes bread & bagels every morning.... If someone asked me to "bread slice" bagels I'd refuse service. I have standards and a healthy respect for bagels.


Some took the sliced bagel as a direct referendum on St. Louis, condemning our fair city for the perceived atrocities committed by Panera, as Saint Louis Bread Co. is known in cities where bagels are sliced properly. Others, themselves St. Louisans, claimed never to have heard of the practice. (Gotta feign normalcy to the eyes of the outside world, right?)

St Louis bread-slicing their bagels is more like "hiding a crime" than "keeping a secret" https://t.co/bocgKjpeoc

If any of you actually do this, please leave our fair city and never return. I've never heard of this "St. Louis secret" and I'm offended on all of our behalf. https://t.co/vxWnxGX83v

I went to St. Louis once and I don't remember it being a dystopian nightmare? https://t.co/AxLXRZJ2fk

this and all other "st louis secrets" should be transported directly to the nearest landfill https://t.co/PrUPD5j9Qg

Today I introduced my coworkers to the St Louis PBJ pic.twitter.com/yEkBusJx6G


Some St. Louisans weighed in, not to defend the practice, but rather to express their shock at the horror living in their midst.

Of course, there was denial.

1. This is not a STL thing 2. Who The F wants a slice of bagel for breakfast? 3. Your co workers are psychopaths if this was a hit. pic.twitter.com/KEWjcLKq8Q

Even Panera itself stepped into the ring — not to defend itself, but to acknowledge the division that its slicing style had created. Even our own Bread Co., it seems, could not stare into the abyss of its creation without asking itself, "What horrors have we wrought?"

Our team is divided over here. Do other people slice their bagel Bread Co style? https://t.co/NbdZjj6G6C


Hey, there is some good news here: For his trouble, Krautmann is getting free bagels from Panera, "sliced however you'd like." To which we say: Alek, for the love of all that is good, spare your coworkers and slice them like a human. Our national reputation depends on it.

Hey Alek, next time bagels are on us, sliced however you'd like. 😉 Can you DM us?