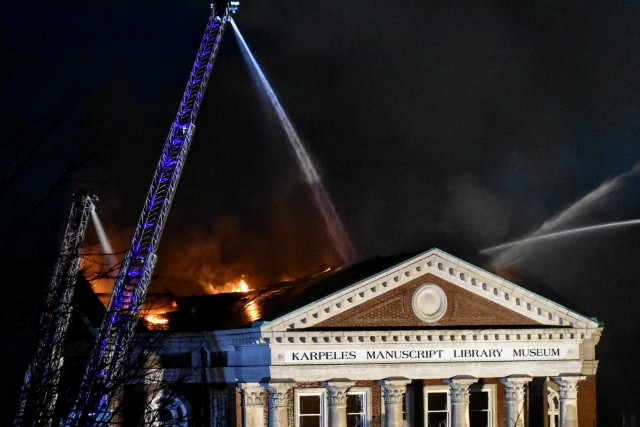 A raging fire at the Karpeles Manuscript Library Museum in south city raced up the back of the building on Tuesday night as firefighters scrambled to save the rare documents inside.

Fire Chief Dennis Jenkerson says the blaze eventually brought down the second-floor ceiling, forcing his crews to evacuate and battle the fire from the outside. As they backed out of the building, commanders had firefighters grab whatever documents and artifacts they could and take them outside.

"We've got serious damage in there," Jenkerson told reporters gathered across the street.

The original call was about 7 p.m., and the first firefighters on scene immediately sounded a second alarm because of the size of the building. It was soon followed by a third alarm and then a fourth, bringing about 80 firefighters to the 3500 block of Russell Boulevard, just east of South Grand Boulevard in the Compton Heights neighborhood.

Flames were still occasionally popping through the roof two hours later, but Jenkerson said the bulk of the fire was under control.

The museum is one of fourteen Karpeles sites across the country, cycling the world's largest private collection of rare manuscripts and documents from one branch to another. St. Louis Public Radio detailed the history of the south city location in 2016.

The fire could be seen for blocks, and crowds gathered across Russell in the Compton Hill Reservoir Park as smoke filled the neighborhood. It was not immediately clear what caused the fire or where it started in the building. That was still under investigation on Tuesday night.

Jenkerson says the exhibits were chiefly on the first floor and most of the damage was on other floors. He says firefighters tried to aim water away from the exhibits when they could, and they take as many items as possible before they exited.

"They knew they were in a museum," Jenkerson says. "It's like, 'Don't leave empty handed. Grab something and get it out of here.'" 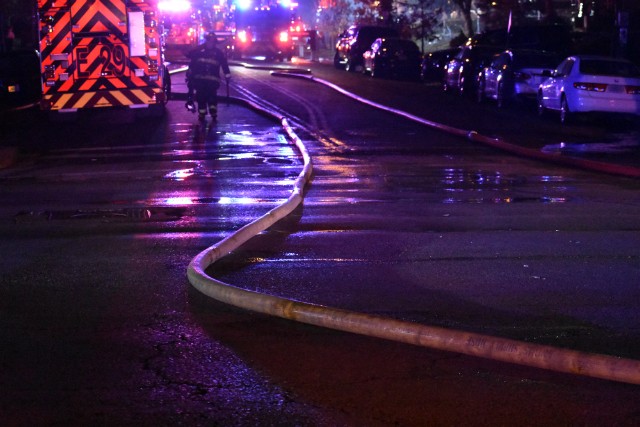