On Saturday, the St. Louis County Republican Party honored disgraced Arizona sheriff Joe Arpaio at its annual Lincoln-Reagan Day Dinner. Once lauded as "America's toughest sheriff," Arpaio was found guilty of criminal contempt of court less than two years ago and only spared sentencing by a presidential pardon.

During his tenure as sheriff in Maricopa County, Arizona, Arpaio was found to violate civil rights law to round up people who looked Latino, regardless of whether there was any "reasonable suspicion" they'd committed a crime. All that (and much, much more) might be good grounds to limit the honors from a party aiming for broad appeal.

Yet the St. Louis County GOP didn't just welcome Arpaio. They feted him at an event featuring tables adorned with tiny brick walls, symbolizing the wall that Arpaio's presidential benefactor wants to erect on the Mexican border.

There were no walls separating the gala from the protesters outside, yet the mood (and crowd composition) were remarkably different.

Inside, attendees at paid $100 a ticket to hear Arpaio repeat debunked claims about Barack Obama's birth certificate. Outside, protesters hung a banner printed the words "Racist Bullshit" and an arrow pointing toward the venue.

The protesters also hung a second sign from a nearby electrical tower. This one showed an illustration Trump as a dollop of poop, captioned "Racism Reeks." 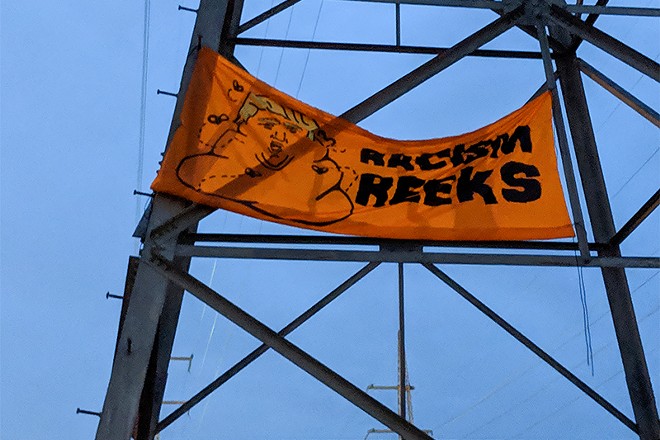 The protesters temporarily blocked the road leading to the south county venue Orlando's. Photos taken at the scene by journalist Richard Reilly show the demonstrators used plastic barrels to obstruct the roadway.

By 7 p.m., the small group of protesters had moved to the grassy area by the entrance of the venue's parking lot. As a drizzle steadily soaked the group and their banners, they awaited the fulfillment of the second stage of their planned disruption — one protester confided that there were undercover collaborators inside the event.

That wasn't all, the protester said. The plan involved the tactical deployment of "Liquid Ass," a brand marketed as an "overwhelming, stinky, funny prank product."

Something, though, apparently went wrong; there was no major disruption reported by attendees, much less a liquid-ass stink bomb. (An organizer declined to answer further questions about the plan, or whether any "Liquid Ass" had in fact been deployed in the banquet hall.)

Still, at least one protester disrupted Arpaio's speech and called him a "fucking fascist."


"We are protesting Joe Arpaio because Trump may have pardoned him, but the people won’t," said organizer Susana Orozco-Gillan, referencing Arpaio's 2017 conviction for contempt of federal court.

The conviction came after a federal judge had ordered the sheriff to halt racial profiling. The thing is, Arpaio really likes racial profiling, and even he admitted that he violated the court's orders.

In pardoning Arpaio, President Trump called the criminal contempt charge, a misdemeanor, "very unfair." At the time, the sheriff borrowed one of the Trump's favorite phrase, calling the conviction a "political witch hunt" while blaming "holdovers in the Obama Justice Department."

But Arpaio lost his bid for reelection in 2016, and the whining from "America's Toughest Sheriff" didn't change his reputation for cruelty and discrimination, which he earned from the sweltering tent cities he erected as prisons and the pink underwear he forced the inmates to wear. He later lost his race for the U.S. Senate, with even GOP primary voters in Arizona deciding enough was enough.

On Saturday, Arpaio's speech — which was recorded and posted in its entirety by the St. Louis Public Radio's Jason Rosenbaum — broke no new ground. Rather, the sheriff seemed happy to dig deeper into the views that preceded his public downfall, thrilling the audience with jabs at the Obama's birth certificate and describing his conviction for a misdemeanor as "a little Mickey Mouse contempt of court."

"I laugh, all these demonstrators, when they start hitting at me, they always get to how, 'I run concentration camps'," Arpaio said later in the speech. (As sheriff, inmates in Arpaio's jail reported wide-ranging abuse. He once described busting 500 Mexicans "just for spite.")

Indeed, Arpaio made sure to throw in some immigration-related zingers. At the beginning of the speech, as Arpaio updated the crowd on his wife's condition after she'd been bit by a snake, an audience member called out, "Was it legal or illegal?"

In the laughter that followed, Arpaio quipped, "I was thinking of taking fingerprints to see if was done purposely.... It was probably a Democrat snake."

At a different point of the speech, Arpaio launched into a complaint about a "war on cops," a subject he introduced by telling the audience, "I don't want to get into the race thing," but then immediately asserted a reheated hunk of unsupportable racist bullshit, claiming, "You never see politicians of ethnic backgrounds" at the funerals of officers killed in the line of duty.

In her piece, Artman wrote that Arpaio "represents the values and principles of St. Louis County Republicans." And with their invitation, along with the table decorations they erected, it's hard to argue that point.