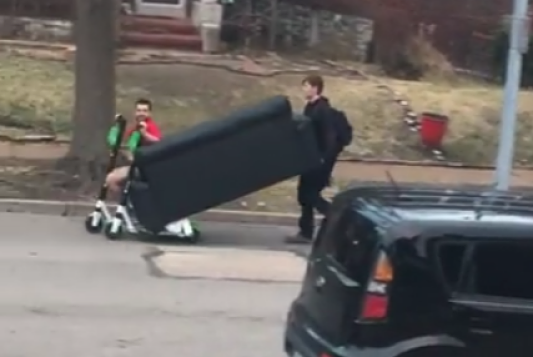 Two St. Louis men are being hailed as geniuses in recent days for finally figuring out something useful to do with those e-scooters Silicon Valley left lying all over town.

In a video captured Thursday and shared on Facebook by south city resident Ivana Bosnjak, the pair of young men can be seen employing the use of two Lime scooters to move a large black couch down a St. Louis street. The clever duo set one end of the couch on two of the scooters while one of the men held up the other end, walking behind while his buddy steered and operated the e-machines from a crouched position.

"The stuff you see in south city," Bosnjak says in the video. She tells Fox 2 that she filmed the scene at about 6 p.m. on Thursday in the Southwest Garden neighborhood. The video has since gone viral, racking up more than 200,000 views.

With St. Louis being the smallest big city in the world and all, it wasn't long before the men in the video became aware of their viral fame. Soon Matt Cortigiani, scooter navigator, popped into the comments to share some back story.

Apparently Cortigiani and his co-conspirator Alex Wheels are friends who met at Washington University. Cortigiani is preparing to move from St. Louis, he writes, and so he sold his couch to Wheels. But Wheels was unable to find a truck to borrow, so the two friends attempted to carry the piece of furniture to his home.

"As we left my apartment on Newstead and W Pine we realized we did not have the energy to carry this thing the 2 miles to his place on Shenandoah," Cortigiani writes. "Luckily, we happened upon 2 lime scooters and put our minds to work. We took turns as one person sat on the edge of the couch to steer the scooters while the other lifted the back edge off the ground. We embarked on a 2 hour journey through St. Louis, just two friends, two limes, and a 150 pound couch. Glad we could make so many people smile along the way!"

Brilliant work, gentlemen, just outstanding. Cyclists may lament Lime's decision to all but remove their bicycles from the St. Louis area in favor of scooters, but to be fair, you couldn't do this with bikes. Maybe these things are actually useful after all.

Seriously, if they stop just one St. Louis resident from toppling their entire home's worth furniture off of the roof of their car into traffic mid-move, they'll have done their job.

Watch the video below, and salute these men: