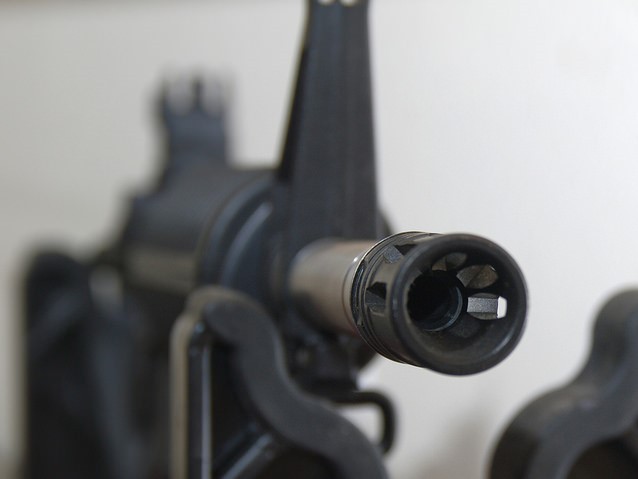 While Missouri politicians have long tried to outdo each other over pro-gun legislation, the latest bill may be impossible to top — a law mandating that every Missouri resident aged 18 to 35 purchase an AR-15-style rifle.

No, this is not the Onion. And yes, that's the very weapon targeted by gun reform activists and in an ongoing lawsuit filed by families of victims killed in the Sandy Hook massacre.

Introduced last month by state Representative Andrew McDaniel (R-Deering), the bill, titled the "McDaniel Militia Act," would create a state tax credit (capped at $1 million annually) to function as an incentive for residents not yet strapped with Big Government's preferred Big Gun — the AR-15. Purchasers could then claim the tax credit on up to 75 percent of the gun's cost.

The bill's text states, "Any person who qualifies as a resident on August 28, 2019, and who does not own an AR-15 shall have one year to purchase an AR-15... Every resident of this state shall own at least one AR-15" [emphasis added].

And that's not even McDaniel's only bill aiming to arm the masses: Two days before introducing his Militia Act, the Bootheel-area representative introduced the "McDaniel Second Amendment Act," which "requires every person 21 years of age or older who can legally possess a firearm to own a handgun."

In contrast to McDaniel's Militia Act, the handgun-focused bill specifies that Missourians purchase "a pistol, revolver, or other firearm designed to be held in one hand that is capable of firing .22 caliber ammunition or larger." (Purchasers could again receive a tax credit for complying with the law.)

Still, it's not clear what would happen to residents refusing to get strapped, as neither bill addresses penalties for those who do not dutifully go gun shopping.

Sadly for felons, who would probably would love to get in on this new proposal, the bill does carve out an exception; it only requires compliance from those who are legally permitted to possess firearms. And because of that, it's hard to quantify how just how many gun purchases would result from the bill's passage: According to state census data, Missouri holds about 1.5 million residents between the ages of 18 and 35, and about 4.5 million above the age of 21. Yet there's no precise way to know how many would be legally barred from participating, much less how many Missourians already have an AR-15.

Still, experts estimate that the national average for gun ownership is twenty to thirty percent. Even presuming that only twenty percent of Missourians already own handguns, that would still put some 3.6 million residents under the law's mandate. Using the same very rough math, McDaniel's bill would encourage more than a million new AR-15-style rifle purchases. We're guessing that $1 million tax credit would be exhausted quickly.

But don't go bounding off to the hunting supply store yet: At this point, neither of McDaniel's bills have been assigned a committee, much less scheduled for a vote. (McDaniels' office did not respond requests for comment on Thursday.) Still, we're guessing there are plenty of Missourah Republicans kicking themselves in the holster for not thinking of this first.