Travis Lee Davis' Jailbreak Is His Wildest Escape Yet, Which is Saying Something 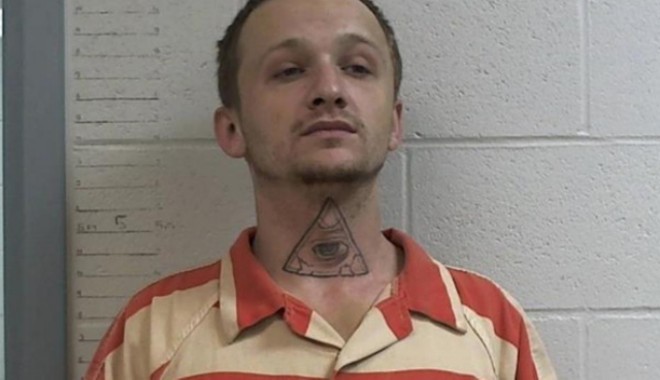 Travis Lee Davis, a 30-year-old squirrel poacher from rural Missouri, was still on the run this morning after escaping from jail in Sedalia last weekend, and later stealing a police car 350 miles south in Oklahoma.

The wiry 150-pounder with the Eye of Providence tattooed on his throat is the subject of a multi-state manhunt. Authorities say he is dangerous — and tough to hold.

Davis has a long history of running, fighting and sometimes escaping from police.

In 2012, a Missouri Department of Conservation agent described tracking him  around Morgan County in a wildlife poaching investigation. In a freezer that belonged to the family of Davis' girlfriend, investigators found deer meat, a raccoon and seven squirrels, according to court records. When they came for Davis, they had to chase him through the woods before taking him into custody, the agent says.

In 2015, Sedalia cops checking warrants spotted Davis in a house. As soon as he saw them, he shouted "These guys don't know me," and ran upstairs, police say. He smashed out an upstairs window and started climbing down the wall before he spotted another officer and crawled back inside. One of the cops fell through a floor onto the porch as they hunted through the house. Davis busted through another spot in the floor, and they eventually found him hiding under a bed, police say.

He has not slowed down in recent years, according to court records.

In February alone, he scrambled away from Sedalia cops on two separate occasions, authorities say. Officers trying to serve a warrant for parole violations managed to catch him on February 1, but he seemed to be suffering an overdose, so they sent him to the hospital. Before they could re-arrest him, he had taken off.

They tried again on February 7 after receiving a tip about his location. By the time officers arrived, he had already driven away in a black minivan with Georgia plates. Officers spotted him shortly after and chased him with their lights and sirens going. Davis sped away, crashed and ran, police say.

A witness at the scene told a Sedalia police sergeant that a man and woman had run east from the crash.

"I followed footprints leading from the crash area through fields, wooded areas, over creeks, over fences that lead in a mostly easterly direction for approximately 1.5 miles... " the sergeant wrote in a probable cause statement. "I could not locate Travis."

It was not long before police got another shot. On February 13, officers went to a house after getting a tip he was there. One officer went around back, noting that Davis is a "known flight risk" and was likely to bolt out of a window, police wrote in a report.

A woman in the house told police that Davis was in a back bedroom with her baby. When officers called for Davis to come out, he shouted he had a "motherfucking pistol" and warned them to get out, police say. He then began threatening to kill not only the eight-month-old baby, but a second woman who was also locked in the room, his pregnant girlfriend, Christole Hurst, police say.

Police eventually persuaded Davis to let them take the baby, but he allegedly would not let Hurst go. Officers could hear her crying, and when spoke, they say it was clear her captor was coaching her on what to say.

"Davis continued to make statements that he was going kill Hurst, and then himself," police say in a probable cause statement.

Davis finally opened the door and said Hurst was free to leave, police say, but it was a fakeout. He had a scarf wrapped around her throat and was choking her, police say. An officer shocked him with a Taser, but it was of no use.

"Even after a full cycle [of the Taser] Davis refused to let go of Hurst," police write.

The officer tased him again, and police were eventually able to wrestle Hurst out of his grip and put him in handcuffs, they say. Hurst later told police Davis punched her and stomped on her head before they got there. She claimed he had used meth that morning.

Davis was charged with kidnapping, domestic assault and endangering the welfare of a child and booked into the Pettis County Jail. He was there less than a month before the most recent escape, leading to the current manhunt.

In typical Davis fashion, the jailbreak was a surprising and determined affair.

Jailers in Sedalia first noticed Davis missing from Cell 2G-3 during routine checks on Sunday, authorities say. Surveillance footage and inmate witnesses revealed that he had climbed into the ceiling on Saturday night, scurried across the rafters and slipped through a hole in a concrete wall, according to a probable cause statement.

He is then believed to have climbed into a maintenance closet, leading to an exterior door. From there, investigators think, he skipped out onto the street and ran.

His travels in the days that followed are hazy. But he surfaced early Wednesday morning at Choctaw Travel Plaza, a combination gas station and casino run by the American Indian tribe in the small town of Heavener, Oklahoma.

Heavener cops and tribal police responded after a woman told casino employees Davis had kidnapped her. She claimed she had slipped away after he fell asleep in the car.

After a brief struggle, officers were able to cuff the elusive escapee and put him in the caged backseat of a Heavener patrol car, authorities say. But as officers interviewed the woman, Davis somehow managed to work his hands from behind his back to the front, force open a small panel in the backseat cage and wriggle through an opening of less than two feet into the front seat.

"He's a little skinny dude, so he just crawled through the partition in the cage and was able to get in the front," says Seale, the LeFlore County sheriff, whose department also responded.

The patrol car, a Dodge Charger, was still running, and Davis gunned it out of the parking lot. He made it less than two miles before veering off the road and slamming into a tree.

A reporter for 40/29 News would later show video of the Dodge's mangled front end, a deep V in the heavy duty push bumper.


Even that did not stop Davis, who bailed out and ran, the sheriff says. He was still in the wind this morning.

Seale says it is possible he boarded a passing freight train. There is a hub for Kansas City Southern Railway nearby.

"We have people jump those trains in Heavener all the time," Seale says.

Shortly after the patrol car crash, a tipster reported seeing a white man riding on the side of a boxcar about halfway back on the long train. Law enforcement were able to stop the train about 35 miles to the north in Gans, Oklahoma. They searched the train and surrounding area, but they did not find Davis.

Seale says they cannot be sure he even boarded the train. There have been other reported sightings. Workers at the LeFlore Baptist Association, about twelve miles north of Heavener in the town of Poteau, told authorities a soaking wet man with an eye tattoo on his throat arrived on their doorstep asking where he could find some free clothes. They referred him to another place in town, but Seale says he never showed up there.

The case took another strange twist when investigators took a closer look at Davis' time at the Choctaw Travel Plaza. Their victim in the alleged kidnapping was shown on a surveillance video gambling in the casino more than two hours before calling police. Seale identified the woman as Hurst, the girlfriend Davis is accused of holding hostage before his arrest a month ago in Sedalia.

Seale now believes Hurst was not a kidnapping victim, but an accomplice in the escapee's flight from Missouri.

"I'm going to have charges for aiding and abetting [against Hurst] because her story about being a kidnapping victim was false," Seale says, adding he also planned to charge her with filing a false police report as well.

Seale believes she gambled away her money and decided to report Davis in a convoluted attempt to get more. Once police finished interviewing her, she called her father, who wired money via Western Union to the local Walmart. She picked up the cash and drove off in her pea green 2004 Cadillac, supposedly headed home to Missouri, Seale says.

By the time Oklahoma investigators began to suspect something was up with Hurst, she was already gone. Seale says she never showed up Sedalia and her whereabouts are unknown. He says they have since learned she called Davis in the days leading up to his escape from jail, and she is suspected of driving him around southern Missouri before they ultimately traveled into Oklahoma.

It is a theory, but he wonders if she has reconnected with Davis somewhere.

"We're still looking and following up," he says.