St. Louis Police Seized the Circuit Attorney's Servers Yesterday — Then Gave Them Back 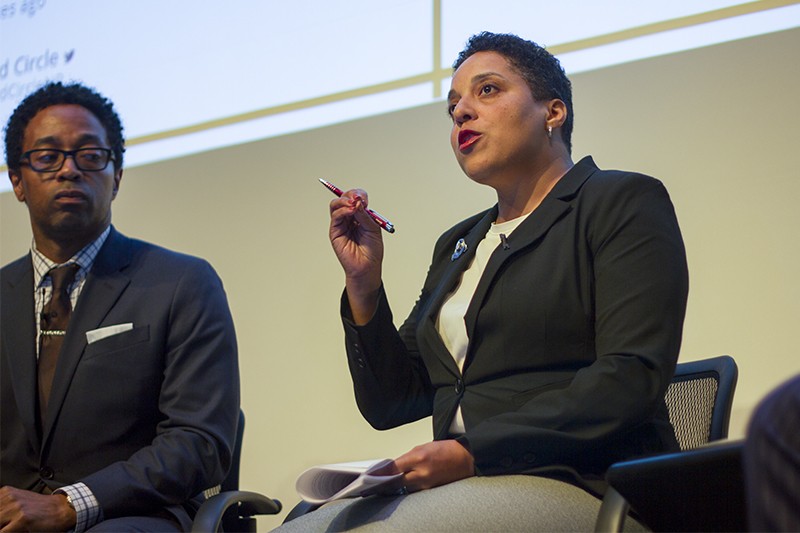 The officers, who arrived about 3 p.m., were executing a hotly contested search warrant related to a grand jury investigation into perjury during the blackmail case against former Gov. Eric Greitens. They kept the servers for an hour before returning them, according to the circuit attorney. Shortly after, an appeals court issued an order halting any more action on the search warrant for the time being.

The search was designed to "intimidate and humiliate" Circuit Attorney Kim Gardner, her lawyer says in a written statement.

“In my decades of work in the criminal justice system, I have never seen a chief prosecutor treated this way by a court or a police department,” the attorney, Roy Austin Jr., says. “I believe the true motivation of yesterday’s actions by this Special Prosecutor, the police department and Circuit Judge was to intimidate and humiliate Circuit Attorney Gardner and strip her of the powers granted to her by the people of the City of St. Louis."

The grand jury is looking into, among other things, whether an investigator hired by Gardner, former FBI agent William Tisaby, perjured himself in the Greitens case. The ex-governor was accused of taking a nearly nude photo of a woman with whom he was having an affair as a safeguard against her telling anyone about their relationship.

Gardner eventually agreed to dismiss invasion of privacy charges against Greitens rather than testify about Tisaby. The police department is now investigating the perjury charges.

Normally, that case would go to Gardner's office, but Judge Michael Mullen ruled she had a conflict of interest. He then appointed attorney Gerald Carmody, over the circuit attorney's objections, as a special prosecutor.

In a motion fighting the search warrant (first obtained by the St. Louis Post-Dispatch), the circuit attorney's chief of staff and outside attorneys argued that information on the servers was too sensitive to release. Along with information on crime victims and witnesses, it included files on investigations into "judges, elected officials, and police officers," the lawyers say.

Those cases, some of which were closed without charges, go far beyond the perjury investigation, they argue. The motion also outlines the circuit attorney's heated battle with the police department, beginning with her campaign promise to act as a "reformer."

Violent crime is down since she took office in January 2017, the circuit attorney's lawyers note. "Nonetheless, the Circuit Attorney is under a near-constant barrage of criticism from the St. Louis Police Department... for her statutorily-authorized decisions to investigate allegations of misconduct within the Department itself."

Gardner's office says that police are furious that she has challenged the department, indicting officers in shootings and placing 28 cops on a secret list of officers from whom prosecutors will not accept cases. Gardner claims the ongoing grudge motivated police to seek a special prosecutor in the perjury case.

The idea that the special prosecutor undercuts Gardner's authority is a repeated theme in the motion. "Finally, through the Warrant, and the underlying investigation, the Special Prosecutor seeks to undermine the position of the elected Circuit Attorney Kimberly Gardner, who is an African-American woman successfully reforming the criminal justice system."

All of that came to a boil yesterday, when Judge Mullen ruled Gardner would have to comply with a search warrant for the servers. Gardner's attorneys immediately challenged the decision in the Missouri Court of Appeals.

While that appeal was pending, the circuit attorney contends police officers and the special prosecutor "rushed" to seize the servers, according to a news release. It is not clear what information, if any, police were able to get. The circuit attorney's news release says the investigators couldn't figure out what information they wanted to take during what proved to be a brief window of possession.

Shortly after the search warrant was executed, the appellate court issued a stay, halting further action. Judge Mullen now has until March 22 to respond and attempt to justify his approval of the warrant.

Gardner says she's not backing down.

"Over the past two years, I have fought diligently to protect the constitutional rights of the people of St. Louis, including the private information of victims, witnesses, and defendants," she says in a statement. "I will not allow anyone to interfere with the important work the people have elected me to do."