Ilsa Guzman-Fajardo Was Set to Be Deported. ICE Released Her 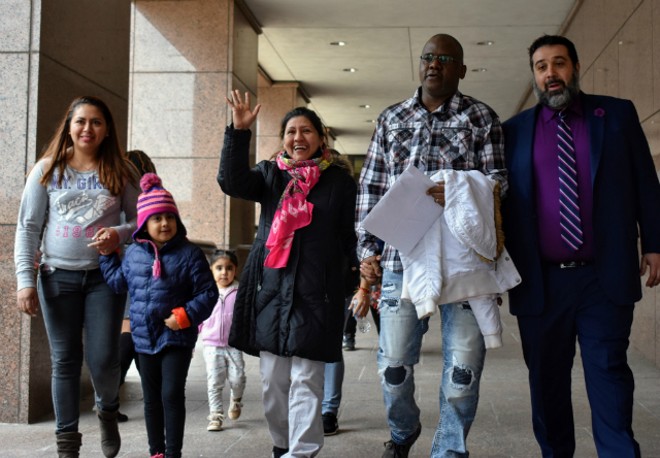 A St. Louis mother slated to be deported was freed by immigration agents this morning following a federal judge's order.

Ilsa Guzman-Fajardo, 48, hugged her husband and other family members in a tearful reunion in the lobby of the Robert A. Young Federal Building. It was one month to the day that she was taken into custody in the same building during what she thought was a routine check-in with Immigration and Customs Enforcement.

"I missed my family," she later told reporters gathered outside. "I'm so happy."

It took an eleventh-hour hail mary from Guzman-Fajardo's attorney, Javad Khazaeli of Khazaeli Wyrsch, LLC, to keep her in the country. After more than four years of regular check-ins with ICE and monitoring that included weekly home visits and an ankle monitor, ICE had decided to enforce an order of removal signed in California in 2000.

Khazaeli, who took over the case recently, is fighting to reopen that nearly twenty-year-old case in California. But in the meantime, he filed a writ of habeas corpus in the federal Southern District of Illinois, which has jurisdiction over the Pulaski County jail where Guzman-Fajardo has been held pending her deportation to Honduras. Khazaeli argued her detention was illegal because, among other problems, her original notice to appear in court in 2000 didn't provide her with the time or date.

A federal judge in the southern district agreed to put a hold on the case and set a hearing for the government and Khazaeli to make their arguments. Instead, the government agreed to release her — at least for now. Khazaeli still has a long road to reopen the case in California, but staving off his client's immediate deportation was a major victory, he says.

"Until the judge issued the stay, [Guzman-Fajardo's] removal was imminent," Khazaeli says. "It could have happened any day."

The St. Louis resident went on February 12 with her former attorney and supporters to ICE's field office in the federal building. She was soon separated from the others, taken into custody and told she would be deported within seven days. An ICE spokesman has said the agency previously took her into custody in 2014 but agreed not to deport her because her youngest child, a United States citizen, was still a minor. Her son has since turned eighteen, and an immigration judge in December rejected a previous bid to reopen her case in San Diego.

After that, the spokesman said, ICE had no reason not to deport her.

But her attorney says she was never given a fair hearing on her original request for protected status because of the missing court dates. Being summoned to court without a time or date used to be common in immigration cases, but the Supreme Court ruled last year it was illegal.

Because of that, Khazaeli says he is optimistic. He is also negotiating with federal authorities in hopes of securing a settlement that would allow Guzman-Fajardo to pursue her green card.

In her nearly two decades in the United States, almost all of it in the St. Louis area, she has worked and stayed out of trouble. She had three cleaning jobs at the time of her arrest. She was also seeking permanent resident status following her marriage in June to a citizen, Steve Miller. That petition is still pending.

Miller says ICE has treated her like a common criminal, instead of a hardworking mother.

"It was wrong the way everything went," Miller says. "I'm glad she's going to be back home."

After ICE took her one month ago, Miller routinely made the 150-mile drive to southern Illinois to visit. He says he always believed she was coming home.